The Maple Leafs' defence has come under a lot of criticism lately for "fronting". Fronting is a defensive strategy where the defencemen will stand in front of forwards, attempting to block shots and passing lanes to prevent forwards from getting attempts on goal from close in. The upside to this strategy is that less shots get through to the goalie, requiring him to make less saves, and ideally preventing difficult saves like tips from the slot. The downside to this strategy is that, when the puck does get through, the forward often ends up with an unchallenged rebound attempt. Additionally, it creates screens, because defenders are standing directly in front of the goalie rather than trying to clear the crease. 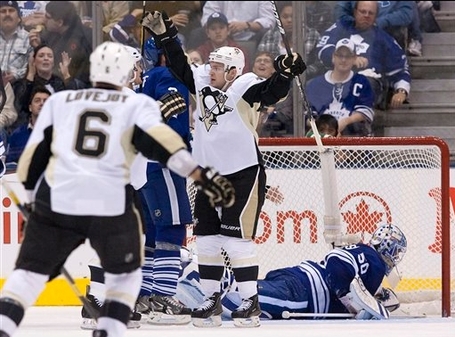 The question I'm going to try to answer here is whether or not fronting provides a sufficient volume of shot blocks to be worth the extra goals that it allows. This question is impossible to answer with certainty, for a number of reasons. One of them is that it's impossible to determine how many goals wouldn't have occurred if the defenders hadn't been fronting. Another is that it's not possible to determine how many additional shot blocks were caused by fronting and how many would have occurred otherwise.

Because of those difficulties, I fully acknowledge that the answer I provide here is just an estimation, and I invite suggestions in the comments as to how the measurement could be improved.

Here's how I'm going to try to answer this question - how many more shot blocks does the Leafs defence have than the league average (minus Toronto), and how many goals would that theoretically have prevented at the Leafs' current team SV%? The result is the number of "acceptable" goals the team can allow from fronting, ie. the point at which fronting is allowing more additional goals than it prevents.

The league average is 92 blocked shots. The Leafs have 118 blocked shots. The difference (26) multiplied by the Leafs' team SV% (.899) gives us a little under 3 goals. If the Leafs have allowed more than 3 goals due to fronting, then it appears to be a bad strategy. I'd say they've definitely allowed more than 3 goals due to fronting, as at least 2 and possibly all 3 goals scored by the Penguins just last night could be blamed on fronting. So it appears that the strategy is causing more goals than it's preventing.

Some of the other teams in this list probably employ fronting, or other techniques designed to block lots of shots, though. The Leafs' defence has the second most shots blocked in the league (only Montreal, at 135, has blocked more). How does fronting perform when compared to the worst teams in the league at shot blocking, rather than the average?

The bottom 10 shot-blocking defences average 74 blocked shots, 44 less than the Leafs. At that rate, fronting can allow aout 4-5 goals before it becomes a net drain. Not a significant difference between that and the league average. this is just off the top of my head, but I'd say the Leafs have definitely allowed at least 5 goals that could be blamed on fronting so far. So my conclusion is that (caveats above taken into account) fronting is not a productive defensive strategy.