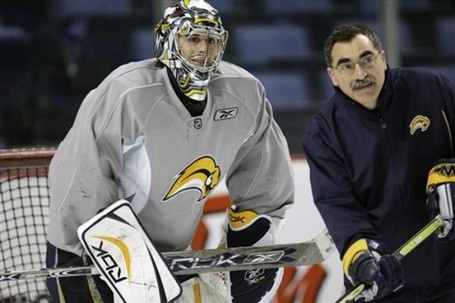 Among the advanced hockey stats that have gained traction in recent years, particularly among hockey bloggers, Corsi (or shot +/-) is probably the most frequently used. The idea behind using Corsi is that it's a good proxy for possession time, which is something that the NHL doesn't currently track. In order to try and test this out, I decided that for the Toronto Maple Leafs game last night against the Phoenix Coyotes, I'd track puck possession and see what the results looked like. If you want to know how I did it and what the results were, then follow me past the jump.

The first question that you probably have is what exactly I did, so here's an explanation: I decided that I would track how long each time had possession of the puck in the offensive zone. Because it would be virtually impossible to track each minor puck movement, I decided to use a bit of a simplified measure - I counted the beginning of an offensive zone possession as the time at which the attacking team first gained clear possession of the puck once it was in the offensive zone, and I counted the end of the possession as the time at which either the puck left the zone, or the defence was in clear control of the puck and not under significant pressure from a forechecker. Obviously there's some subjectivity involved in that, but given how quickly the game moves I think that was a good compromise between good data collection and mental sanity. As I discovered while recording time on attack, even that somewhat loose definition of a possession can be difficult to track in real-time, but I think the results I've gathered are on the whole pretty reliable.

First I'm going to take a look at overall time on attack in each given period, before breaking things down into a bit more detail.

On the basis of time on attack, Toronto was clearly the better team. The worst period for the Leafs, the 3rd, was better than even the best period for the Coyotes. Toronto had a decent advantage in the first period and a huge advantage in the second period, before a roughly even third period. On the whole, the Leafs had a territorial advantage of over four minutes during regulation. I'm leaving out OT data for now so that these numbers can serve as a comparison for non-OT games in the future, but I'll include some OT numbers before concluding.

One thing that I realised while tracking this data was that there are a pretty large number of shifts where the team has the puck in the offensive zone, but nothing really happens. Generally these shifts last only a few seconds, such as when a player skates into the zone with the puck, throws it behind the net when pressured by a defender, and then loses possession as a defender safely passes the puck out of the zone. In order to see how that affected things, I counted up the number of attacking shifts that each team had that ran for at least 10 seconds, which seemed like roughly the amount of time where a team has clearly got control of the puck (though not always).

While I thought these numbers might tell us something that the standard time on attack data doesn't, it turns out that I was wrong. This data more or less matches up with the data presented above, and the ratio is only 1% different, so they're pretty much identical.

The big question that's left to answer is how closely these numbers line up with the Corsi numbers, so here's a comparison of the time on attack (TOA) ratio to the Corsi ratio. I'm going to throw the Fenwick ratio in there too, as another point of comparison (Fenwick is like Corsi, but unlike Corsi it doesn't include blocked shots). These numbers include over-time, where as it happens the Coyotes had just a 3 second territorial advantage.

The end result is more or less what Corsi proponents would argue - the numbers are very similar. The difference between Corsi and the time on attack is pretty small. The difference between TOA and Fenwick is a bit bigger. On the basis of this particular game, it seems like the claim that Corsi is a good proxy for puck possession has some weight to it.

Clearly since this is only one game's worth of data, the data set is very small, but I think what I've collected here is pretty interesting, and I'll keep doing it for the next few games to see if any of the information presented here is confirmed or contradicted, and if any other interesting details emerge.