Saying "hate to say I told you so" would be a bold-faced lie. I enjoy being right, even if it's about something that pains me.

Since the beginning of the season, Danny Gray's (@ACatNamedFelix) unbridled "PLAYOFFS!!1" optimism has been pitted against my own "REGRESSION IS NIGH" negativity, and while the Leafs have yet to slide out of the playoff picture - they may well not at all this season - they've definitely regressed closer to a spot in the standings more commensurate with my own expectations.

Behold, this table taken from a recent James Mirtle article at the Globe and Mail: 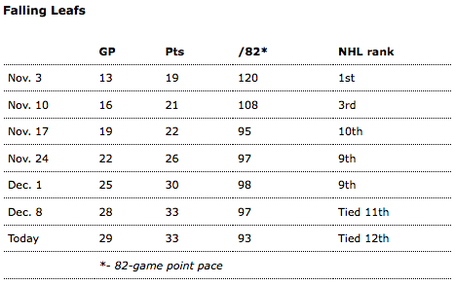 Jump for other, non-depressing links and factoids.

The Full Brian Burke Interview: Beyond the Barn Fight
You may have already seen this, but Justin Bourne has posted a much longer segment of this video at Backhand Shelf. Some really interesting stuff in there.

How a young Leaf fan found camaraderie up in the old 'greys' at Maple Leaf Gardens
A podcast and more reminiscence from Michael Langlois at Vintage Leaf Memories.

Weekend Recap: Marlies win Back to Back, Scrivens Looks Good in Both
Kyle The Reporter with a few updates from the farm.

Leafs Ownership Change & Why It Makes Sense
Mitch Smith at AIH has a quote from our very own PPP to support his opinion.

Carlyle's vaction is over + 30 Thoughts
The latest from Elliotte Friedman. You read now.

Yes, There's Hockey Without Fighting
Andrew Podnieks at Slap Shot - from The New York Times hockey blog - with a couple interesting thoughts. He clearly forgets the rise in number of Leafs fights since Brian Burke has arrived, but hey, I can let that one slide.

Kaberle enters Bell Centre on home side
Oh, Kabby. I can't believe it's come to this. From Bill Beacon of the CP via the Globe.

Crosby trudges back to the sidelines with concussion-like symptoms
David Shoalts from the Globe reports that Sid's had a setback.

Have You Noticed?
5 crazy things from page one of the NHL's scoring leaderboard. From Justin Bourne at Backhand Shelf.