In one final move to wring every last dollar out of their beloved cash cow Toronto Maple Leafs, news has broken that the Ontario Teachers Pension Plan has mandated the signing of young center Justin Bieber. Bieber, who at one time may have been inside a hockey rink, was spotted today in the Leafs dressing room at the Air Canada Centre canoodling with his new teammates. The young London, Ontario native is expected to center a line between Phil Kessel and Joffrey Lupul for Thursday's match-up with the Buffalo Sabres. As with all Leafs signings, financial details were not disclosed. More after the jump...

Little to nothing is known about Bieber's experience in hockey. Below is a picture that *allegedly* shows a young Bieber on the ice in full gear. But honestly, one can't be sure. 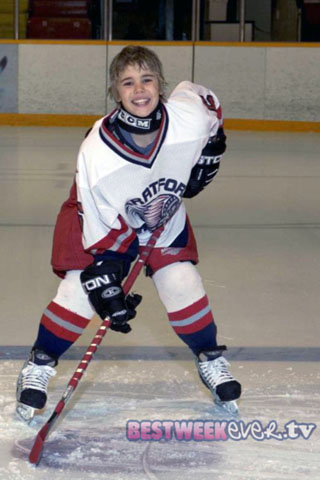 When asked about the move, a visibly distraught Brian Burke punched a hole through the cement wall he was standing next to and stormed off. Certainly one has to question the strange timing of the move, as the Leafs are healthy down the middle and have more depth in the AHL with the likes of Joe Colborne and Mike Zigomanis. Other Leafs, however, seemed to welcome the news. Rookie defenseman Jake Gardiner was anything but subdued, screeching "OHHH MYYY GODDDD! I LOVE HIM!" before fainting in the corner.

Richard Peddie, Chairman of MLSE, spoke briefly with reporters after the news broke. "MLSE and the OTPP have become increasingly concerned with our TV viewership figures in the always important 11-14 year old demographic. We feel that signing a fresh young face like Justin Bieber will bring both instant and long lasting returns." Peddie later added, "Mr. Bieber will also be responsible for singing both national anthems and will be the only intermission entertainment. We have struck a deal with the NHL to extend the intermission from twenty to thirty minutes for all home games." When asked how the move would impact the on-ice product, Peddie seemed confused and unable to answer the question.

In order to allow Bieber to forgo the draft, the Leafs agreed to give up all 2012 and 2013 draft selections. PPP has learned that a "completely random" lottery system has awarded all fourteen picks to the Pittsburgh Penguins.

Stay tuned to PPP for all your Leafs news!