Leafs Shut Out Bruins Once Again

Share All sharing options for: Leafs Shut Out Bruins Once Again 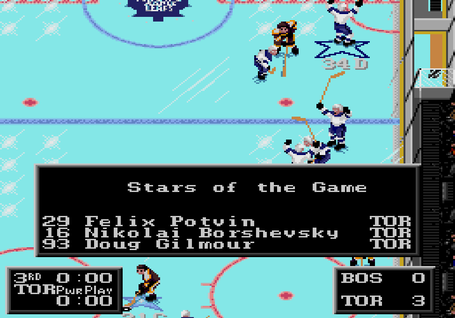 Felix Potvin was perfect, and the Toronto Maple Leafs' defence played a virtually-flawless game at the Boston Gardens to win 3-0. The high-octane Bruins' offense was ineffectual and superstars Adam Oates and Raymond Bourque were often completely invisible.

Nikolai Borchevsky lead the attack for Toronto, scoring two goals (one on the powerplay), with Dave Andreychuk picking up a pair of assists as well.

Boston got themselves into trouble early on the power play, when, after some heavy pressure, Gilmour skated to the half boards, stopped, turned around, skated untouched in a straight line across the slot, and slid the puck past a sprawling Andy Moog.

There was a scary moment mid-way through the second, when a crushing open-ice hit from Wendel Clark on Cam Neely left the Boston forward twitching mechanically on the ice. The Bruins were vague about their description of the injury, saying only "out for game". No official updates have followed, but rumours around the dressing room suggested that Blank may require surgery to repair a damaged pixel in his left knee.

I'm through hearing about how the Leafs can't pick up a secondary chance against Thomas or Rask, can't skate through the neutral zone with the puck, and eventually make horrible defensive lapses. Let's just live in denial for an evening. Throw your own game details in the comments.