How Long Will The Maple Leafs' Window Be Open?

Share All sharing options for: How Long Will The Maple Leafs' Window Be Open?

So a couple of days ago, after watching yet another Leafs loss in 86" of gory glory, I caught myself briefly agreeing with people that think making a trade of one of our young D men makes sense going forward. Luke Schenn, Keith Aulie, and Jake Gardiner had all made significant gaffes in the loss to the Panthers, and while the goaltending didn't help, I kept asking myself - are we really prepared to wait for these kids to develop into reliable D men?

The reason this jumped to the forefront is actually not a result of their defensive play at all, but more the play we're witnessing out of Phil Kessel, his linemate Joffrey Lupul, and the likes of Tyler Bozak, Mikhail Grabovski, Clarke MacArthur, Tim Connolly, and to a lesser extent Nikolai Kulemin (who is in the midst of a definite down year).

What pray tell do our young D-men have to do with our top 6 forwards? Well you see the question we have here is one of windows. When do they open for business, when are they closed, and how long can we keep them open to fit as many talented players into the organization as possible.

To this end I began with a premise around goal scorers - largely on the basis of the idea that goal scorers peak fairly early in their careers. I know work has been done on this in the past, but I felt like crunching the numbers myself to see if I could break it down a bit more in terms of "similarity" amongst players - as a means of identifying who we can look for the Leafs forwards to parallel after a fashion, career wise.

So with that idea in mind, I collected the career data for all players to register a 30+ goal season in the last 20 years of NHL hockey. There are 219 names on that list, and while I won't list them all off, what I will do is mention that it gave me over 2000 seasons of data, and a pretty clear impression of how a goal scorer typically operates.

Below is the graph with all 2000 points of data and a 6th degree polynomial trend line that shows a distinct peak around years 24-26, with a slow decline from 28 on-wards. Generally scorers hit their real stride in their 4th year in the NHL, and they produce at the high end for only 3-4 years. 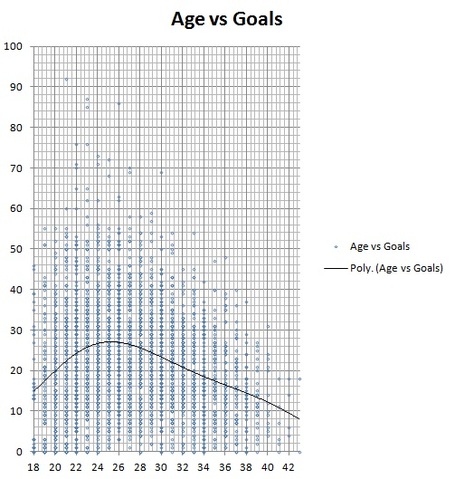 The guys that start younger typically climb higher produce longer, so in that aspect, Kessel is a true asset. Players that score 30 goals regularly before they turn 25 are not plentiful, in fact there have only been 49 players to do so 4 or more times in the last thirty years of NHL hockey. Kessel is easily on track to be the 50th this year, joining the likes of Marian Hossa, Zach Parise, and Eric Staal. Of the 49 other players, only 9 remain active in the NHL. The others are Jaromir Jagr, Ilya Kovalchuk, Alex Ovechkin, Sidney Crosby, Marian Gaborik, and Rick Nash. Suffice it to say, Kessel is in VERY elite company from a goal scoring perspective.

Interestingly to Leaf fans, Kessel's production appears to generally mimic that of slightly older players like Zach Parise and Derek Roy relatively closely. Other names of note for their similarity in style of play I looked at were Tony Amonte, Petr Bondra, Petr Klima, and Simon Gagne. Just for kicks I threw in Jarome Iginla and Marian Hossa:

So what does that say about Kessel? Well considering how productive the guys on the list above have been past the age of 26, I think we can assume Kessel will stay productive for a few more years yet. In essence, I think what I'm saying - which contradicts my original perspective - is that the Leafs window doesn't close anytime soon. In fact, it likely doesn't close for another 5 or 6 years at the earliest.

So do I think the onus is on the Leafs to win right now? No - I don't. They're a marginal playoff team at best at the moment, and I don't think there's an easy quick fix to make them one. They need more size up front, and they need a reliable defensive D man to act as a calming influence on the back end.

I've proposed this recently in a number of forums, but I would advocate that the Leafs stand pat to some extent. Adding a free agent D man like Tim Gleason or Bryan Allen of the Carolina Hurricanes, or perhaps acquiring one via trade, would help the balance of this team.

The next issue on the horizon for the Leafs is the fact that there are too many bodies going forwards. Management brought John-Michael Liles in to compensate for the departure of Tomas Kaberle, but they didn't anticipate the accelerated development of Jake Gardiner. They also now have three young forwards in the form of Nazem Kadri, Matt Frattin, and Joe Colborne that are pretty obviously ready for a full time shot at the NHL. Their development may be painful at times, but in 3 or 4 years, the Leafs could be quite formidable up front if they retain the trio in addition to the likes of Kessel, Kulemin, MacArthur, and Bozak. Tim Connolly is likely sticking around for another year, and thus the odd men out become Mikhail Grabovski and Matt Lombardi.

Grabovski is unrestricted at the end of this season, and he and Liles would likely both fetch a decent price at the trade deadline. Both should be moved for prospects or picks. In terms of defensive shut down players, Schenn and Aulie nead seasoning, but it's very early to give up on 22 year old D men. If you examine the careers of other shut down defenders, they didn't really see much success while playing big minutes in the NHL until the age of 23-24. Think names like Anton Volchenkov, Robyn Regehr, Adam Foote, Brooks Orpik, etc.

Korbinian Holzer also deserves a chance on the Leafs blue line, and at 24, he too is probably ready for the NHL. Mike Komisarek likely isn't the answer for the Leafs, but with Jeff Finger coming off the books after this season, there's room in the AHL for an overpriced mistake on the blue line.

I don't think the Leafs are building for this year, and they shouldn't even realistically be building for next year. As painful as this long slow process is, I think we're looking at 3 or 4 years from now (still), and it doesn't hurt to add picks and prospects to the group we've already got. Think about the likes of Stuart Percy, Greg McKegg, Jesse Blacker, Tyler Biggs, Brad Ross, etc. and then ask yourself if you think the current Leafs club can seriously compete with Boston, Philadelphia, Pittsburgh, and the NY Rangers in the East as it currently stands.

The new conference format doesn't make things easier with more battles vs. Boston on the horizon. This is what we have to look forwards to, and I hope the Leafs management group is taking a long term outlook on the whole process, rather than a myopic view - often the one shared by many Leafs fans. We aren't built to win in the playoffs just yet, and that's something we need to come to grips with. With experience will come more success, and over time we'll see that develop. Here's hoping we have the patience to wait out the slow rising of the Leafs.