Share All sharing options for: In Which Ron Wilson Trolls Damien Cox

In the week prior to Saturday's game against the Boston Bruins came news that James Reimer had been cleared by team doctors to return to the team, and would be the backup to Jonas Gustavsson. Said Wilson in his Friday press conference:

I’m not being definitive on anything, but we’ve told Gustavsson that he’s going to be playing tomorrow.

Come Saturday night, it was James Reimer starting between the pipes. This decision by Wilson to start Reimer, despite leading on that Gustavsson would get the start, upset noted phallic look-a-like Damien Cox. From Damien Cox's Twitter feed last night and into this morning, (which I can't directly link to because I've been #CoxBlocked)

Leafs mislead media, then are astonished when we go find other sources for information. This strategy didn't work for JP Riccardi, either.

People in sports believe its not lying when done for strategic reasons.

Three years missing the playoffs and the genius still thinks he's smarter than the rest.

Hmmmm. Wonder why nobody believed the Leafs when they say Reimer didn't have a concussion....or when say their coach isn't going anywhere...

Continued after the jump.

As a franchise, top to bottom, Leafs are consumed - and distracted - by trying to out-maneuver the media. Shud (sic) focus more on winning games.

One more reason to like James Reimer: his honesty. Perhaps he could explain the concept to his coach.

Those who endorse a coach's right to lie shud not then be pissed when coach tells your kid he's got a spot on the team....then doesn't.

All I can tell you is JP Ricciardi's road outta town started with one ridiculously obvious lie.

In a word, Damien Cox was butthurt. But head coach Ron Wilson frankly doesn't care. From his own Twitter feed this morning: 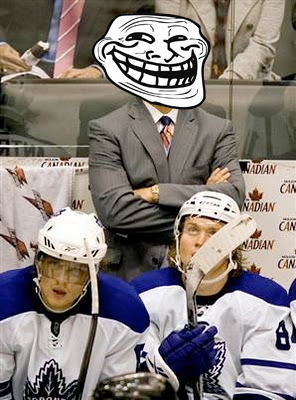