I've talked before about Cardboard Gods, both the book (which I am now halfway through) and the blog, which is basically a team-agnostic baseball-oriented Leaf of the Day (which I have been very lax with, I know).

Quietly, though, Cardboard Gods has been waging/documenting one of the most dramatic battles of our time.  In a single-combat winner-takes-all showdown, Love is facing off against Hate.  Sadly, as it seems to occur far too often in this world, hate is on the verge of winning, with love literally down to its last strikes.  I don't know what it says for us all if this is indeed the final conclusion, but it sure can't say anything good.

I've long been of the opinion that there are no redeeming qualities in 1978 baseball.  The set is boring, the design is meh, the card backs are mud-brown and have all the pizazz of yesterday's left-open ginger ale.  Where in other years there would have been a cartoon and some minor factoid, there is instead a not-terribly inspiring kids' game called "Play Ball".  It is so uninspiring that in thirty-plus years of owning various instances of 1978 baseball cards, I have not once felt compelled to play it. 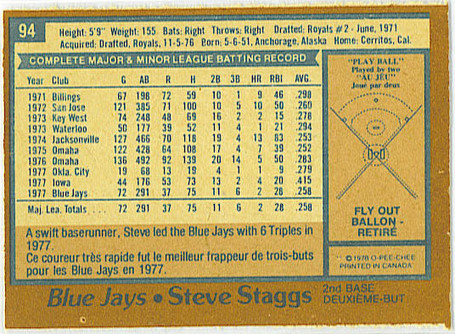 Thanks to ex-Jays workhorse Jim Clancy, I now at least know the rules.  Each side has a deck of 50 cards.  These are to be turned over in succession until three outs have been made.  Hits and runs scored are tracked through a nine-inning game.  It's not really a strategy-based game, unless the kids were smart enough to stack their decks with a bunch of run-producing cards and remarkably few out cards.  Love, I know, has far too much integrity to pull this stunt.  I'm not sure I particularly trust Hate on this score. 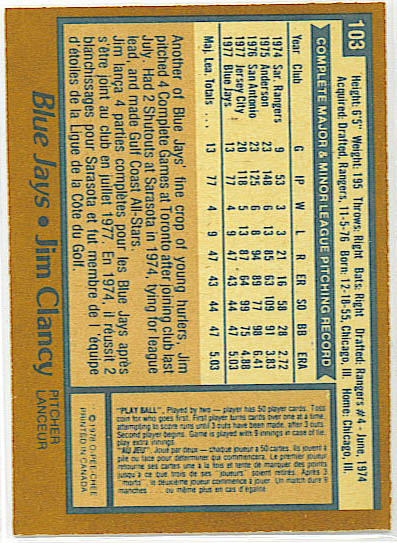 Now you too can barely read the rules in both official languages!

Over at Cardboard Gods, he is working with the 1978 Topps set and has presumably culled two fifty-card decks from the full 792-card set.  Love and Hate have combined for 12 runs through 8 2/3 innings.  This is enough to tell you that he is using Topps.  I am not convinced that it is possible to score 12 runs using 1978 OPC, which is what I have.  My completely unscientific assessment of that set is that it consists of the rules card (Jim Clancy), one single (Roy Howell) and 262 cards that make some sort of out, thus making OPC Play Ball the worst baseball game ever devised.

OK - I'm exaggerating.  OPC had half a dozen leader cards as well as team cards for the Expos and Jays, and these aren't part of the game.  Given this, it's more likely that there are just 254 out cards.  Don't believe me?  I have in my possession an unordered stack of 1978 OPC.  For the first time ever, I will attempt to play this game.  (Man, the things I do for this place....)

Card 7 - NL ERA leaders.  Doesn't have a game bit (told you this was a random sample).  Off to a rousing start.

Card 135 - Gary Carter (Expos (sigh)) - Holy cats - Gary singles!  Not sure to which field, but Gary's a righty so we'll say he pulled one past short.  Man, I may have underrated this thing!

Card 30 - Don Gullett (Yanks) - flies out.  I call shenanigans.  Gullet's an AL pitcher.  He has no business batting in this game anyway.  Who on earth screws up their lineup so bad that a pitcher has to bat in the first inning?

So to recap - we've got two out and a man on first, top half of the first inning.  Coming to bat, it's card 114 - Andre Thornton of the Indians.  Andre...  tells us the rules of the game again.  It's really not that complex, Andre, we figured it out some time ago.

Next up is card 56, Rick Reuschel of the Cubs.  OK, at least Rick is allowed to bat.  Rick - good gravy - DOUBLES!

This is where it gets complex.  Do I assume that a runner on first would score on a two-out double?  It's Gary Carter on first - could he still run in 1978?  Over at Cardboard Gods, there are established rules for this.  Let's look it up (doop de doop, looking it up...).  OK, it seems that when in doubt, I am to cheat.  Carter scores because he's an Expo.  Reuschel on second with an RBI.  Note - the Cubs jammies they wore on-field in 1978 are a complete embarrassment.  I don't have Reuschel scanned and I'm not sure I can stand to.

Card 46 - Steve Stone (ChiSox) - Steve, my third pitcher this half-inning (told you this was random), strikes out, leaving the jammies-wearing Rick Reuschel standing on second.

But we did score a run, mainly because I decided we did.  I have to say, I actually like that aspect of the game.

Now, that took seven cards, which suggests my deck might not actually make it through eight innings without a reshuffle.  All in all, though, this game sucked less than I really thought it would, mainly because of Rick Reuschel's jammies.

Looking through the rest of my stack, I see a few things worth mentioning.  Rod Carew, whose tee-ball set I had as a youngster, draws a walk.  Bucky (something) Dent flies out.  Red Sox Nation rejoice.  Pete Rose walks, as does Thurman Munson.  A very young Dave Winfield triples.  There are even a pair of homers - Roy White of the Yanks and Phil Garner of the Pirates.  For all my grousing earlier, I might not actually have enough outs to make 27.  This could play out more like one of those 65-38 slow-pitch games.  (I was actually in one of those.  We won 72-8 on the back of a 19-run fourth inning in which one player (no, it wasn't me) made all three outs.)

Seeing all of this, I'm a little curious how the set size of OPC impacts the game play.  OPC in 1978 was just 264 cards - one third the size of the Topps set.  It wasn't a random sampling, though.  What OPC did was give a full compliment of Blue Jays and Expos, inlcuding team cards, a pair of checklists plus the leaders and record-breakers.  This left enough cards to print about eight to ten players per non-Canadian team.  The impact of this is that 1978 OPC is a set heavily-weighted towards star players.  There are 500-odd cards dropped, mostly guys you've never heard of.

One impact of this is that it makes the Jays and Expos look like a bunch of schmoes.  While there are lots of Jays cards showing guys who hit .167 in limited at-bats or middle-relievers with a 6.15 ERA, no other team appears to have these.  They did in reality, but not in OPC.  There was no room for them.  Only the top handful of performers got cards.

For the game, though, and maybe I will actually check this out now, dropping 528 cards could really skew things.  If there was a tendency to give offensive events to star players, then the OPC "Play Ball" game would be absurdly offensively-oriented (except for the Jays, who keep making outs because let's face it, a lot of them actually were schmoes).

At Cardboard Gods, though, he's using the 1978 Braves, which were not quite as bad as the 1978 Blue Jays but also weren't significantly better.  Their schmoe content seems alarmingly high.  The game stands at 7-5 thanks to a two-out, two-run single by Tom Paciorek of Hate (why, Tom, why?).  Love, staging a late rally, put runners on first and second with just one down, but Joe Nolan flied out without advancing anyone and neither Roy White nor Phil Garner were Braves in 1978.  It ain't looking good.

Back to the original thought, I'm not sure just what it means if Hate wins this thing.  To me, I think it means that 1978 baseball sucks.  It's a good place to put the blame.  The game, however, is a bit better than I gave it credit for.  I might actually play it.  I don't think I'll put as much on the line, though.  I need teams that don't carry that weight.  I think I'll play Ambivalence vs Slight Disdain.  It's better for the world that way.