Phil Kessel and his Superstitious Sticks

Share All sharing options for: Phil Kessel and his Superstitious Sticks

Hockey players are notorious for being superstitious beings. There's Sidney Crosby and his pre-game PB&J sandwich. The time honored tradition of growing a playoff beard. Guys like myself who always put on right handed pieces of equipment before the left (all of them). However, if there is one thing that hockey players are more superstitious about than others, it's their lumber. Hockey players loves their sticks like parents love their newborn children; unconditionally and sometimes a little over the top.

Every piece of tape must be in exactly the right spot or else it all gets ripped off and you start over from square one. Heel to toe, blade facing the same direction as you work. If there is one player on the Maple Leafs who is more devoted to his sticks than his peers, it has to be Phil Kessel.

Kessel is so caught up in the specifics of his stick that the way in which he tapes it may have even played a part in breaking his 14 game goal scoring slump. Follow me after the jump for some investigatory work.

As Chemmy showed us from our trip to Toronto and Real Sports over a month ago, at the time of the Washington Capitals game (January 22nd) Kessel was using a Bauer TotalOne stick which a special clear tacky candy cane put on especially for him by the nice people at Bauer. That was game 5 of his 14 game goalless drought. By game #14, February 12th against Montreal, Kessel has ditched the clear tacky candy candy and gone back to his self-done white tape candy cane over the TotalOne as shown below. 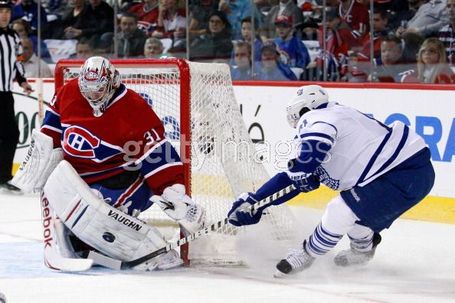 via cache1.asset-cache.net
Then came the Tuesday game against the Boston Bruins, and Phil had had enough of the white tape candy cane. Enter the black tape candy cane and a 2 goal night marking the end of a 14 game drought and the first time Kessel had scored against his former team. 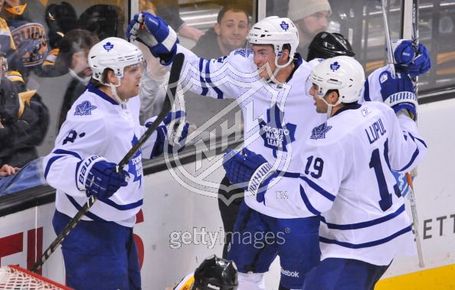 via cache3.asset-cache.net
Since then, Kessel has continued to use the black candy cane and it's paid off to the tune of 4 goals in 4 games.
ALL HAIL THE BLACK TAPE!!