(Note - this actually was written yesterday, but I got pulled away before I could publish.)

52 years ago tonight, March 11, 1959, the Leafs had a home game they really needed to win if they wanted to keep their playoff hopes alive. Facing first-place Montreal, they got pounded 6-2. This loss put them 10 games under .500 at 22-32-11 and left them pretty much buried in fifth place, seven points back of the New York Rangers with only five to play.

Those Leafs were kind of a funny team. They were inconsistent. They'd look like world beaters one minute and then get smoked by a weak team the next.

There had been a ton of roster turnover. They were dependent on a lot of young players at key spots - both on the blue line and up front. Severely lacking in depth at centre, the GM had plugged holes with minor leaguers he'd known from other organizations and other teams' castoffs. A goalie brought in for depth purposes ended up the season as the clear starter.

The Leaf season would end on April 18 with another loss to Montreal. This time, it was 5-3 at the Forum. That was game 5 of the Stanley Cup Final.

Between those two losses came a pretty wild ride. The Leafs would run the table, winning their last five. This included a pair against the Rangers, who lost six of their last seven. The Leafs would come back from two goals down on the very last game of the season to clinch a playoff spot, something Punch Imlach called the most exciting moment of his career - moreso even than the four Cup wins he'd later have.

The Leafs, as the four seed, drew second-place Boston in the first round (I have no explanation at all for the 1-3/2-4 playoff system the NHL used at that time). They beat the favoured Bruins in seven after dropping the first two on the road, then winning both home games in OT. The hero was Gerry Ehman, with six goals in the series. More on him in a minute.

Now, I've overstated the parallels above and there are as many significant differences between the Leafs of 1958-59 and today as there are similarities. If there's one thing I want to capture, though, it's that it's never over until that little 'e' shows up next to your team's name in the standings. In the last game of the season, when the Leafs were down 2-0 after one, Stafford Smythe came down to congratulate Punch on a great run. Punch told him to stuff it, as they weren't dead.

The Leafs got beat by the Habs in the Final. Montreal was too strong and the Leafs weren't ready yet. The Leafs' best chance in the series came when a George Armstrong shot went through the net without anyone noticing. Instead of tying game 4 and potentially the series, the Habs won, went up 3-1 and finished the Leafs off at home in game 5. Still, this run established the Leafs as contenders. They grew as a team, battle tested many of their players and came back stronger. They'd be back in the Final in 1959-60, and would win it all four times between 1961-62 and 1966-67.

Gerry Ehman never got a real chance to play until he was 26. He'd had a single game with Boston in '57-58 and six with Detroit in '58-59, but otherwise had been fated to the minor leagues. Punch Imlach, however, had had Gerry with the Quebec Aces and knew his abilities. With the Leafs needing scoring and some size up front, Gerry was picked up in December.

Right away, he clicked on a line with Billy Harris and Frank Mahovlich (the HEM line). In his 38 games, he had 12 goals and 13 assists. He then led the Leafs in playoff scoring with 6 goals and 13 points in 12 games.

That was really the highlight with Gerry. His fate was to be one of those guys who help a team along the way, but then get shoved down the depth chart as a team gets better until he's just a memory by the time the team is fully developed. In a full season in 1959-60, Gerry scored just three more points than he had done in 38 games the year before. He'd play 14 more games in 1960-61, then be sent down to Rochester. He'd make one last appearance in 1963-64, playing four regular-season games, but then he dressed for 9 in the post-season, a role-player on his only Stanley Cup-winning team.

I've had Gerry Ehman scanned for years, along with some other 1959 players (and one entire team set I won't mention by name), waiting for the moment when the Leafs would actually be playing relevant hockey in March. It has been a long time.

Visit the Gerry Ehman Gallery at the HHOF.

A video about that comeback:

And a look at that final:

- Claimed by Boston (Springfield-AHL) from Detroit (Edmonton-WHL) in Inter-League Draft, June 1, 1953.
- Traded to Detroit by Springfield (AHL) for Hank Bassen, Dennis Olson and Bill McCreary, May 1, 1958.
- Traded to Toronto by Detroit (Hershey-AHL) for cash and the loan of Willie Marshall, December 23, 1958.
- Traded to Oakland by Toronto (Rochester-AHL) for Bryan Hextall Jr. and J.P. Parise, October 12, 1967.

The HHOF take on Gerry:

Gerry Ehman started his hockey career as a standout offensive forward for the Flin Flon Bombers of the SJHL in 1951-52. From there, he made the leap into the world of pro hockey where a long journeyman's path awaited him.

From 1952 to 1958, he slowly sharpened his trade in the service of such minor-league clubs as the Edmonton Flyers, the St. Louis Flyers, the Sherbrooke Saints, the Quebec Aces, the Vancouver Canucks, the Springfield Indians, and the Hershey Bears.

Between minor-league stops, Ehman picked up a few games with the Boston Bruins and the Detroit Red Wings with little indication that the sturdy winger was anything more than a spot player. Once an injured forward got back onto his skates, Ehman was bound for his familiar place in the minors.

But in 1958, Leafs' GM Punch Imlach acquired him and tossed him onto a line with Billy Harris and Frank Mahovlich. The trio clicked, giving Ehman his first steady taste of life at the top. During the playoffs of that year, he astounded everyone, including himself, by potting 13 points in 12 post-season games.

The following year, he put in another sound effort, but was shut out during the playoffs. Soon after the start of the 1960-61 campaign, he was sent down to the Rochester Americans of the AHL where he remained until the tail end of the 1963-64 season. Imlach brought him back up for the playoffs, a move that got Ehman's name etched on the Stanley Cup.

After the championship parade, however, he was returned to Rochester where he toiled until the NHL expanded in 1967. The fledgling Oakland Seals secured his rights with the hope that his veteran leadership would help stabilize their new and disparate lineup. And Ehman did just that. Known as "Dad" because of his senior years, he skated on a line with Ernie Hicke and Tommy Williams. The trio performed well with Ehman putting up four-straight seasons of solid numbers in a losing cause.

By the end of the 1970-71 campaign, however, the old winger had run his course. He retired to pursue a lengthy career as a scout for various NHL teams. 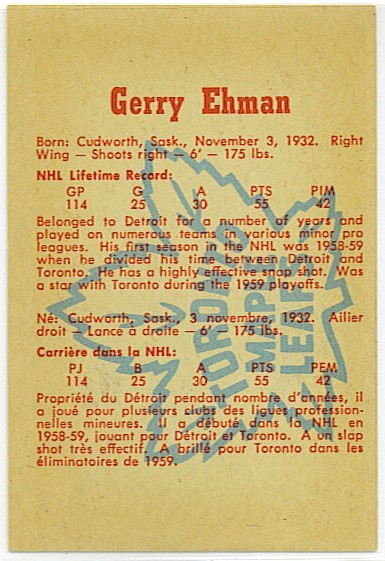