The Toronto Maple Leafs, faced with an 8 point deficit in the playoff race, turned to much maligned captain Dion Phaneuf for inspiration in the second intermission:

"Dion was talking in here, trying to get the boys fired up," said goalie James Reimer. "Mike Komisarek, all the veterans (followed), saying what we need to do. As a team we just kind of settled in here and took some time to realize what we each had to do out there to be better, and it worked."

I'm pretty sure the team benefitted from doing the complete opposite of what Komisarek said. The captain led by example with six hits including one that made Shaone 'Stupid Parents' Morrissand a plus 3 rating. Mikhail Grabovski picked up a powerplay goal and an assist on Clarke MacArthur's 20th goal of the year where he drove the net and ate a Tyler Myers crosscheck in order to set up a screen. Phil Kessel joined in the fun with a beautiful set up on Tyler Bozak's 11th of the year before scoring the game winner. Ho hum, just another big goal for the worst player ever. It came as a result of a great pass by Luke Schenn, a nice fake by Kessel on Jordan Leopold, and some help from Steve Montador. The absolute best part was that it came while the crowd was chanting Go Leafs Go.

Of course there was some luck but it sure sounds like whining when Lindy Ruff brings it up:

"They got lucky," Sabres coach Lindy Ruff said of the Leafs. "(The) puck went off the skate, sometimes you've got to live with that."

Right pal, the Sabres have never gotten lucky when they've beat the Leafs. Cry me a river and check your rearview mirror because the Leafs have now won two of the three games against the Sabres that were 'must wins'. They'll go for the third on March 29th.

I didn't get to watch the game because I was in the middle of getting eliminated from my own playoffs but I did get to listen to the last 10 minutes of the game. Joe Bowen was at his best as he fought to be heard over the roar of the ACC crowd. Yes, you read that correctly. The ACC crowd was rocking and the players noticed: 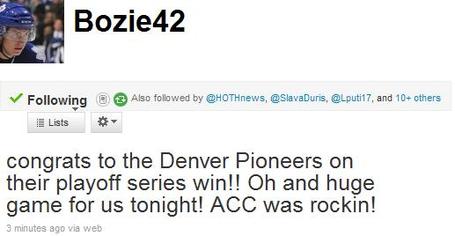 Funny what a little noise will do.  Here are another great images from last night's game: 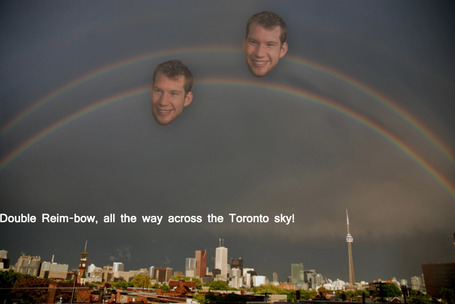 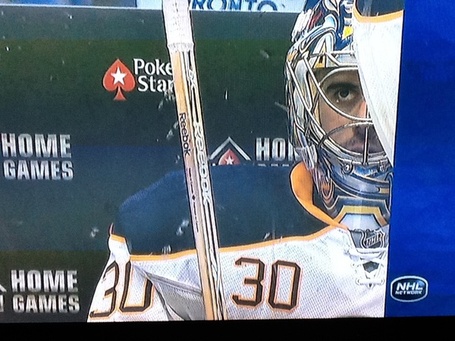