For some reason (just kidding, we all know why), last night Damien Cox was incredibly aggrieved at the thought that Leafs fans would show Tomas Kaberle some gratitude for his many years of excellent service if not for his willingness to waive his no trade clause. Apparently, the tribute video and cheers work against efforts to make the ACC an intimidating arena. That just shows that on the rare ocassions when he does attend games that perhaps he would be better served to pay attention rather than take dictation in Brian Burke's suite. Then, he had the audacity to complain because Leafs fans booed Tuukka Rask and Zdeno Chara! Imagine that, Leafs fans getting on the opposition to create a hostile atmosphere. How unseemly!

Of course, this prompted one of his classic "Toronto Maple Leafs Fans Are Too Stupid To Live" rants. The messages asking me if I'd seen this latest stupidity started to flood in. In response, I provided a simple piece of advice: Unfollow Damien Cox. It's the same advice that tthe nascent Barilkosphere gave Leafs fans as a way of dealing with Howard Berger's pecial breed of mental deficiency. @aggasC suggested the hashtag and the rest is history.

The idea of unfollowing Damien Cox struck such a chord that even as it trended in Toronto, Cox himself saw fit to comment:

Damien Cox, in short, is the epitome of all that is wrong with sports journalism. He holds the game in contempt, he sneers at its fans, he believes that he is the only truth teller in the business. The funny thing is that opposing fans have started to realise this. While he used to only troll Maple Leafs fans he has most notably expanded his roster to include Vancouver Canucks fans ("Mike Gillis sucks and your franchise is embarrassing"), Washington Capitals fans (he literally wrote a book on trolling Capitals fans), and Toronto Blue Jays fans ("You gotta ask the question and you're all so dumb that you can't understand that I wasn't insinuating that Jose Bautista uses steroids"). Even when you think that he's supporting the Leafs, as when he defends the Kessel trade, he's just looking to troll Boston Bruins fans. And carrying the water for Brian Burke.

There is a certain irony in Cox suggesting that the alternative to his coverage of the Leafs represents 'pablum'. I'd gladly take the pablum of Bruce Arthur, James Mirtle, Eric Duhatschek, Stephen Brunt, and others before subjecting myself to the misplaced haughtiness of Canada's # 1 tennis fan. That's before you get into the bloggers that cover the Leafs and the NHL better than he could ever hope to do. He's constrained not just by word limits but by his own imagination, his lack of desire to provide readers with valuable information, and by his relationship with Brian Burke.

As for the 'campaign' that began as a lark during the second period of last night's game? Well, when the hashtag first made an appearance, Damien stood at 14,793 followers. As of 4:51am: 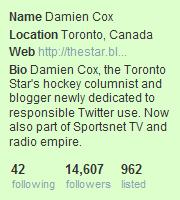 That's newly 179 liberated souls that no longer have to deal with Cox's special brand of asinine 'fan interaction'. As an aside, the 'blogger newly dedicated to responsible Twitter use' is a result of the timeout that he took after The Star's legal team read him the riot act for questioning Tyler Dellow's legal ethics when he broke the real story around the Colin Campbell e-mails. But I digress. Whether it's because the passage of time has jaded him or that he can't be bothered to approach his writing with any sort of intellectual honesty and respect for his readers, he's not worth the aggravation. Check out the hashtag on Twitter to see just how much better off you'll be after you cut him out of your life. In short: Unfollow Damien Cox.