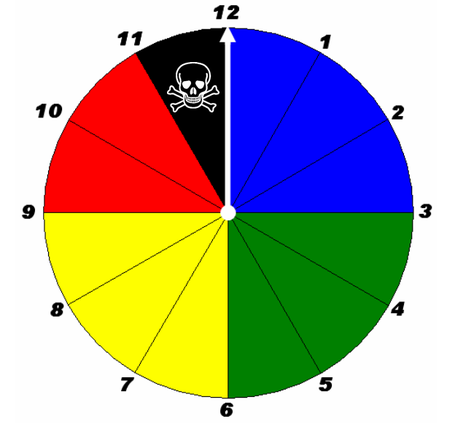 (Editor's Note: We'll be updating this for the rest of the season until the Leafs are mathematically eliminated from the Playoffs or squeak in as the 8th seed in the East.)

The Toronto Maple Leafs Playoff Death Clock currently shows the time as High Noon. Showdown time. The Leafs currently sit in 10th place in the East with 78 points and 7 games left in their season. Past that lies the postseason and the team standing in the Leafs' way is the Buffalo Sabres. Currently holding on to that 8th place spot with 81 posts and 9 games remaining, the Sabres have the upper hand on our beloved Buds. Between the two teams, 15 games will be played, including a crucial match between the two on March 29th, before the dust settles and the Playoff picture develops, and the magic number for those games is 12.

If through a combination of Leafs points lost and Sabres points won the clock reaches 12-midnight, then it will signal the end of the Leafs' Playoffs hopes. Tonight the Sabres take on the Florida Panthers. If Tomas Vokoun wants Brian Burke to throw millions of dollars at him this free agency, tonight would be the perfect opportunity for him to prove his worth.