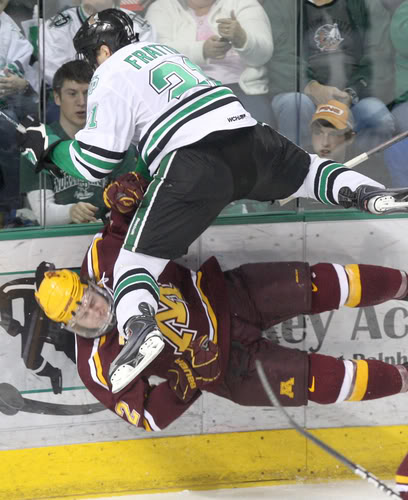 Editor's Note: Happiergilmore takes a look at Matt Frattin's career at the University of North Dakota.

This is my first fanpost, I hope you enjoy. No pun intended on the article title.

He was drafted in the 4th round, 99th overall by JFJ. He was suspended from the University of North Dakota hockey team prior to his junior season for a pair of off-ice, alcohol related incidents. He re-enrolled at the school and walked back onto the team, becoming a key fixture with the team. He led the NCAA in goals this year and finished 2nd in points. He wore the 'A' for UND this year, leading them to the WCHA regular season and tournament titles. The far-and-away favourite for the Hobey Baker award is now busy trying to take UND to an NCAA championship.

Frattin on why he came back to UND:

I had to come back and prove to the school, the fans and to my teammates and coaches, why I picked North Dakota.

He took the hard and difficult path and a real honest path and decided to work his way back to our program. Not a lot of people are able to do that. A lot of people will turn the other way and go away from the problem.

Standing at 6'1 and weighing 206 lbs, Matt Frattin is strong, fast and excellent with and without the puck. A hard worker on and off the ice, he has shown he can score goals, especially in big moments, set up teammates and play a physical game as well. Frattin has shown to be more of a goal scorer, with a powerful snapshot he likes to use from anywhere on the ice. He has shown good progression in stats from year to year and he has also been relied on more each year as a player and a leader.

The Bold numbers show where Frattin led the team in that category.

His NCAA success cannot be ignored, but when thought out rationally, there is as good a chance Frattin never comes to fruition in the NHL as there is one of him sticking. He has the size, speed and skill but there have been better players before him who never had NHL success.

From here there are a few roads he could potentially go down. He may wind up as an NHL 2nd/3rd liner or an AHL standout, or he may never be able to translate to the North American pro game and wind up in Europe. These are career paths that have been travelled by many.

Kevin Porter (glovetap to BCapp for finding me him), 5'11 195 lbs, had a very successful NCAA career with Michigan with a fairly similar senior season to Frattin. He scored 33 goals and 30 assists for 63 points in 43 games. He was named to the CCHA First All-Star team once and the Second Team once. He was CCHA Player of the Year in 2007-2008, and NCAA West First Team All-American as well as winning the Hobey Baker.

Porter was drafted around the same spot as Frattin, 119th overall in the 4th round of the 2004 draft by Phoenix. He currently is a member of the Colorado Avalanche. He has 22 pts in 66 games and plays a mainly 3rd line role. Before finally sticking this season, he played in the AHL mainly, with two stints in the NHL, one lasting 4 and one lasting 34 games. Porter's numbers suggest he may never be more than a role player.

Colin Murphy, 6'0 195 lbs, also had a successful NCAA career. Murphy, a LW for Michigan Tech, posted 11 goals and 42 assists for 53 points in 37 games his senior season. While not as much of a goal scorer, his PPG in his senior season was still around the same marker as Frattin's. Murphy was selected to the 2004-05 All-WCHA First Team and the NCAA West All-American Second Team.

Murphy was never drafted however, signing with the Toronto Maple Leafs organization after his senior season. After having a mediocre AHL career with the St. John's Maple Leafs/Toronto Marlies for 4 years, he was signed as a UFA by the Sabres, playing for the AHL affiliate in Portland. After an unsuccessful season there, he went unsigned by any NHL teams and is now a PPG player in the DEL (German league) for Augsburger.

Frattin still has not signed with the Leafs (he will be able to sign a contract once UND's tournament is over) however many are excited for him. In a hockey market such as Toronto, especially one that has been craving for a system loaded with prospect talent, having a player like Frattin that is putting up big numbers, winning awards, kicking asses and taking names, will get fans excited. But I hope I have shown you that his success at the NCAA level will likely not translate to being a 55+ point NHL player.

Do you think he will eventually find his way into the NHL? Where does he top out as a pro? Discuss below.

Thanks for reading, Go Leafs Go.