Guide To The Playoffs: Nashville Predators

Share All sharing options for: Guide To The Playoffs: Nashville Predators

The Case Against Nashville

Where to start? David Poile dared to turn down the Toronto GM job. Is he afraid of the Vatican? The Predators are in a Southern market that loses money while failing to achieve Gary Bettman's long held delusion of a national television contract. Toronto has to PAY Nashville money which they then use to make a team that has been more successful under the new CBA that was made partly at their behest to handcuff the Toronto Maple Leafs. Hell, when they traded for Mike Fisher the local headline was more focused on Carrie Underwood! To be fair, she is good looking.

The Case For Nashville

One of their best young defencemen is young, Canadian, shot a puck through the net during the Olympics, and has a smile that lights up the room. The other is the nephew of one of America's greatest villains. They are the current victims of a smear campaign by the Vancouver media which makes us kindred spirits. And their GM's patience and track record should be lauded.

"For those of you who hope that Toronto can swoop in and buy up some of the quality players on the Preds via free agency, a deep playoff run will certainly escalate those players' salary demands, and potentially make them too pricey for Nashville (forget about Shea Weber, though). As if that wasn't enough, just think about that incredibly annoying "Friday" song for a moment; OK, now that it's stuck in your head, you should know that Rebecca Black... she's from Anaheim."

- Dirk Hoag, On The Forecheck 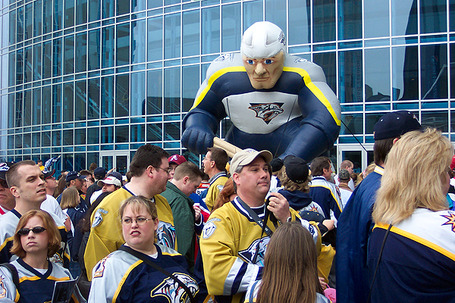