Share All sharing options for: Guide to the Playoffs: Detroit Red Wings

You know the saying: "these ain't your daddy's..."? Well, the Detroit Red Wings actually are your dad's Detroit Red Wings. I remember watching Mike Modano in the Stanley Cup Finals against the Pittsburgh Penguins in 1991. I was 5. HE IS STILL PLAYING. But hey, who says veteran laden teams can't be Cup contenders? The 1967 Toronto Maple Leafs certainly were. If you're still looking for a team to throw your support behind this spring, continue reading below to see if the Motor City is worthy of your fandom.

The Case Against Detroit

They've been at the top for nearly two decades and christ their fans are smug about it. Any fan base that prides itself on an innate ability to smuggle dead sea creatures into opposing rinks is questionable. The Wings stole Cujo from Toronto in 2002 and will never be forgiven. But mostly, teams that enjoy long term success after decades of futility often live to see themselves become the enemy (see also: Boston Red Sox, soon the Chicago Blackhawks). Unless your team is the one at the top, nobody wants to see the same group reign forever. It's time the Wings sank into the abyss like the rest of Detroit.

The Case For Detroit

Detroit is the most successful franchise of the past twenty years. They won four Cups between 1997 and 2008 and haven't missed the playoffs since 1990. Ken Holland is a sure-fire Hall of Famer in the builder category and they're led by Nicklas Lidstrom, one of the top defensemen of all time. Beyond that, they play a near perfect brand of hockey. Every member of the team can skate, they move the puck well, they're dogged forcheckers, and their forwards display both determination and ingenuity. The Wings are poetry out on the ice. They're also the best bet among any of the Western Conference teams to knock out the Vancouver Canucks. That's enough reason for me.

Just a heads up, but I've been telling Leaf fans for years why they should cheer for the Wings. The thing about me is that I grew up in Toronto, and have a unique understanding of Leaf fans. I know your passion and your loyalty for the Leafs run deep. It's something you're born with, and I just never had that connection. So I turned elsewhere, and my choice to back the Wings (made in 1988) [Editor's Note: Not bloody likely] has paid off immensely. Why should you cheer for the Wings in the playoffs? Because you deserve to back a winner. Leaf fans, like Cub fans, have a reputation that you will support your team no matter what. That's very admirable, but isn't it about time that loyalty was rewarded? I know the future of the Leafs is bright, but we don't live in the future, we live in the here and now. Forget all the talk about "underdogs" and "Cinderella" teams; last time I checked, Cinderella only gets the Prince in the movies, not in real life.

The Leafs and Wings are not so different, you see. They are both Original 6 franchises with storied pasts that have hit rough patches at one point or another. But we're also part of the "big boys" club: mere playoff appearances are not enough. We crave the Cup. Join us in our quest to add another Stanley Cup to our trophy case (and would still leave us 1 shy of you overall), marvel at Nicklas Lidstrom, one of the greatest defenseman to ever put on skates as he embarks on what could be his final playoff run. Be amazed at Pavel Datysuk's dangles every night as he constantly does things with the puck that you never thought possible. I said it earlier, but you Leaf fans deserve the best from your hockey team; who is better than the Wings? Besides, it's very likely the Wings are going to make the Western Conference Finals, and I know you're not going to cheer for Vancouver. Get on the bandwagon early; we've got more than enough room.

- Amerinadian, Winging It In Motown 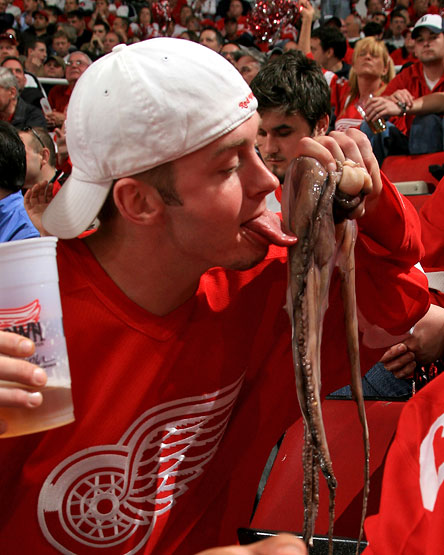 This is probably the safest thing to lick in Detroit