Guide To The Playoffs: Washington Capitals

Share All sharing options for: Guide To The Playoffs: Washington Capitals

The Case Against Washington

Washington may not have initially tanked on purpose but once they saw the light (ie Jaromir Jagr gave up on Washington like so many Americans before and after him) they pursued the tank with reckless abandon. Ted Leonsis may pretend that it was always his plan to race to the bottom but Alex Ovechkin was no more than luck. He may be beloved by Caps fans but he can be a pretty big whiner. They can't even keep Pittsburgh fans out of their own barn. They just re-signed one of the worst fighters of all-time and let's not forget that they revere Public Enemy Number One in Canada.

Most importantly, Jason Chimera yelled at us like a big bully.

The Case For Washington

Historically, the Leafs don't have a beef with Washington. It was close run too last week but luckily for our relationship wasn't harmed as the Sabres won before the Capitals were able to dent our perfect record of zero conflict. Capitals fans have even made us our own logo. The main reason the Capitals are worth supporting: Alex Ovechkin. Bruce Boudreau used to be a Leaf and he always has nice things to say about the team and he chirped the ridiculous Canadiens protest after the Pacioretty hit. Plus, he really loves chicken wings. And how could I forget that Ted Leonsis hates Damien Cox.

"Look, we know…the Caps broke your hearts last year when they choked away a 3-1 series lead to those hated Habs. It was painful. It stung. Dare we say that many of you may have taken it even harder than Caps fans. But this is a year of redemption, a year of making wrongs into rights. That heartbreaking loss to the Habs has put a chip the size of Hal Gill on the shoulders of each and every Cap, something which should put fear into every Ranger’s soul and joy into the hearts of all that follow the Caps – and that should include you!

And hey, if you need another reason to choose the Caps over the Rangers, I leave you with two words: Sean. Avery." 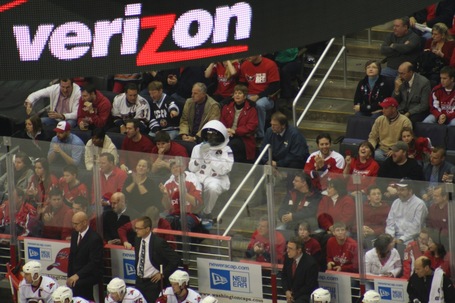 I've landed on a strange planet where Washington finally cares about hockey. Wonder why?