Guide to the Playoffs: Montreal Canadiens

Share All sharing options for: Guide to the Playoffs: Montreal Canadiens

You know that feeling you get when you're about to vomit? Your mouth starts to salivate and your stomach turns to knots? That's pretty much how I feel whenever I think about Les Canadiens de Montréal. I wouldn't call them a Mickey Mouse organization, but they did draft Louis Leblanc in the first round in 2009. If you're this far down on the list of teams to root for, you're probably just indecisive. But we'll make a go of it anyways.

The Case Against Montreal

I shouldn't even need to explain this, but here we go... 1) Public safety: less bandwagon Habs fans makes for fewer rioters after every win (or loss...really any occasion). Montreal is Toronto's insecure little brother to the east. We have to look out for them. 2) Because every person in one of those Toronto Star or Nat Post articles about Leaf fans jumping on the Habs train last year was a douche. Don't be a douche. 3) Because no Habs fan would ever, ever, ever root for the Leafs if their roles were reversed (see: 2011-2012 playoffs). 4) Because Habs stank never washes off. 5) Because you have self-respect.

The Case For Montreal

Not applicable. In fact, if we find out you are cheering for Montreal, we will ban you. Although beating Boston in round one before being swept in round two would give the Leafs a better draft pick.

One major reason Leafs fans should hop on the Habs bandwagon is national pride.

A second reason is to support the GTA kids. Both Mike Cammalleri and P.K. Subban are from the Toronto area, so Leafs should support the hometown boys.

Yes you follow the lead of Don Cherry and get on Subban's case, but you all know if he was in Blue and White, you would be cheering him on.

- Kevin, Habs Eyes On The Prize

A noble effort but Cammalleri is a traitor. Let's try another one:

There is no good reason for Leafs fans to cheer for the Habs. Unless you need to get laid. 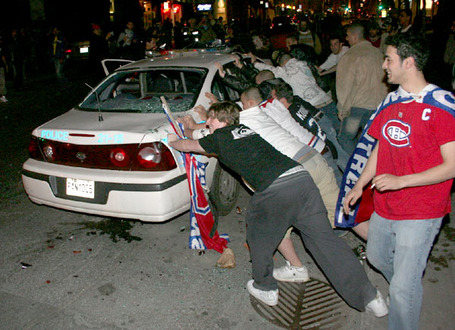