Share All sharing options for: Guide To The Playoffs: San Jose Sharks

The Case Against San Jose

I've never honestly felt any real dislike towards San Jose as a team. It's hard to hate on a team that the Leafs play so infrequently, and who fall short in the playoffs so often. Moments like the Dan Boyle own-goal seem to crystallize something tragic (and yet also really quite hilarious) about the team. If you're going to cheer against the Sharks, it's for one or more of the following three reasons: one, you're the kind of person who laughs when people fall down (so, most of us), two, you're the kind of person who laughs when Kyle Wellwood falls down (again, most of us), and three, you're the kind of person who wouldn't brake for Dany Heatley in the street (hm, maybe all of us). Come to think of it, cheering against this team could be a gas. Oh, and they have Jamal Mayers.

The Case For San Jose

The Sharks haven't finished outside of the top five in the regular season standings since the 2005-06 season. With this many proverbial kicks at the playoff can, you'd think they'd have had a sniff of the finals by now. My inclination is not to characterize them as a bunch of "chokers", but rather a team that has suffered from bad puck luck in the small sample size that is the Stanley Cup Playoffs. Antti Niemi has put together a good season, the team is relatively healthy, with Ryan Clowe likely to return for Game 1, and they have Ian White. I'd be happy to see this team win.

Futility is the name of the game in Toronto.

You guys have dealt with disappointing regular season teams for so long that the postseason has become a foreign land, filled with magical creatures your postseason-starved minds can only imagine (those unicorns and fields of puppies you have always wondered about? Yes, they do exist). For 82 games a year you've grown used to that feeling of inferiority, reveled in it, made it your own. Webster's defined the word. It has now defined you.

Which makes the San Jose Sharks an easy selection for your 2011 Playoff Team. There's no sense in changing your stripes just because April has come, no sense in hanging your hat on a perennial powerhouse like Detroit. To choose the Sharks is to choose the Leafs-- a team we love, filled with charismatic and exciting talent, but also a team you can never count on when the chips are down. For 82 games you've witnessed the Leafs build and subsequently destroy your hopes and dreams. During the 2011 playoffs, history shows us that the Sharks will provide that warm and fuzzy blankie for you as well. It's a comfort thing. It's Psychology 101.

We've all complained about Ron Wilson's defensive schemes, his ornery ways, his piss and vinegar approach to coaching teams. We've all envied Ian White's ability to grow a rocking mustache. We've all coveted signing Patrick Marleau, cursed Jean-Sebastian Giguere (for entirely different reasons of course), and sat in amazement as Dion Phaneuf made an ill-advised pinch.

But most of all we've all been tossed about in the brutal wave of hopelessness. And that makes the San Jose Sharks the perfect team for Leafs fans to root for this year.

Plus, it gives you a reason to stay up past your bedtime for a round or two. Which is always nice. 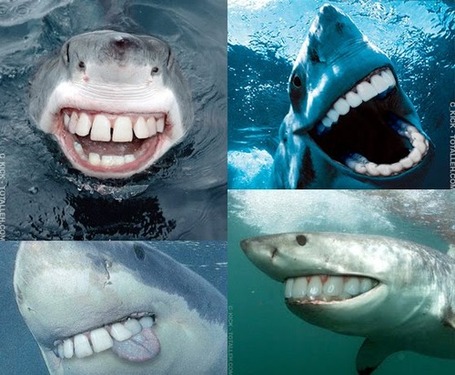 Look at that thing's teeth.