Guide to the Playoffs: Buffalo Sabres

Share All sharing options for: Guide to the Playoffs: Buffalo Sabres

The Case Against Buffalo

You should despise everything about the Sabres and the city from which they come. On the blueline they have Tyler "Leafs Should've Picked Me Instead of Luke Schenn" Myers. Up front they have former Leafs draft pick Brad Boyes who was trade bait for Owen "I Didn't Do Shit" Nolan. Due to somehow falling ass-backwards into 2 of the best goalies of the last 20 years, people think Lindy Ruff is a great coach and should take over the Leafs bench. Every time I drive through Buffalo on my way to Toronto I get to play "What's that smell?" in the car with Chemmy. In February, downtown Buffalo smelled like cat food. Last March, it was old gym socks. Buffalo fans are the epitome of angry bandwagoners; 95% of them live in the Golden Horseshoe and will jump ship the second the Leafs get good again. But should the Leafs falter, up to the attic they'll go for the Buffalo Sabres paraphernalia stored next to the Christmas decorations.

The Case For Buffalo

One good thing that could come from Buffalo going deep into the playoffs, would be that it might finally illuminate the burnt out light bulb in Brian Burke's head that informs him that quality goaltending is the most important aspect to icing a competitive team. Another would be seeing a team playing well for a vocal, supportive owner. Terry Pegula is the type of person the NHL should be scouting for to buy its struggling teams, or at least the ones on the market for $1.3B. Does Terry have a brother that's a Leafs fan?

So wait, I'm being asked to try and convert Leafs fans into Sabres bandwagon jumpers? Something doesn't seem right here. Anyways, the Buffalo Sabres are a team that Leafs fans should know well. They are a team that most Leafs generally dislike, probably not with the same vitriol as Ottawa and Montreal. But, if you can look past that at least we have a team that should keep you entertained for two weeks and hopefully two months.

- Zach at Die By The Blade 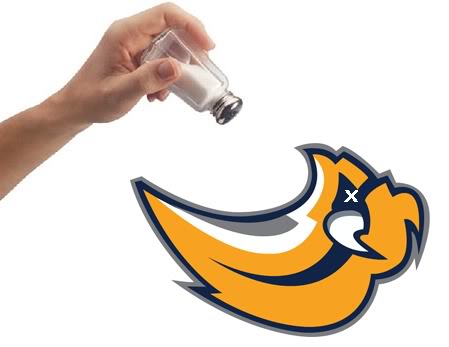