Guide To The Playoffs: Pittsburgh Penguins

Share All sharing options for: Guide To The Playoffs: Pittsburgh Penguins

The Case Against Pittsburgh:

I'm sorry, FLYERROB, but I just don't hate Sidney Crosby. Nor do I hate Evgeni Malkin. But as candidates for "Worst Sentient Being" go, Matt Cooke is a strong one. Wishing upon him a slow, and withering death is something that I can get behind at least half seriously. Of course, he won't be dressing for the first round, but that doesn't mean there isn't any hate leakage.

The Case For Pittsburgh:

Although the Penguins have been without Sidney Crosby and Evgeni Malkin for half the season, the team is still 12th overall in goals for, and has been relatively hot, going 8-2-0 in their last ten games. If they win a round or two without Crosby and Malkin (though there's rumored to be an outside chance Crosby comes back) I know they'll be feeling like we did when Sundin was injured in 2002. (Well, not really like we did, but that's what I'll be thinking about.) James Neal has been suffering from bad luck, with a 1.92 shooting percentage in his 20 games with the Penguins, and so I'm inclined to think that he's going to break out soon. Last, but not least, Pensburgh is a lot of fun. I spent some time there last season during the playoffs (although then I was known to them as 'Fleet Fox'), and would recommend stopping by. Good bunch.

Currently we don't have any superstar players, Kris Letang is playing like he is on a coke binge, Alexei Kovalev is our number one winger, and if James Neal was on trial the jury would be hung.

Also, Tyler Kennedy is an RFA next year, he is probably from Toronto or something.

If you look it up too, Guy Boucher probably ripped up a Wendel Clark card at some point. Just saying.

Pens in the playoffs. We need you. 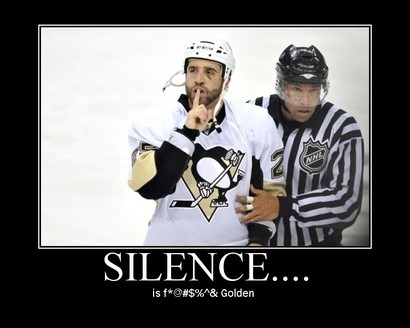 Editor's Note: This is for the gents...probably NSFW.