Guide to the Playoffs: Boston Bruins

Share All sharing options for: Guide to the Playoffs: Boston Bruins

The Case Against Boston

[Deep Breath] Because the sooner they're eliminated from the Playoffs, the better the draft pick they traded us for Kaberle. Because post-trade they've labeled the lovable Phil Kessel as a problem in the locker room and take every opportunity to talk about how much better off they are without him. Because their team caveman Nathan Horton has run afoul of our team caveman Dion Phaneuf. Because a first round exit minimizes the amount of Jack Edwards homerism we're exposed to while watching the games. Because fuck you Milan Lucic. Because it'll finally make Peter Chiarelli get off the phone. Because our pick swap may end up only 6 to 7 picks apart for a 30+ goal scorer. Because maybe people will finally see that the Bruins are a terrible defensive team kept only afloat by good goaltending. Because fuck you Colin Campbell and fuck your crotch fruit. Because Tuukka Rask needs more time to negotiate a trade from out behind the shadow of Tim Thomas. Because Nazem Kadri thinks their goaltending is comical.

The Case For Boston

Because fuck you Montreal! I hope Zdeno Chara breaks the neck of every flaming cop car in your worthless city and that Tomas Kaberle then puts out the fires by pissing on them from the top of the Bell Centre. But then I want them to lose horrible to Philly........again. Also your bear commercials are pretty cool.

See!
Carey Price crumble under pressure!
See!
Tomas Kaberle do his thing against the Habs!
See!
Tyler Seguin and Tuukka Rask...sit on the bench!
Hear!
Jack Edwards capture the spirit of the thing!

The Bruins may not have the most likable players in the world (I believe the villain list is up to Zdeno Chara, Milan Lucic, Nathan Horton, Brad Marchand, Tyler Seguin?, and Gregory Campbell via his dad) but just think about how great it is to see those villains really put Montreal into the...uh, offseason. Another reason to root for Boston: Leafs drafting. In the Kaberle trade, there's a condition where the Bruins getting to the finals gives the Leafs the 2012 second-round Boston pick. Every journey begins with a single step, and that first step is so much more satisfying when it's on Carey Price's neck. Finally, you should root for Boston because I saved y'all seats on the bandwagon!

Do you really need a reason to root against the Habs? 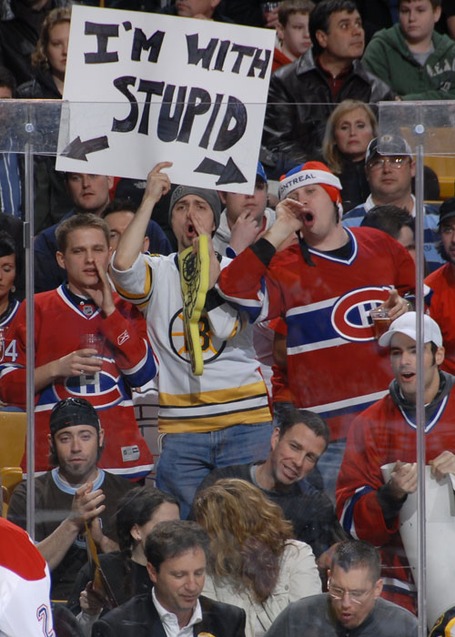