Share All sharing options for: Guide To The Playoffs: Tampa Bay Lightning

The Case Against Tampa Bay

Seen Stamkos? Not for a while because the Lightning were owned by a couple of joke owners (one of which is allegedly a con artist!) that proceeded to hire former ESPN clown Barry Melrose who had no clue what he was doing anymore. Also, let let Dan Ellis share his douchiness on Twitter (isn't it all that? har har har). Last but not least, Viktor Hedman knocked Sidney Crosby out of hockey for the past 4 months.

The Case For Tampa Bay

Fake Dan Ellis is pretty damn funny. Tampa Bay had been one of the success stories among southern markets before the team fell off of a cliff. Vinny Lecavalier is pretty likable in that he displays no desire to return to Montreal. Same for Martin St. Louis and his great story of success. Their Stanley Cup in 2004 saved Leafs fans from having to deal with smug Flames fans. Instead we can just laugh at them for giving us Dion Phaneur and Keith Aulie for whatever Burke had in his pocket that morning. Steve Yzerman's also a pretty nice guy. Plus, they sold us that 4th round pick to pay for the Jonas Frogren Debacle.

We’re ripping off the Leafs colors and uniform look next season, isn’t that enough? OK, want more? How about southern Ontario boy, and this summer’s "to-the-Leafs-via-offer-sheet" rumor subject, Steven Stamkos? You can get behind him, right? No? Ok… Uh… Ok! I got it! I got it! Do it for 1967 – rediscovered off Clearwater in the Tampa Bay Area! That’s got to do it!

You want HOCKEY reasons? Specifically the Lightning and why you should follow them? Well, crap, they’re in the playoffs and an exciting team to watch. No over-saturated stars, and a rags-to-riches success story in the standings. It’s feel good! It’s hip! It’s now! It’s wow! It’s the #5 seed in the East! Join us, won’t you? 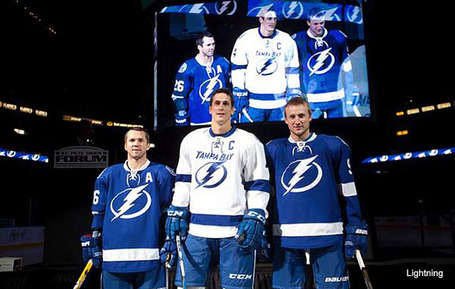