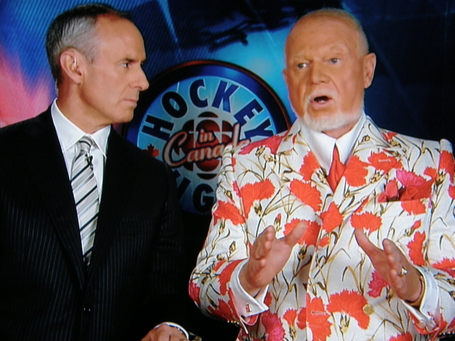 I recently had the opportunity to act as PPP's envoy to the unveiling of Hockey Night Pulse, a new social web application from the CBC and Microsoft Canada. Pulse tracks tweets with team-related hashtags, and displays a real-time (within about two minutes) log of how much discussion games generate at any given moment in the form of a "volume" bar for each team. Users can then mouse-over the volume bars to see samples of those tweets. They describe it as a "social second screen," but since you're all in the PPP Game Day Thread (right?), it's more of a third screen for you.

Full review after the jump.

What they got right: the approach

Microsoft came to CBC Sports with the idea of using the Stanley Cup Playoffs to promote Internet Explorer 9's support for modern web development standards. The HNIC team wanted to use the project to stay relevant with fans who increasingly rely on online sources. Instead of trying to create a needlessly centralized, second rate online gathering place in a weak attempt to shape and direct the online fan experience, they've decided to leverage fan popularity in existing social networks, and allow the same kind of bottom-up storytelling that makes the better SBN blogs such immersive communities. After all, as anyone who was around for trends like #KyleWellwoodIsSoFat (which trended before there were regional lists), #ThrowTheSnake, and #deadraccoonmoviequotes knows: when hockey fans sneeze, Twitter catches a cold. Pulse tries to tap that enthusiasm, instead of asking fans to move away from the service they've self-selected en masse.

Their technical approach is also refreshing. When I read the original invitation, which tied this to IE9, I took that to mean Pulse was a browser-specific development, and wondered if I had accidentally stumbled onto an email I forgot to open in 1997.* Fortunately, the presenter assured us, Pulse is done top to bottom in standards-compliant HTML5 and CSS3, so you can use it as intended in any modern browser. I don't want to bog this review down in tech, but this was very positively surprising for a project initially (sort of) prompted by Microsoft. And as much as they didn't want to say "iPad," you can run it on your iPad while the game is on your TV.


What they got wrong: fortunately, mostly little stuff

There are some layout clunkiness issues (updates at the bottom instead of the top means scrolling through old games to find current information), and they rushed it out before implementing some of what should be Pulse's best features (more on that in a moment). Those are correctable hiccups but there are, unfortunately, a couple of by-design failures too.

The Pulse team is developing richer media integration as we speak, tying a Getty Images plugin (similar to the AP photos functionality you can use on some PPP articles) to the "high volume" tweet moments in the game, so you can literally see what all the fuss is about when discussion explodes, but the presenter dismissed the idea of similarly pulling images from TwitPic, Plixi, and the like, citing concerns about quality guarantees. While these concerns may be valid, I don't really see how they apply only to images, when the main thrust of the project is consolidating content from the wild, wild web. The exclusion seems to betray Pulse's otherwise strong commitment to reacting to the choices of the crowd.

Another feature allegedly to come is the integration of the existing HNIC website's live chats, which they assured us are very popular. I don't doubt that's true, but in an application otherwise driven by broad overview, this strikes me as something that will just distract and take up space. This struck me as a sort of equivalent to in-depth play-by-play on Twitter: a thing which will get in the way when you're trying to use the service for what it's good at.


The best is yet to come

To me, the most intriguing aspect of Pulse is one expected to be rolled out by the second round, which they've dubbed "the data layer." Acknowledging sports fans' love affair with statistical analysis, the self-described "stat nerd" heading up the project described a system in which the user is shown not just what fans are saying, but also how the events they describe affect statistical analyses of the game, series, and playoffs. For example, when former Golden Horseshoe Hockey League superstar Nathan Horton scores, you get his updated totals, in addition to my tweet pointing out where he played Junior B, and that all the handsome geniuses who took him in Rinkotology are getting paid. Depending on how far the Pulse team is willing to wade out into the world of hockey stats, the data layer could be very, very interesting.

There are also plans for a similar media layer, including the Getty integration I mentioned above. While I was a bit hard on what the Getty plugin isn't, I still think what it is is well worth having. If they extend this to include clips from CBC's own game footage, Pulse could become a primary goto for replays. One who had to miss the game could theoretically use the tweet volume bars to find where the highlights are, and watch them that way. I didn't get a specific answer for when the media layer will be rolled out, but they are expecting it during this year's playoffs.

There were also some fanciful and impressive ideas being thrown around about user customization and better Twitter integration (which hashtags do you want to monitor, choose which users' tweets to pull, follow and fav directly from Pulse, etc). No specific timeline was given on these, but they weren't included in the answer when I asked what they foresaw for this year's playoffs.

Overall, Pulse is a good start, with a lot of potential. At present, it's a neat way to engage Twitter's huge piles of hockey content as a game unfolds, without having to do the legwork of finding it yourself, or clog up your own timeline with people and lists you wouldn't otherwise follow. The expected developments should push it far, far beyond that, though, and HNIC seems to have the right outlook to grow this into a very useful product. Its appeal is probably limited to somewhat obsessive fans, but, well, if that doesn't apply to you, you're probably not reading PPP.

*This sentence best read in Mosaic.