So what if I'm noted as the pun guy. I'm not a one-trick pony. The one thing I love about this site is the humour. 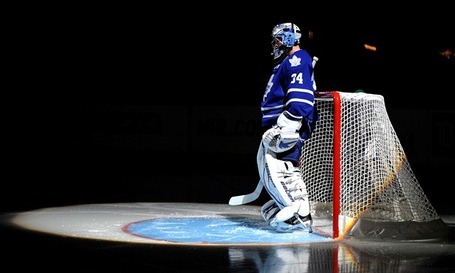 A lot of you people ( what do i mean 'you people'?) are freakin' funny, and very creative. I've found myself laughing at my screen many times since I started lurking here a few months ago. I guess it's probably why I decided to join. I mean as Leaf fans, you gotta have a sense of humour.

More to the point of this post, Thursday morning's FTB thread started of with the announcement of Ron Wilson's return next season, and included a little tribute to Eminem's Without Me. And of course reader participation commenced. I could only offer a brief stanza before heading off to work, but upon returning home, I have to admit I got a lot of laughs over everyone's work.

Anyway, that friggin' song has been running incessantly through my head since then, and so today I thought I would add further to my little contribution in an ode to James Reimer (and maybe excorcise that song from my skull). If you read further you'll come to see why we perhaps we shouldn't call him the statue...

Feel free to criticise, add on, demolish and generally contribute in any way you wish.

Luke Schenn smash anyone goin' 'round the outside,

Luke Schenn smash anyone goin' 'round the outside,

Adieu to the Monster, cause no one wants to see the other teams score.

But if you want Reimer, this is what I'll give ya. Good goaltending, no swearing, and no hard liquor.

Some saves that'll jump start your heart quicker than Jonas'. So he gets shocked at the hospital

by the doctor when he does another ablation.

To the complete disbelief of Leafs nation. (Hey!!!)

You waited this long, now stop debating, cause I'm back, I'm in the net and puck-saving.
Dion, could you stop your rock-banging, it makes reading my Bible complicating.
Now the ACC won't forget me. But let me be me. Oh, and Glenn Healy,
You tried to put me down on CBC, but you never were as good as me.
Don't mean to trip, "bout my 20-win clip.
I'm too humble for this; got a smile on my lips.
Gotta get ready, the cups gonna be heavy.
I just settled all my angles. THANK YOU FRANKIE!!!

The press tells us, fans feelin' rebellious.
Embarassed, playoff hopes deader than Elvis.
They start feelin like prisoners, helpless,
'til someone comes along on a mission and yells GEE WHIZ!!!
A missionary. Mission? Be better than Carey. Have another smoke, keep pollutin' your airways.
A rebel, so just let me revel and bask, in the fact that I got Don Cherry on my mask.
And it's a disaster, such a catastrophe. If the Habs get to play for le Coupe Stanley.
Well, I'm back na-na-na-na-na-na-na-na-na-na.
Fix your bent antenna, tune it in and than I'm gonna
enter in, turnin' the Leafs into a winner.
The centre of attention, back for next winter.
I'm interesting, always shot-contesting, witnessing, saying prayers and attesting.
Testing, attention please. My penance? Lebda plays defence for me.
No statues, please. That's idolatry.
Optimus! Who sent, you sent for me?

A-tisket A-tasket, I go tit for tat with anybody who's into Bible-bashing.
They'll get a tongue-lashing in Reimer fashion; some dangs, a few frigs and other bad things.
Don't know me? I'm the hottest thing since Ovi, not just another Francois Allaire goalie.
JS, sorry, you're too old let go it's over. Aren't you about due for a groin-pull?
Now lets go, just give me the signal. Say plan the parade, I don't listen to insults.
I been dope, Less sinful and simple.
Deckin' out my mask with Puckin's Optimus symbol.
Some forget it's about the hockey team. Everybody only wants to discuss me.
How I find my team-mates' language disgusting.
But it's just me, I'm not obscene.
I don't want a goalie controversy.
I'm the first one to post a .920, and carry my team so selflessly.
There's no sin in making myself wealthy.
(Hey!!!) there's a concept that works.
Twenty million dollar contracts might emerge.
But no matter how many goalies in the crease, it'll be so empty without me.