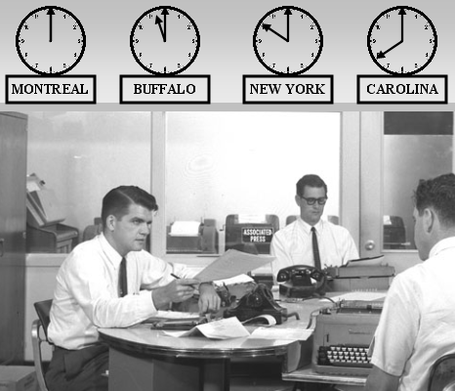 We're having a bit of a crisis here today at PPP Amalgamated Heavy Industries, Kitten Ranch, Pug Manufacturing, and Clock Watching Incorporated LLC. Fred, the squirrely looking fellow who we've assigned to clock watching duty, has informed us that the Montreal clock has struck midnight, and that the Buffalo and New York clocks are close to doing the same. This of course means that it's impossible for the Leafs to catch the Montreal Canadiens and take their playoff spot. But that also means we're not mathematically out of this thing yet!

Thanks, but no thanks, to the outcome of this weekend's games, the New York Rangers are able to also deny the Leafs their Playoff spot tonight should they earn a win against the Boston Bruins. For a full rundown of the different scenarios that could play out and end with the Leafs making the big dance, Chemmy wrote just the post for you over at Leafs Nation. None of them are very likely as Sports Club Stats is currently giving the Leafs a 0.3% chance to make it in. However, if there's one thing this Leafs team and Star Wars has taught me, when facing playoff elimination or an asteroid field, NEVER TELL ME THE ODDS!