Here at PPP Almagamated Heavy Industries Kitten Ranch Pug Manufacturing and Clock Watching Incorporated LLC, we have a set of rules for the betterment of all. My favorite rule, and our Noon Number, is Rule #5: Fact Checking. So I'm going to put Rule #5 to the test when it comes to this supposed curse of the Presidents' Trophy Curse.

Follow me after the jump to learn why the curse is a bunch of bull.

The Presidents' Trophy has been rewarded annually to the NHL team which finishes first in the regular season, and was established in the 1985-86 season with the first winner being the Edmonton Oilers. This inaugural year was also most likely the first time the Presidents' Trophy Curse was used by lazy sports reporters as the Montreal Canadiens went on to win the Cup. Here's where Rule #5 comes into play. The trophy has been awarded 24 times and 7 of those times that team has gone on to win the cup, a 29.17 success rate. PRESIDENTS' TROPHY WINNER MORE LIKELY TO LOSE CUP THAN WIN CUP! A CURSE ON BOTH YOUR HOUSES!!! That statement, without any additional context, is obviously true but it doesn't tell the whole story. If the Presidents' Trophy Winner didn't win the Cup, then who did?

Using the powers of the internet, I composed this spreadsheet which shows the Cup winners for every season going back to 1980, the first year for a 16 team playoffs. Let's have a look shall we? 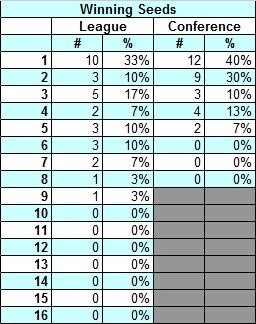 Our Noon Number makes another appearance here as no team seeded lower than 5th in their Conference has ever gone on to win the Stanley Cup. In fact, the last team to do so were the New Jersey Devils in the shortened 94-95 season. If the Playoffs are the big dance, then teams entering seeded 6th through 8th are definitely the wallflowers. They get in, but they don't get to slow dance with the cute girl from math class they have a crush on. 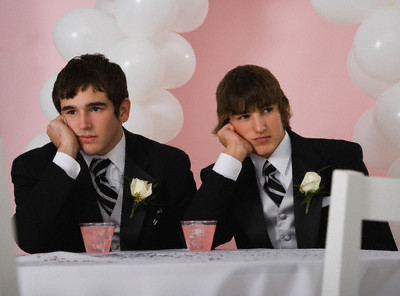 (The Sabres and Rangers pictured at the Enchantment Under the Sea Dance.)

But back to the supposed Presidents' Trophy Curse, if the odds of winning the Cup when you also win the Trophy are equal to the combined odds of the teams finishing 2nd through 4th, then there simply is no curse. History has shown, the best way to win the Cup is to finish 1st in the regular season. There is no curse, just a misunderstanding of the numbers by some of the dumber members of the MSM and the thoughtless sheep who follow them.

Rule #5. It exists for your protection and the protection of those around you.

Link to the full spreadsheet I created - Cup Winners by Seed