AAAAAAAAAND EXHALE. The seeming juggernaut of the Vancouver Canucks, who steamrolled their way to a President's Trophy before overcoming every challenge in the playoffs, was crushed under the righteous fury of the Boston Bruins. The Beantowners rallied after the vicious and filthy hit perpetrated on Nathan Horton to outscore the Canucks 21-4 on their way to winning four of the last five games and ending their 39 year old Stanley Cup drought. Over seven games the mentally strong Tim Thomas was miles better than Roberto "the choker" Luongo, the Bruins' shooters took better shots, and the team in gold and yellow wanted the Cup more. Or at least, that's what you might read. If someone were to dig deeper, I think you'd see among other things that Vancouver's shooting percentages (especially on the powerplay) came back to earth while the Bruins' picked the right time to take off. It will definitely be an interesting series to try to delve into the underlying stats although seven games is a pretty small sample.

Anyway, the great thing is that picture right there. Tomas Kaberle, after many years of loyal service to the Toronto Maple Leafs, manfully accepted a trade to Boston for the good of the Maple Leafs. The end result: the team picked up a number of useful assets and Kaberle finally won the ultimate prize. It is definitely bittersweet to see Kabby win it with another club but this is exactly what those of us that wanted him moved hoped for and thank god it happened because good lord could you imagine dealing with Canucks fans if they had won? They almost burned their city down when they lost! More on that after the jump but for now, more Kabby: 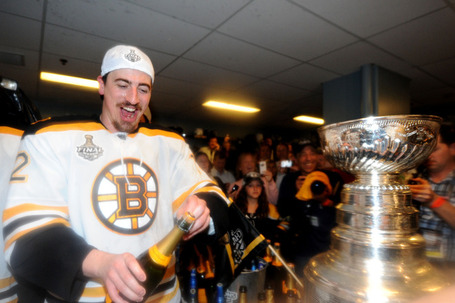 One of his former teammates was also really happy for the guy:

Good luck to kaba tonight! Hoping he gets that cup. #ItsAVestNotAWestKabb

As if that wasn't enough, some clown tried to rebut the thought by saying it didn't look like Kaberle wanted it (ludicrous):

Hes not? Hes leading their d men in points and is a plus 8 in the playoffs with only 16 mins a game! Hes playing great!

So tonight was a night to celebrate for Canada, Boston, and Kaberle fans. As for Canucks fans...well, things didn't go too well for them last night.

As a preamble to this part, I want to point out that I do know some great Canucks fans. They are the ones I follow and interact with on Twitter, Sean and Yankee Canuck and some of their crew over at Nucks Misconduct, and a good friend from university. So when I rag on Canucks fans, I hope they know I don't mean them but good lord are there a lot of their brethren that makes it so easy to hate their fanbase. From the yahoos that taunted Theo Fleury over his painful history of sexual abuse to the extensive and continual defence of Todd Bertuzzi to the ridiculous sense of entitlement they developed this year to the constant defence of their team's shameful antics to a recreation of June 14, 1994 there's no shortage of sticks with which to bludgeon Canucks fans. Which isn't to say that there aren't a lot of good Canucks fans or that they don't represent the vast majority but just as in every fanbase the loudest and dumbest dominate the narrative. Is that fair? No, but neither's life. This is the way sports works.

Which brings me to last night. So unless you went to bed before the game ended then you've probably seen some of these pictures already: 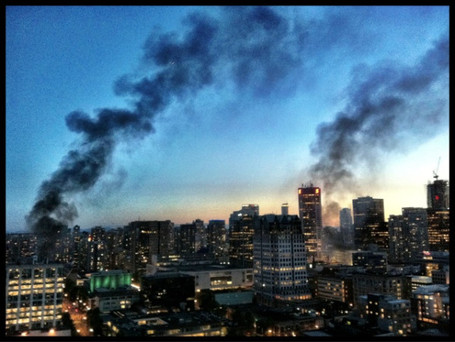 Fact: No Canucks fans are present in this picture 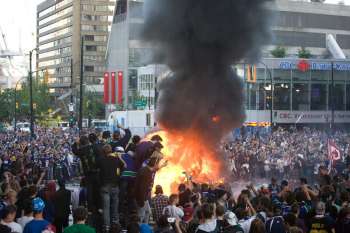 Uhhhh none here either 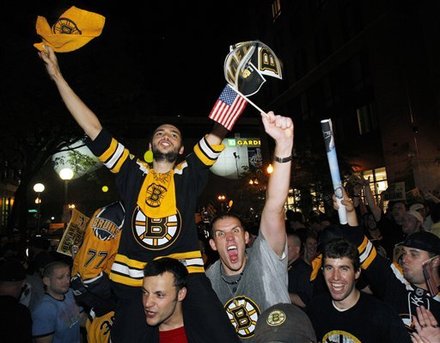 Look at these professional rioters 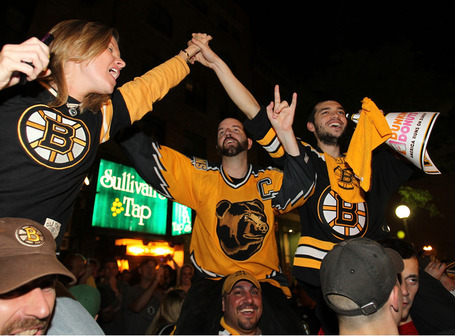 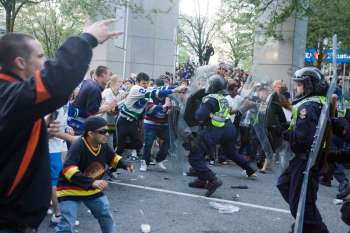 Pay no attention to the clothes worn here

Thanks to the excellent work of CTV and Rob Brown, who was trending worldwide on Twitter last night, it was pretty clear that the participants in the destruction and looting numbered much more than the 'small amount' of troublemakers that Vancouver's surprisingly handsome mayor Gregor Robertson suggested were behind the problems. The other truly mind-numbing suggestions were that these were not Canucks fans and that the police should start shooting people. Those two are brought to you by MENSA candidates Bruce Dowbiggin and Eric Francis respectively. And who could forget Dave Stubbs with the double helping of stupid by suggesting this was only the work of 'professional rioters' and that the 93 Montreal riots couldn't possibly have had any fan involvement because they started five miles from the arena. Didn't know the Habs only had 19,000 fans. On a personal note, as a soccer fan, it's great to watch a lot of the hockey media twist themselves into pretzels to deny any connection between the riots and the hockey game when they would be the first to label any trouble near a soccer field an outbreak of hooliganism.

Robertson and the cops were getting hammered over the outcome but to be honest, I'm not sure what could have been done better in order to balance keeping the peace and protecting first responders. Firefighters and EMTs were not able to get into the area because the crowd quickly got out of control. Fan viewings had been extremely successful in the city (and at the Olympics and worldwide during World Cups and Euros and on and on) and no indication had been given that losses during these were causing any issues. And to be frank, with the reported 100,000 that were downtown I am not sure what the cops could have done to get the necessary numbers. The plan worked in February 2010 because the Canadian Hockey Team did their part by winning.

And again, while it was a big contingent in terms of numbers, it was a small percentage of Canucks fans that were causing the damage and looting. There were a lot of fans trying to stop the looting and hopefully those that were snapping pictures and video will help the police identify as many perpetrators as possible and there's even a group of fans reportedly planning to go downtown tomorrow to clean up. Of course, there were a tonne of dummies running around and just joking around but as some guys said on TV, there was nowhere to go and a lot of confusion. There were a lot of fights and some reports of some deaths and some suspected homicides (totally unconfirmed at the time of writing) on what was all in all a surreal situation to see unfold on television and social media simultaneously.

Personally, I think that Toronto would burn if the Leafs made the final and the point was certainly made that any other Canadian city would have done it too. No mention of course was made of Calgary in 2004, Edmonton in 2006, Ottawa in 2007 and their lack of comparable riots. Then Leafer1984 found this picture of Little Italy in the aftermath of their win in 2006: 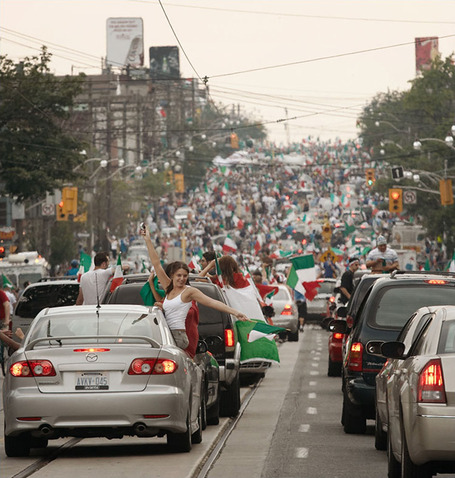 Wish this was after a loss...

Can't see any fights. And there's no situation that cannot be linked back to the Simpsons:

Tonight, the city weeps, as for the first time ever, a hockey arena becomes the scene for violence.

But enough about that. Let's get to the heart of the Frowny Face Ledger: SAD FACES! 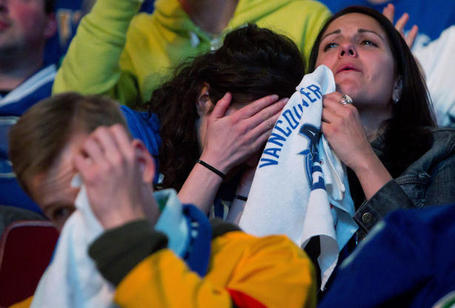 This lady is playing peekaboo with the Sedins 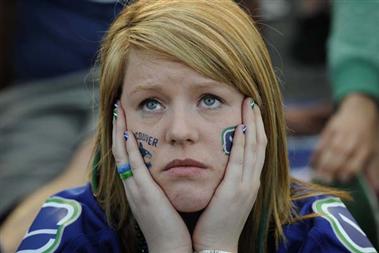 A sad ginger means you are safe 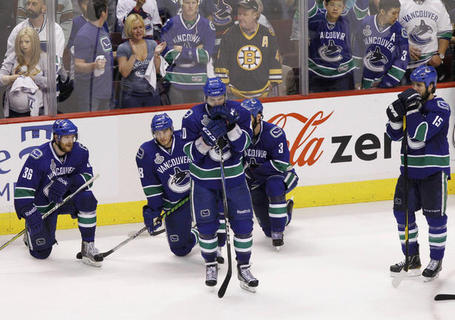 Dear Hockey Gods, THANKS FOR LISTENING! 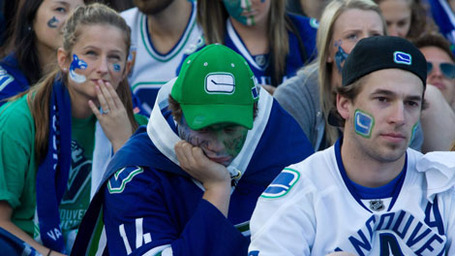 Dammit, now I have to buy a Bruins jersey 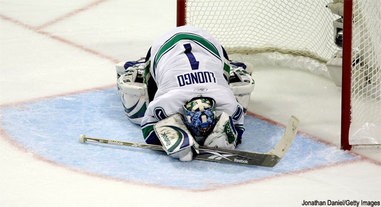 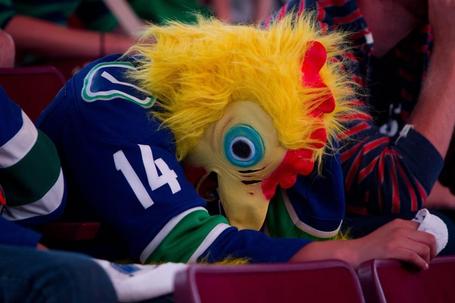 A Burrows jersey and a chicken head? That's so perfect that I almost can't believe that's not a Bruins fan.

That's it from me. Let's hear your thoughts on Kaberle, the riots, and your favourite sad Canucks pictures!