Cox Bloc Presents: A Riot of Their Own

Share All sharing options for: Cox Bloc Presents: A Riot of Their Own

KJ: Since you are quite the Twit, I assume you saw what McKenzie had to say in the wee hours of Thursday morning. Is this the first time a police force has cribbed their talking points from a sports analyst?

GT: I dunno, I think Toronto cops blamed visor-wearing Europeans and French-Canadians for the rise of squeegeeing in the 90s.

GT:  Seriously, the VPD asked people to believe that a group of anarchists:

1. Assembled from all over North America with a plan to start a riot, within two days - on Monday no one would have known there would be a Game 7. The Black Bloc people had 8 years to plan for the Olympics, an event that people protested for legitimate and obvious political reasons, and managed a riot that was about 1/20th the size of last night.

3. Started an anarchist riot for no stated political purpose.

Why is this the narrative? To slander activists whenever possible? To discredit the very idea (central to our freedoms) of demonstrating in our streets? To let the hockey fan - young male, affluent - we saw doing the overwhelming majority of the destruction off the hook? To cover up for the cops melting down faster than the Canucks in Game 6? My wife says that "anarchist" is just shorthand for "hooligan" in their eyes, but I don't agree. This is a deliberate scapegoating designed to take the heat off the real culprits and lay some convenient blame on left-wing activism

KJ: Agreed. Mostly. I actually wouldn't be surprised if the folks who torched that first car near the CBC building were in fact anarchist types trying to start some shit. But that doesn't explain what followed - when thousands of dicks decked out from head to toe in Canucks gear started flipping cars, smashing windows, and beating the shit out of people. Anarchist protestors tend to hide their identity. I've also never known an organized anarchist group (wait...that doesn't make any sense) to brag about their exploits on their personal Facebook pages.

Also, it isn't as if the violence started after the game. What about the Bruins fan who was punched and spit on in the Fan Zone during the game?  Was that the work of anarchists? Or was the Bruins fan an anarchist? So confused.

There have also been reports of racist and homophobic violence during the riot, and apparently at least one homeless man was beaten. Does that sound like left-wing extremists to you?

The point is, it doesn't matter what the catalyst was, or who started it. Thousands of people took part in the riot. Even if there were 30 or 50 or 100 anarchist activists in the crowd, the vast majority were not Black Bloc. 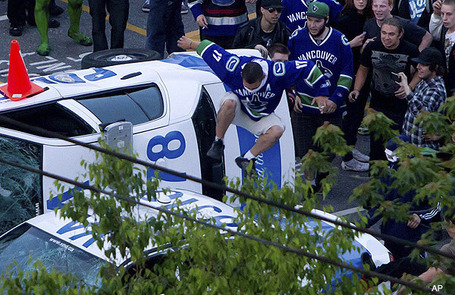 GT: I'd be shocked if there were even 30. As the days go on without the arrest of any 'outside elements' but the public apologies of more and more regular kids, these stories are looking more and more pathetic.

What we have, as far as I can tell, is a police department, city, and media, trying to wash the stain away from 'people like us' and shift attention from the fact that they shit the bed with the whole world watching, to blame some kind of leftist Black Bloc Boogeyman (which will come in handy the next time there's a real protest in the streets).

Before we move on, a special condemnation to those who blamed this on organized elements trying to start trouble "just like the G20" - the real story of the G20 was this or this - widespread police and security violence against nonviolent protestors. Don't forget that.

Interesting that this all occurred the same week Greeks took to the streets and rioted in protest of being forced to pay for the idiocy and losses of the financial elites of their country. So many people this week have asked "Why do Canadians riot about hockey??"

A better question might be "why don't we riot over the things that actually matter"?

KJ: I know you will disagree with this, but I think Bob McKenzie could have directed some of his finger-pointing toward his buddies in the media. Not to say that any mittenstringers caused this riot to happen, but I don't doubt for a second that some of the things we read and heard in the hockey media over the last two months helped many of the rioters feel justified in their actions.

I'm not talking about simple homer-ism here. That stuff is harmless. I love Bob Cole, but I can see why he pisses off the rest of the country. However, Cole's greatest offences are raising his voice when the Leafs have a shot from the red line and not knowing the names of any Ottawa Senators players.

The CBC crew, on the other hand, was brutal. They were essentially the propaganda wing of the Canucks front office since the series with Chicago, and it only intensified as the Canucks made their run to the final. Healy, Hughson and Simpson were like the unholy union of Hawk Harrelson and Glen Beck during these playoffs.

They manipulated video, distorted facts, encouraged and advocated violence, and outright lied in order to paint Vancouver as the white knights in the Stanley Cup Final. It was like watching Ann Coulter, Sarah Palin and Andrew Breitbart sitting around a table for a chat, with the Bruins as Obama and the Canucks as Tea Party Patriots.

Is this as harmless as Bob Cole? I don't think so. We're talking about Vancouver and the Canucks here. I've never encountered a fanbase that contains such a large segment of people who believe in conspiracy theories so outlandish that George Nori would laugh them off of Coast to Coast AM.

I know all fan-bases have their extreme elements, and the idiots are by no means representative of all Canucks fans, but there is something fucked-up out there in Vancouver. Sure, lots of Leafs fans are still pissed about the Kerry Fraser non-call back in 1993, but few people subscribe to some fantasy where Fraser looked the other way because Bettman wanted the Kings in the Stanley Cup Final. Those people are generally thought to be idiots. In Vancouver, this crackpot bullshit is popular with fans and perpetuated by the media.

GT: You sound like Toronto Star rabble-rouser and friend of the blog Damien Cox.

KJ: Well, I thought Cox's piece about the prevalence of conspiracy theories in Vancouver's hockey culture made some good points. Particularly these bits:

It was anarchy, and somehow, it was not just about Vancouver, a place where fans are encouraged by local media to believe there is a conspiracy to deny them ultimate success....

There's a strange mentality here that the NHL is out to get the Canucks, to deny them their rightful victories, and it's propagated by some very prominent media voices...

People really believe this stuff. Even after the game, Canucks coach Alain Vigneault bitterly talked about a Boston "plan" to defeat the Canucks that was based on illegal hits after the whistle, implying the league had done nothing to keep the games fair.

Did that paranoia create last night's riots? No. But its part of the story here, part of the anger and bitterness here, part of why a local reporter, angered that they were still blaring the music inside the arena last night long after the teams had left the ice, remarked, "Bloody Bettman" when he was told the music had to continue under orders from arena management.

Idiots and criminals created last night's ugliness. But hockey and this town's hockey atmosphere were part of it as well. You cannot pretend otherwise.

The media definitely didn't start or cause the riots - clearly alcohol and historic levels of stupidity were the main factors - but when we're looking for explanation as to why so many people appeared to completely lose their minds last Wednesday evening, this persecution complex should be looked at as a contributing factor. That riot was like the comment section of a Puck Daddy post about the Canucks come to life.

GT: Cox is wrong. Especially because I'm pretty sure there would have been a riot had Vancouver won Game 7. I agree in one instance - despite the thousands of thousands of great Canuck fans, including many who I'm friends with, that are great folks - there is a thin-skinned, insecure segment of the city and fanbase that are encouraged by a team and organization that does things in a bullying, classless manner.

From Francesco Aquilini, who reportedly screamed and swore at the national media after the game 7 loss, to Mike Gillis, who will probably sue me for tampering while writing this sentence and shamefully baited the referees before Game 7 against Chicago, to Alain Vigneault's churlishness, to players like Kesler, Burrows, Torres, and Bieksa, this is a team that bullied and complained their way to game 7, abetted and excused by their cheering section in the HNIC booth.

Which makes this column by the Provincial's Jason Botchford just perfect- before you complain about your Cup win being judged unfairly, your team should actually, you know, win the Cup.

The thing that saddened me most about the CBC's coverage of the finals - besides the knowledge that this douche crew will be covering Leafs games next year - was not just the homerism, but the thug mentality. Defending cheap shots, Healy defending the Rome hit on Horton, and worst of all, Simpson and Hughson advocating taking a run at Tim Thomas in Game 6 while Luongo was on the bench (if they really wanted to help Vancouver win, maybe they should have suggested running Lu). Add in Milbury and his "Sedin Sisters" bullshit - I mean, Don Cherry is almost a voice of reason at HNIC these days. That's terrifying. Is this what CBC thinks Canadians want? Knuckle-dragging?

But Canadians aren't violent, no sir. It must be those damn anarchists.