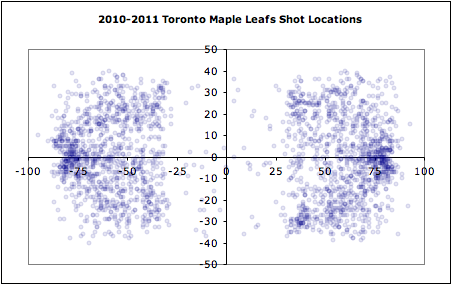 No, this is not a Rorschach test. If you see a butterfly or a pelvis in these dots, it's because you're spending too much time doing drugs and not enough time studying the 2010-2011 Toronto Maple Leafs' shot locations.

In the chart above, each individual dot marks the release point on the ice surface for one shot taken this past season by a Leafs player. Naturally, the dark blue areas are those with the greatest concentrations of shots, so even without the help of a red, blue, or goal line, you can get a pretty clear idea of where everything is. There is, for example, a predictable cutoff in shots taken at each blue line, and a more gradual decrease in the number of shots as the shooting angle to the net gets sharper. The areas of greatest concentrations? Yup, right in front of the nets.

As many of the regular readers of this site are already well aware, there is a propensity for almost any kind of data collected on home ice to show a scorer's bias, and I have parsed all the data over the jump by situation, and limited information to road games.

A special thanks and stick tap goes out to Gabriel Desjardins (a.k.a. Hawerchuk) for pointing me in the right direction to collect the data.

I should start out by saying that by no means am I a real expert in this field, as shot location has been studied in greater depth and much more rigorously before. Desjardins' Puck Prospectus post from 2009 was the first study of this nature that I'd ever seen, but it's far from the only one. All this is to say that this is not a post intended to study any broad trends or make any kind of general conclusions about shot location, accuracy, or frequency. Rather, this post does the opposite; we're going to look specifically and exclusively at the Toronto Maple Leafs.

This is only the first of a three-part series that I will be posting this week, so be prepared for much more thorough analysis, as I break down the Leafs shooters individually. In the third installment, I'll take an even closer look at how some players' shot patterns (most notably Phil Kessel's) shift over the course of the season. More than anything, this first post is intended to provide context to the following two, so let's get acquainted with some of the basic patterns.

For the sake of simplicity, I've mapped all of the shots so that they are displayed on one end of the rink, which helps to suss out patterns. It should be noted that although I've counted every single shot this season, this one-end view of the rink cuts off shots taken from beyond the red line. I've omitted such long-bomb shots because they only ever go in from the opposite end of the ice on empty-net goals (and that one Toskala let in, of course) and therefore are not taken at even strength, which most of my graphs are. Furthermore, it helps focusing on a smaller area, because differences in shot concentrations are just easier to see in this particular graph format.

Once again, here are all the shots taken this season, this time condensed into one end: 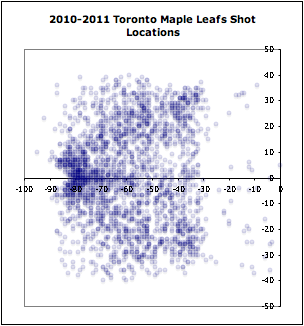 Here are all the Leafs' road game shots: 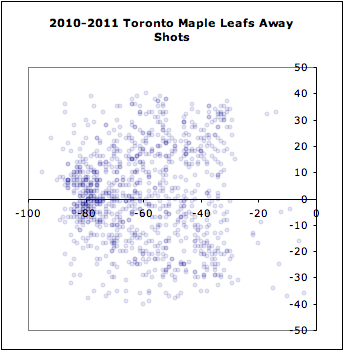 Below, we have all the Leafs shots taken at 5-on-5, and only for road games. This is really the main event of this study, since, as previously mentioned, scorer bias skews home game statistics, and different situations (i.e. 5v5, 5v4, 4v5, etc.) alter the patterns in which shots are taken.

I have to say that I'm surprised that there aren't greater shot concentrations around the blue line roughly in the positions where each defenseman stands. This may simply be a sample size issue (there are faint point spots in the 'Total Shots' graph), but it's also possible that our defensemen like to rove about more than most (we'll see which ones in my next post), or that the team generates more shots off the rush than via sustained pressure. 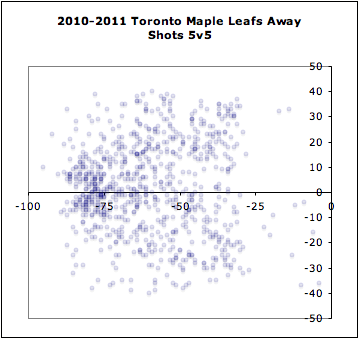 Next is a chart of the Leafs' Power Play shots (again, only from road games). There is no discernible shift in the patterns, but there's that 'sample size' thing coming back once again. 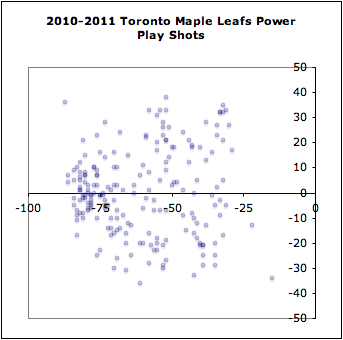 For the sake of completeness, we have shorthanded shots next, though there are so few, it restricts what we can say about them. I boosted the opacity of the dots in this graph to make it easier to read, but there really is very little overlap between shot locations, anyway. 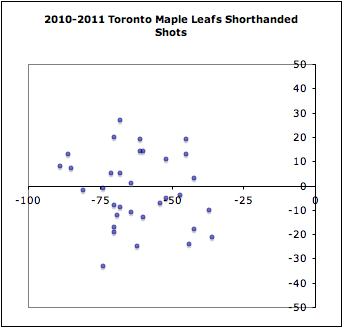 Next, we have the Leafs' Away + 5v5 goal locations:

The most obvious thing to glean from this is that goal concentrations follow shot concentrations pretty closely. It's no stretch to assume that there is a causal relationship between proximity to the net and the chance of a goal, but this graph is only complementary to much bigger studies on the subject.

More specifically, there seem to be a few more goals coming from the right point, which is probably due to the fact that the Leafs have so many left-handed shooters working the right point. Aulie, Gunnarsson, Lashoff, Lebda, Phaneuf, Kaberle, and Beauchemin are all lefties. Just eyeballing the other graphs, it appears that there are slightly more shots coming from the right side as well. 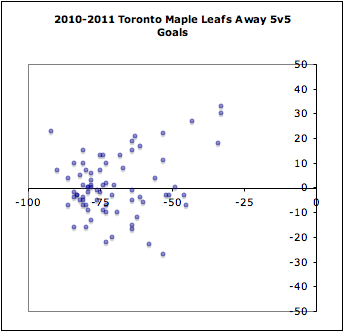 Lastly, we have the Leafs' power play goals on the road. It's tough to emphasize the importance of net presence enough. 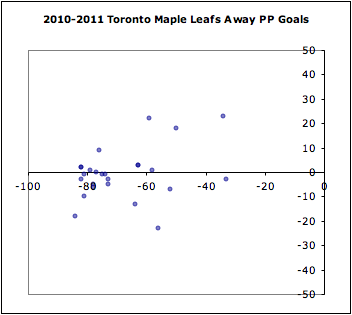