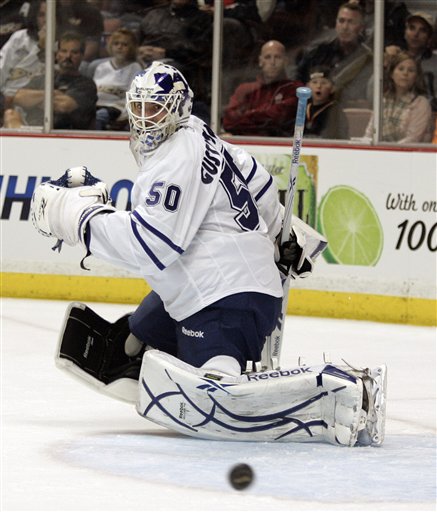 Editor's Note: Ben Schnell with an interesting post on what the Leafs neeed to do in order to hit the magic mark of .550 that would see them into the playoffs. Probably.

A few weeks ago someone posted a link in the FTB to a blog called Brodeur is a Fraud which mulls over a series of goalie stats. Among these stats is one metric the blogger created, called Win Threshold. This post will be taking a look at the Leafs' projected win threshold, the win thresholds of the rest of the teams in the league, how we can expect their goalies to perform, and how the leafs should fare.

[In 2008/2009] the Detroit Red Wings had the league's best offence, scoring 3.52 goals per game. They also allowed the second fewest shots against per game with 27.7. On the other end of the scale, the New York Islanders finished second last in both goals for (2.42) and shots against (33.5) per game. Quite obviously an Islander goalie would need to be much better than a Red Wing goalie for their teams to have the same chance at winning, because he would have to make up for his team scoring one less goal per game and he would have to do it while facing an extra half-dozen shots against.

We can calculate what I'll call the "win threshold" for the goalies on each team by taking (shots against - goals for) / shots against. This gives us the save percentage that would result in the team ending up with an equal number of goals for and goals against over the course of the season. If the goalie's save percentage is above that number, the team is likely to win more than the lose, while anything below the threshold means that the team should end up sub-.500 (or sub-.550 in the shootout era).

Follow the jump for further information on Win Threshold, and my analysis on how it should pertain to the Leafs next year.

Just to re-iterate the quoted portion, win threshold calculates the save percentage required--from a team, not their main goalie--to most likely attain a win percentage of > .550 (with shootout losses). Just for comparison sake, a 0.550% x a possible 164 points (82PG x 2) gives us 90 points.

To put these 90 points in perspective, it took 93 for the NY Rangers to gain the 8th spot in the East last year, though they could have gotten in with 92 points. This was substantially higher than 2009/2010, however, as both the Habs and the Flyers got in with 88 points. Thus, we will maintain the 0.550 win % as accurate, though the playoffs may actually require 0.561 (92 points).

With that said, let's have a look at the Shots Against, Goals For, and thus Win Threshold of each team from last year.

We'll just briefly look at a few things in that table.

If we take goalies out of the picture, and base our standings on Win Threshold (How good are the defense at preventing shots and how good are the forwards at scoring goals) this is the order we are left with:

Or if we only look at the Eastern Conference (as this is who we are in competition with), this is the order:

Of course goalies do count for something. Looking at the list, this is the reason Tampa Bay fell from 1st, and Boston, Montreal, and Washington all climbed higher that their respective positions. Buffalo and NY Rangers both eclipsed their Win Threshold, but not at as extreme a rate than the aforementioned teams.

In order to keep this post a reasonable length, continue on to Part II, which examines the Leaf's Skaters shooting percentages, and how this will affect our Goals For.