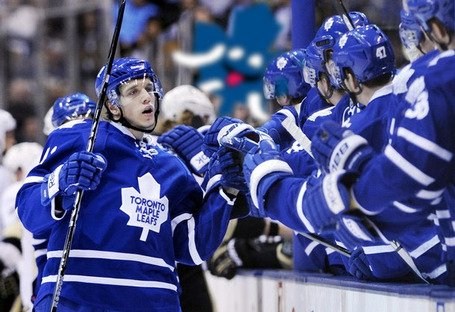 Editor's Note: Ben Schnell is back with part two of his Win Threshold analysis. This time he focuses on shooting percentages, historical results, and what they might mean going forward

In Part I, we calculated the Win Threshold of each team in the NHL last season, which examines how effectively the defense can limit shot and how effectively the offense can score goals. Now we have to put it all together by including our goalies, and predicting how we will continue next year. When looking at win threshold, this is how the Eastern Conference stacked up last year:

This post shall be a lot more hypothetical than the last one and even subjective in some places. This is necessary for a post like this as no one can see the future, though we shall try to be as analytical as possible with our outputs.

To begin, we will try to predict our Goals For for next year by examining the goals that were scored last year and any potential changes we might see.

I included the players who scored 0 goals because it is important to note that they are getting ice time though not scoring--thus impeding the ability of others to score.

Last season, the Leafs leading goal scorer, Phil Kessel, shot at 9.8% Percent. His career shot percentage is 10.3%, though it was 10.7% before last season. However, Kessel also shot more last season than any other year in his career, with 325 shots. Kessel has been gradually increasing his shot totals every year though, so perhaps this is his shots plateau and he may not decrease. This is left to be seen. Assuming he takes 325 shots again, at his pre-last year 10.7%, Kessel will score 35 goals. His career high shot percentage is 15.5% whereas his career low was his rookie season at 6.5%. If he took 325 shots at his high or low, he could put up 50 or 21 goals. It is most likely, though that he will continue to shoot at his career average, which is 10.3%, resulting in an anticipated 33 goals.

We will establish a table similar to the above table and then make certain adjustments based on anticipated roster changes.

It is important to realize first of all that the goal columns reflect the amount of goals each player would score if they shot at their career high S% or career low S% as opposed to their actual career high or low in goals. These columns take the number of shots they had last year and multiply them by the shot percentages.

The column to the far right represents the shot percentages of each player before last season, treating all of the shot percentages last year as outliers. Thus, going into last year's season, the Leafs could have expected 208 goals. The Leafs in fact got 213 goals including 10 from rookies Boyce, Kadri & Aulie.

If all the Leafs simultaneously decided to go Superman and shoot at their career high S%, they would have scored 310 GF, on the same number of shots, putting them well into #1 in the league that category, and likely overall. If, however, they decided to play like the Bruins and not really score goals--shooting at their career low percentages all at once--they would have only scored 155 goals.

What is more likely is that the Leafs continue to shoot around their career S% and pot 224 collectively.

Before moving onto the next section, however, we have to make amendments to our roster.

The Leafs lost the following production due to trades and UFA:

Fortunately none of these players are Mats Sundin or even players we were dependent on for offense, save perhaps Kaberle. The five players combined for 23 goals last year, or 10.5% of our offense. They also combined for $2,155,018 + $750,000 + $491,129 + $3,061,828 + $2,553,763 cap dollars (amount of Daily Cap Space Spent) or $9,0117,38 total. This reflects 17.1% of our total cap space spent. Now of course Beauchemin and Versteeg have been billed as defense-first players, so their salaries are inflated. Now lets say we input one offensively elite player, 2 stay at home D and 2 defensive forwards. If that offensively elite forward can put up > 25 goals we are looking at an increase in goals. More on this below. Our roster and devoted capspace for next year looks like the following, with anticipated RFA raises:

Even if we assume Burke blows the raises, and gives each of Bozak, MacArthur, and Schenn 0.5M extra, that leaves us with 8,935,000 in Cap Space to fill One Roster Spot. Now obviously a good way to gain some offense would be to sign an offensive player, such Brad Richards (who I fully advocate signing) who can give you the 28 goals he got last year, as well as ensure Kessel will hit his expected totals. Now let's just assume Burke doesn't go that route and picks up someone like Nicklas Bergfors or someone of similiar level. This will leave us at least $6M in cap space and we can anticipate the following totals from our 2 new additions (Bergfors & Liles).

So in an awesome move, and as we all know by now, Brian Burke somehow unloaded Brett Lebda for the 6'5 fantastic rising offensive defenseman Cody Franson??? Craziest deal I've ever heard of. We also picked up Matthew Lombardi who may be good for 20 games, and signed Tim Connolly UFA. An awesome series of moves IMO. I will take these changes and post a few adjustments to the numbers above.

Matthew Lombardi is also included on this roster, despite the fact that he will be replacing Connolly’s salary, because of the way the CBA payroll operates. At the start of the year, Lombardi’s salary is on the roster, before he is moved to the LTIR. LTIR states that you can replace the player of an equal or lesser value, but at the cap cost of the salary. Thus, Lombardi must be slotted into our lineup (in any position) at his 3.5M salary, and can be replaced with any player of that value or less. Replacing him will be Boyce, who makes substantially less than him, but will replace that salary. Hypothetically—and im not sure if this is possible—maybe the leafs could replace Lombardi’s salary with someone as close to it as possible? Correct me if I’m wrong, but could Lombardi’s salary be replaced with Colby Armstrong-making the loss on 0.5M in cap space-and then whatever line changes Wilson wants to make could be made? I’m not sure exactly how this works, so please inform me if any of you are aware. Regardless, this is why I included Lombardi.

So rather than Nicklas Bergfors, we get proven performer Tim Connolly. The problem is he's had some injury problems. According to him, and to Darren Dreger, he is healthy again, so we can at least expect him to play the start of the season until (if) he gets injured again. For this reason, but paired with the knowledge that he may very well get injured again, let's assume he only plays 60 games. We also picked up Matthew Lombardi, who has major concussion injuries, but is reporting himself, and has been reported by others to have been closer to returning. He says he will try to be ready for camp. I don't see this a a possibility, but let's assume he can make it back briefly at the end of the year. This would hopefully coincide with Connolly's preposed inury, and so we will say that Lombardi can play 22 ggames. Finally, we have Cody Franson who will play in Komisarek's spot, moving Komi to the 7hole, and Lebda to the Predators. Based on these assumptions, we can expect the following output from these players

There are a variety of further hypotheticals I could make but it's impossible to know what's going to happen next year. I am simply going to re-display our lineup and create a range of proposed goals for each of the 12 forwards and 6 defense. The shots for each player are indicitatve of the amount they shoot but in addition the amount of games they played last year. In the case of Phil Kessel, it is unlikely he will play an 82 game schedule again (though this would be awesome). To be fair, we will convert each of our player's GP to 74, and replace those 8 missed games per player with production from our 13th F and 7th D, as well as the 24 games we'll give to Colborne, and the 22 we'll give to Lombardi.

When initially made this post a few days ago, this is where I ended the Goals For analysis. Since there was a general positive response and I now know that people are actually reading this series, I will take it one step further and try to factor in average ice time. This is all subjective as Ron Wilson could suddenly throw someone into his dog house, or find a new Brett Lebda or John Mitchell to give undeserved ice time to. Regardless, I will pull up a list of the ice time each player received last season, and compare those numbers to where I anticipate their ice time to fall next season.

Below is a list of leafs players from last season, their position (subjective assignments to help determine comparables), their Even Strength Ice Time, Short Handed Ice Time, Power Play Ice Time, and Total Ice Time. I will use this list as the template for next year’s roster, taking the position to determine the Even Strength Ice Time, and factor in the Power Play / Short Handed Time based on whether they play said situations.

From these splits we can make the following anticipations based on our current roster:

What this tells us is that rather than simply calculating the number of shots and thus goals by the number of games played, we should factor in the approximate ice time of each player. When averaging all the ice time predictions I’ve made, we end up with a fair distribution of possible ice time, so there is no inflation. I’ve given Bozak the Ice Time of Colby Armstrong, as they both play 3rd line and the PK. I felt Kadri was roughly equivalent to Versteeg, as they are both smallish wingers who play 3rd line ES but get PP time. John Michael Liles is Kaberle’s replacement. Keith Aulie and Mike Komisarek will play the same sort of minutes, so they get 3rd pairing, with some PK time. Cody Franson also gets 3rd pairing with PP time. The huge guess is that Carl Gunnarson is able to replicate the minutes of Francois Beauchemin. Joey Crabb & Daryl Boyce are now solely 4th liners with some PK time (where last year they were tried on the top unit). Tim Connolly gets Phil Kessel’s ES minutes & PP time, whereas Matthew Lombardi get’s Phil Kessel’s ES minutes & PK time. Joe Colborne play’s Kadri’s minutes from last year. The MGK line keeps their minutes from last year. Lupul, Armstrong, Orr, and Brown all keep their minutes.

When we make these changes, the goal output is almost exactly the same as if we used games played, however, it sees the leafs take about 45 more shots.

The points I made in my first publication are still relevant, except there are a few to add:

Remember that these are all predictions, but we shall use these predictions to calculate the Leafs new Win Threshold.

Barring any injuries to our key contributors, the Leafs are good for about 240 Goals For next year. I would even venture to say they can collect 245 if Kadri’s shooting percentage balances out, and 250 if our players stay healthy. Of course the other side to this is that with a major injury to one of our key players, we could lose 10-20 goals. In this case we could expect around 230-235 goals for. I will run these four numbers by our Win Threshold to determine what kind of save percentage we should be looking for.

Thanks for reading Part II (again). Part III should be posted this week, and will examine our defense and goalies, and how this will affect our Win Threshold.