In my first post, I took a look at the entire team's shot locations. In this post, I'm focusing solely on shots taken at 5-on-5 while the Leafs were on the road. To a large degree, the patterns are dictated by a players' position, and reflect very basic ideas about where players stand. Wingers will usually have a few more shots on their side of the rink, centers are often driving the net, and defensemen usually tee up a few feet off the blue line. Beyond these mundane observations however, are interesting little differences in how each player approaches their position.

One nice aspect of this study is that it can help confirm or dispel any ideas we have about the "style" a player plays. Similar to the way that advanced stats are often best when they match up with what you already know about the player, these shot locations help us visualize what we often already generally know to be true.

Luke Schenn and Dion Phaneuf, for example, have wild differences in their respective shot patterns that I would be very reluctant to write off entirely as a sample size difference. Schenn, for instance, sticks almost exclusively to his side of the ice and fires from the most remote corner of the offensive zone, while Phaneuf roves all over the place. Do we know that Phaneuf likes to try to jump-start our offence? Yes. Do we know that he also gets caught pinching somewhat more frequently than a guy like Schenn? Oh my, yes.

A good thing to keep in mind when looking at these graphs is this one, created by Gabriel Desjardins, which shows the chance of scoring from different areas of the ice: 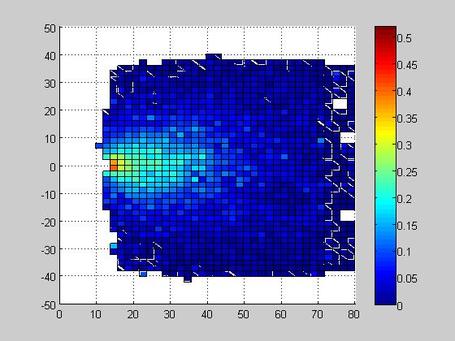 There are a few players that you won't find in this bunch of graphs, simply because they didn't take enough shots for me to bother making a graph for. John Mitchell and Mike Zigomanis, for example, have been left out of this little chart party. I didn't use any particular cutoff, but I doubt any of you will be very curious about the players I've omitted.

Also, in response to Chemmy's request, I've added in NHL rink lines to help situate the shots, as it can get difficult if there isn't a large sample size to suggest where the net is. 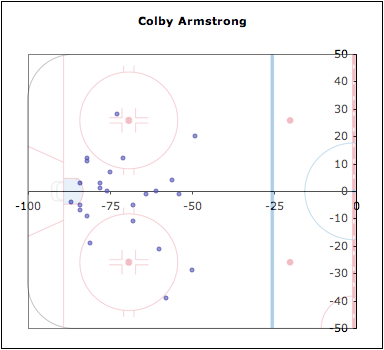 Armstrong is often described as a hard-nosed kind of player, and though he's definitely got the nose to support such a claim, it's hard to say for sure what it is exactly about his style of play that puts him in such good areas to shoot. We're not looking at a lot of shots here, but most of them are coming in the prime scoring areas: right around the net and the middle of the slot. It's this kind of thing that makes him a serviceable plug for your second line in case of injury. 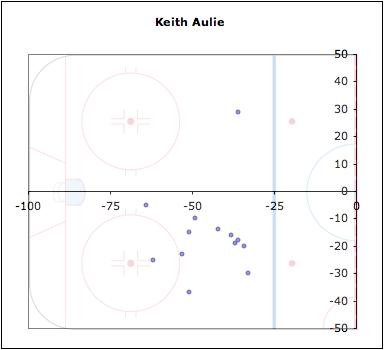 Shocking news story of the day: Keith Aulie is another stay-at-home defender. He doesn't leave his side of the ice, has never shot even as deep as the hash marks, and keeps his big wookie ass close to the line in case he needs to start retreating. Of course, you would too, if your partner was Dion Phaneuf most of the time. 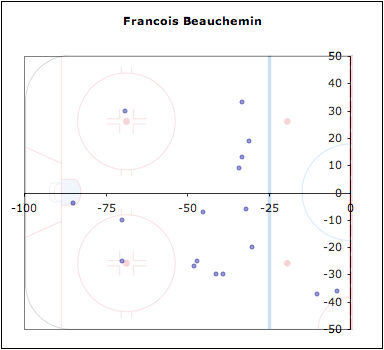 Beauchemin, as you will probably have guessed, likes to slide across the blue line every now and then, and makes a very rare attempt to pinch to the hash marks. Note the two shots behind the blue line, which probable indicate he was dumping the puck on net for some fast-moving forwards to swoop down on the goalie looking for rebounds. 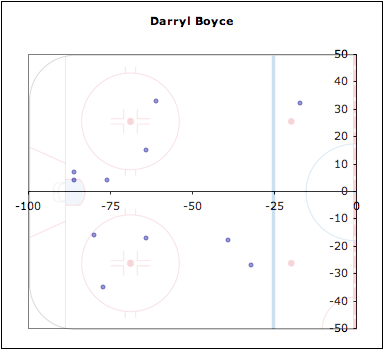 Again, we're dealing with a very small number of shots, but Darryl Boyce isn't showing us that he has any kind of preferred shooting range or area. He doesn't seem to have picked up rebounds with any consistency, otherwise you'd think we'd see more close-range chances. This suggests that he's not one of those players willing to "go to the hard areas". 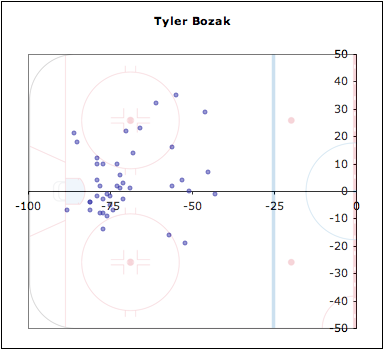 Now here's a snake-bitten man. Bozak went to the right areas to score, but wound up with a 12.5% shooting percentage (I know, not terrible), which is a bit of a drop off from the previous season's 15.7%. If he continues to skate to these areas (and happens to play with his good buddy Phil from time to time), I suspect we'll see that shooting percentage bob up just a little. Shooting more often would help him most, though. 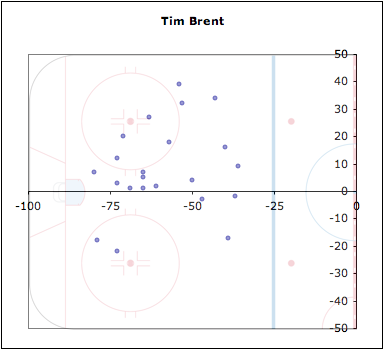 Tim Brent does not seem to have what folks in the hockey world call a "nose for the net". Firing shots from all over the map, very few of them are from high-chance areas. If you just thought "yeah, that's about what I'd expect from a replacement-level player", you're right. 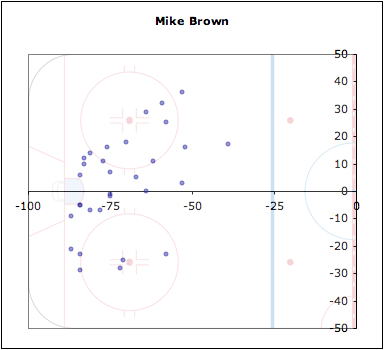 The two main differences between Brown's shot locations and Brent's are the number he took, and a slight shift inward towards the net. Brown's a fourth-line guy, and shoots that way. 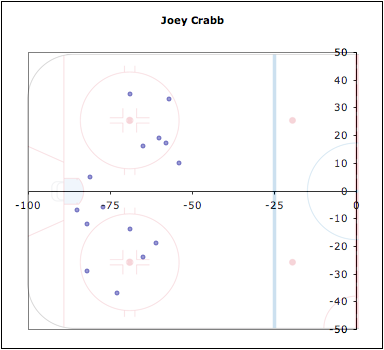 Not quite so far out as Brent, but also more evenly distributed on each side of the ice than Brown, Crabb took a lot of mediocre-quality shots this year. I think he also benefited from spending some time with Phil Kessel on his wing. 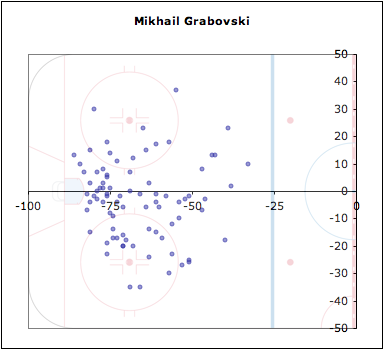 Here's what a #1 or #2 center's shot locations look like. His shots concentrated around the net and high slot, Grabovski knows where the net is, and brings the puck there before shooting. Sure, we're also dealing with a big jump in sample size, and a guy like Crabb may have looked better with some more ice time, but not this good. 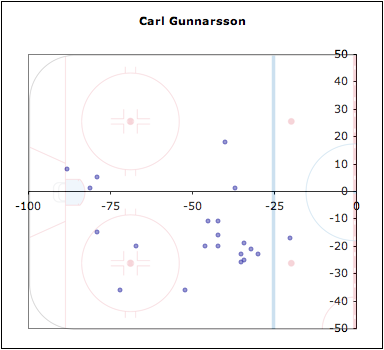 I find it interesting that Gunnarsson pinches more than many of his fellow defenders, but that he never strays onto the other side of the ice. Schenn, his most common partner at even strength, certainly sticks to his own side as well, so it's possible they're having an influence on each other. Ditto for Komisarek. 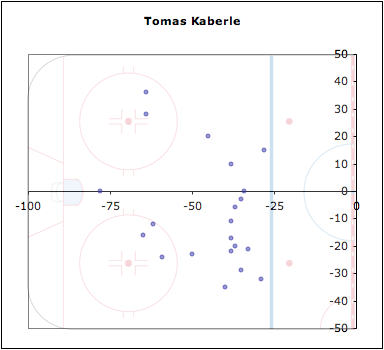 When it began to look inevitable we were going to lose Kaberle, a lot of people hoped that Gunnarsson would be able to step up and fill at least some of the void left by the apple-cheeked Czech. While it never seemed entirely out of the question, their shot locations emphasize some differences in their respective games.

Kaberle is a much more mobile player along the blue line, but he doesn't pinch (or join the rush) as often as you'd think. I suspect that this is partially due to the fact that people conflate the idea of a 'puck-moving defenseman' with  what you might call a 'rushing defenseman'. I guess I wouldn't characterize Gunnarsson that way either, but Gunnar seems to pinch a little more often. 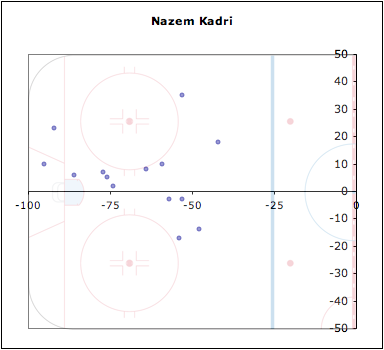 I'm really reluctant to make any comments about Kadri's shot locations, since we don't have enough of them to say for sure, but, similar to Grabovski, we see most of his shots concentrated in the middle of the ice, in the high slot or close to the net. I'll take this as a very small, but good sign. 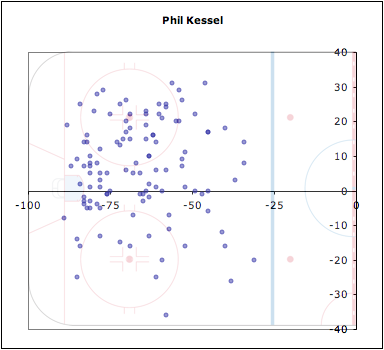 Whoa. Phil Kessel would shoot from outer-space if he was sent up there with a puck. He's basically a pitching machine on skates. I don't mean to say that this is entirely bad, because I'm positive that his linemates are the beneficiaries of a lot of rebounds, so it's still driving offense. We can only see a little concentration in the shots around the net (compared to Grabovski or Kulemin), though I do notice that he usually sticks to his own wing.

I have a theory that Phil Kessel's goal-scoring slumps may be quite closely linked to where he is taking his shots, but more on that in the next article. 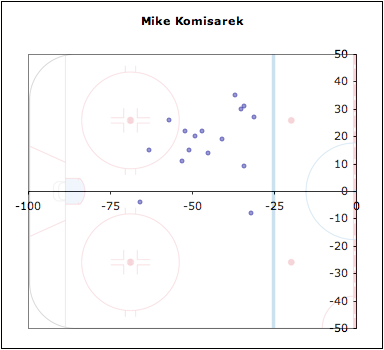 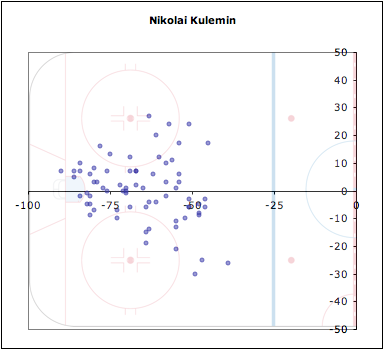 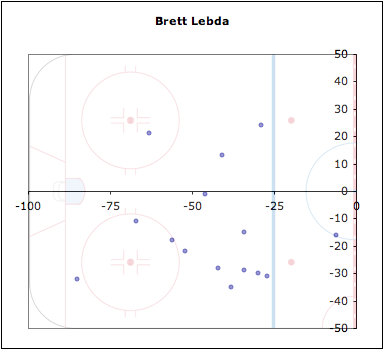 Despite being billed as a guy with wheels, and someone that could spark some offense, Brett Lebda did not do anything of the sort, and doesn't appear to have even taken any shots trying to do so. This looks like a slightly smaller sample size of Carl Gunnarsson. 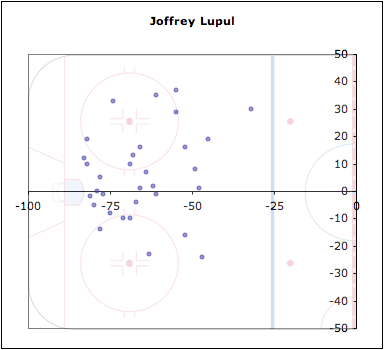 Top-six winger. Concentrations around the net and high slot. 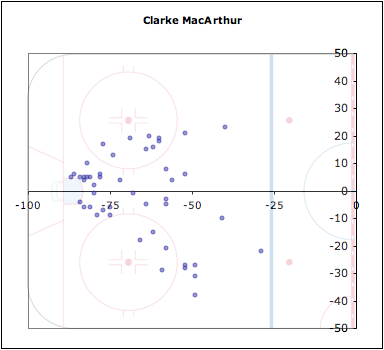 Here's another top-six winger. MacArthur does have quite a number of shots that, plotted, make roughly a 45-degree angle to the net off his wing, which I would guess means he shoots on the rush quite a bit. 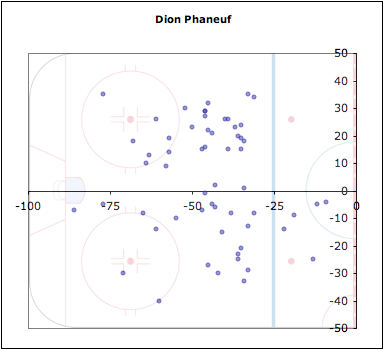 Phaneuf is some kind of roving monster. The guy is just all over the map. You'd hardly know by looking at this that he plays the right side with any kind of regularity, but it's abundantly clear that he loves to shoot, and he doesn't mind walking in across the top of the circles to start firing. 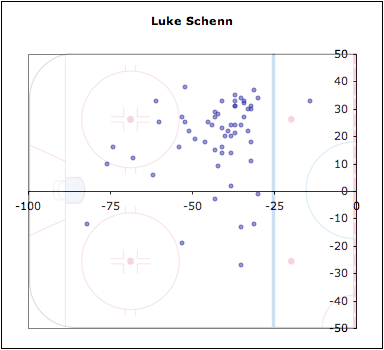 Luke Schenn appears to be nearly afraid of the net, but in his case, it's more about being afraid of who's at the other net. It's a safe playing style to adopt when you're a stay-at-home defenseman, and your goaltenders have been Vesa Toskala, Jean-Sebastien Giguere, and Jonas Gustavsson for the bulk of your tenure as an NHL player.

You let your ol' buddy Mikhail Grabovski take care of the shooting there, Luke. 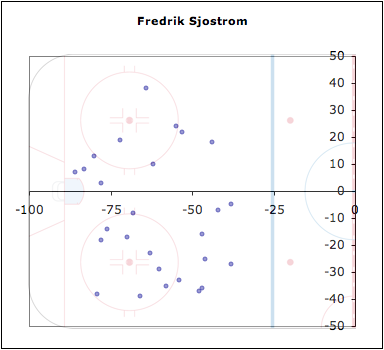 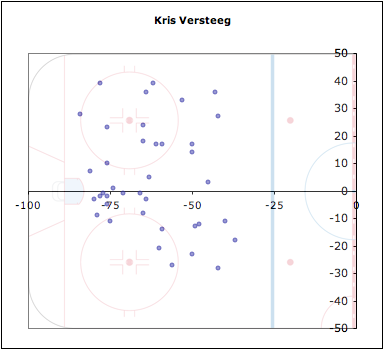 Versteeg is a bit of a funny animal, in that he had a pretty good (if limited) run on the PP cranking shots from set locations, but doesn't seem to have pushed his way to the net often enough at regular strength. There is a slight concentration in front of the net, but there are a lot of long bombs here that off-set those good chances.