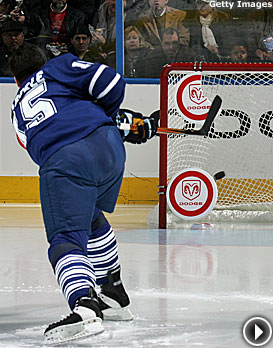 In hockey, as in life people do irrational things and hold erroneous beliefs. This truth manifests itself daily in the MSM, on Twitter, and around the blogosphere in general. No one is beyond reproach. It's not our fault. Our brains make mistakes that affect our judgment and our ability to properly synthesize information. This leads us to believe and advocate crazy things. That's the bad news. The good news is that we all make the same mistakes and that these defects have been studied and the implications recognized. A lot of books have been written that detail why we do and believe the things we do.[1] As I read I am struck by how many cognitive biases relate to our experience as fans and observers. I have been mulling writing about this for a while and owe some inspiration to Kent Wilson as his work has been an example of what this type of post would look like. Derek Zona over at Copper and Blue also wrote and excellent article about confirmation bias and its influence on our opinions about players.[2]

Join me after the jump for an examination of the most prevalent bias in hockey.

Cognitive biases are ingrained into our thought process. The more we confront them the easier it will be to identify when we are under their influence. What I intend to do is write a post for each type of cognitive bias or condition that manifests itself in fandom and analysis. If we can gain a better understanding of why we think the things we do we'll ensure that our opinions are based on facts and rational arguments. The upshot is that we'll end up being right more often than not. And hey maybe someone with decision making authority will read and it will prevent them from making an irrational decision.

The most common bias among analysts and fans alike is confirmation bias. Players have reputations for being "clutch", "soft", "enigmatic" or "never shooting the puck". More often than not the data does not support these reputations. We cling to these beliefs due to the influence of confirmation bias. Put simply Confirmation Bias is the tendency to notice information or events that conform to one's established opinion or viewpoint and ignore that which runs contrary to it.[3]

Confirmation Bias is often the first bias that influences our opinion of a player. It starts the moment a player is drafted, sometimes before. We read a draft preview, we watch a highlight reel on youtube, and form an opinion of the player based on very little information. The 2011 draft is a great example of this. There were many people here advocating for one player or another. I had very little familiarity with any of the prospects. My opinion was heavily influenced by those who were confidently advocating for one prospect over another. Many were disappointed with the picks made by Burke. Biggs and Percy have already been labeled by many as "having considerably less upside" and "safe picks". This perception will shape our expectations of them and influence the way we interpret any information about their development. The labels may end up being correct, but it's important to be aware of how our opinions about them can be influenced.

Opinions based on anecdotal evidence and memories are most likely to be influenced by confirmation bias. The best example is the reputation Tomas Kaberle has for "not shooting the puck". This reputation is not limited to Leafs fans, most hockey fans believe this. Throughout the playoffs people I was watching the games with would remark "that Kaberle is good but he doesn't shoot the puck enough" or some other such malarkey. The problem with this is that his statistics show that he shoots at an above average rate. He is one of only 34 defensemen to register over 100 shots in 5 seasons since the lockout. He would be one of 12 players to have done it in all 6 seasons had he not only played 57 games in 2008-2009. (he had 93 shots that year) Take a look at the players on the list.[4] How many of them have a reputation for "never shooting"?

People are more likely to remember the times Tomas didn't shoot than the times when he did. This makes sense. Imagine Tomas is on the point on the PP and elects to pass instead of shoot. If no goal results fans will complain that he "should have shot" and this instance will further cement their belief that he never shoots. If his pass results in a goal fans will likely disregard the fact that Kaberle's pass lead to the goal and remember it as another example of his reluctance to shoot. If Kaberle does shoot it will likely be met with surprise and equally disregarded "Huh, usually Kaberle never shoots". People will find a way to conform the evidence to their established beliefs. While opinions based on anecdotal evidence are much more likely to be influenced by confirmation bias, statistical arguments are not immune. Those using statistics to support their argument often only cite the statistics that support their hypothesis and ignore those that do not. We must make sure that we consider every possible statistic and measure of player performance when evaluating player ability.[5]

So what? The most important thing to take from this is that a player's reputation can be heavily influenced by confirmation bias. We all need to be willing to re-evaluate our opinion of a player based on evidence brought forward by others. When evaluating any player we need to be aware of confirmation bias and ensure that we use as much evidence-statistical, situational, and intangible- from both sides of the argument to form your opinion.

Being a fan is irrational. Our opinions need not be.

[1] My favourite examples are: How We Decide by Jonah Lehrer- he writes and excellent blog over at Wired called the Frontal Cortex-, Predictably Irrational by Dan Ariely , and Sway by Ori and Rom Brafman.

[5] In the course of researching this post I discovered that Jonah Lehrer wrote a piece for Grantland discussing the potential biases that can influence advanced statistics. He speaks mostly about Baseball and Basketball but it's an interesting read nonetheless