Jonathan Willis' recent post on what kind of point totals we should expect out of first liners has generated a lot of discussion. Willis asserts that 50-60 points is an average amount for a first liner to score, which contradicts the expectation that many people seem to have that a first liner is a point-per-game player. One frequent criticism of Willis' piece is that no one really cares how many points a first-liner on a bad team scores, since no one wants their GM to build a bad team (except for the small number of teams tanking for lottery picks).

I think that's a fair point, and I think there are some other things worth examining too. For one, what is the breakdown like between a team's top-scoring forward and its 2nd and 3rd scoring forwards? Pittsburgh's top three scorers in recent years have been Sidney Crosby, Evgeni Malkin, and Chris Kunitz, and while they may all be "first liners" in one sense, there's a significant gap in talent between Kunitz and the other two that's worth taking note of. Another question I had was whether the results look any different if you look at seasons prior to the current one? This year saw some of the league's top scorers in recent years miss significant time due to injuries (Crosby, Malkin, Ryan Getzlaf, Pavel Datsyuk) while others had years that were well below what they've been capable of achieving in the past (Alexander Ovechkin, Niklas Backstrom, Joe Thornton, Dany Heatley). Follow me beyond the jump to see how those questions play out.

Before we get to the actual data, I'll explain what data I collected and what I was looking for in that data. I went through all of the playoff teams from the past 5 seasons and noted how many points their top three scoring forwards had, dividing them into 1st, 2nd, and 3rd scorer to take account of the differences between them. This doesn't strictly speaking give you a team's "first line" since those players don't always play together (Crosby and Malkin often play apart, and the Sedins rarely play with Ryan Kesler at even strength, for example), but I think it gives us a pretty good idea. I've then averaged the totals for each playoff team each season to give us an idea of what an average "playoff" first line looked like that year.

And here's a chart showing the same information, because pictures are fun: 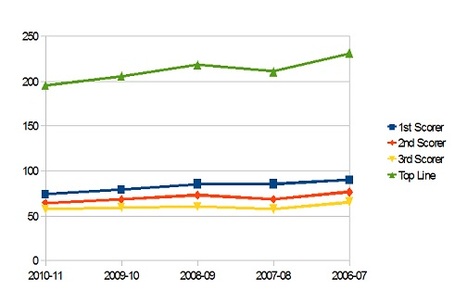 A couple of things are clear from this data. The most obvious to me is that this year the totals are well below what they've been in other recent years - every single category I measured had a lower total this year than in any of the previous 4 seasons. This year's average top line had nearly 17 points less than the 5-year average (a little over 5 points per player), and a startling 36 points less than the highest year recorded here, an average of twelve points per top line player. While the typical 3rd forward has scored at roughly the same pace over each of the past 5 seasons, the 1st and 2nd forwards have had their totals fall considerably.

I think the totals for years other than this past season actually mesh much more with what people think of a "first line" forward being. In 3 of the past 5 seasons, the top regular season scorer on each playoff team has averaged over 85 points (more than a point per game) while the average 2nd highest scorer in these 5 seasons scores right around 70 points (a sizeable drop, but still close to a point per game). There is then another pretty big drop down to the 3rd leading scorer, who typically scores closer to 60 points. This contradicts what Willis found, since it's really only the "worst" of the top line scorers who average 60 points per year - the top two players average significantly more.

So that's how well the average playoff first line scores. Using the playoffs as a cut-off point makes sense for this discussion because regular season success doesn't contribute directly to the playoffs, aside from the initial act of qualifying. Obviously scoring more points in the regular season doesn't win you any games once the post-season comes around, but still, I thought it might be interesting to examine the top 3 regular season scorers from each of these playoff teams by sub-dividing them into which round of the playoffs they made it to. So I've divided them into teams that lost in the first round, teams that lost in the second round, teams that lost in the conference finals, and teams that made it to the Stanley Cup finals. Because the sample size is so small by the point you reach the SCF, it didn't make much sense to divide them into winners or losers at that point. Here are the results:

And again in chart format because what kind of monster doesn't enjoy charts? 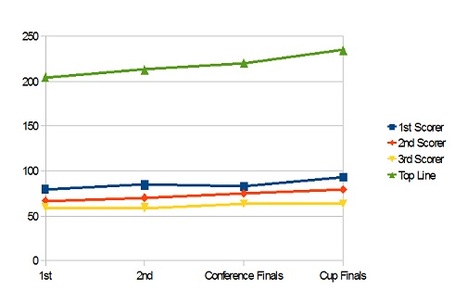 It turns out that regular season scoring does have some correlation with playoff success. The average number of points that each first line scores based on which round it loses in goes up by a fairly notable margin with each successive round. The average team that makes the Stanley Cup finals scores on average 10 points more per first liner player than teams that lose in the first round. As before, the difference is most notable between top scorers - where the gap is roughly 14 points - and 2nd leading scorers - where the gap is 13 points. The gap between 3rd leading scorers is much smaller, at just 4 points.

So there you have it. It seems as though there is a pretty clear distinction between the top 3 scorers on playoff teams over the past 5 seasons. When people say they want their team to have more first liners, I think what they mean is that they want more players who fit the mould of the 1st and 2nd best scorers on the playoff teams I examined, who average 83 and 70 points respectively. Having those players does, in aggregate, seem to bear a strong relationship to winning in the playoffs, which is what most of us what our GMs to build our teams to do.