Editor's Note: Good Lord, if you write a fanpost like this then you will see it on the front page. An amazing analysis of 30 goal scorers, Nikolai Kulemin, and what it takes to repeat a 30 goal season. 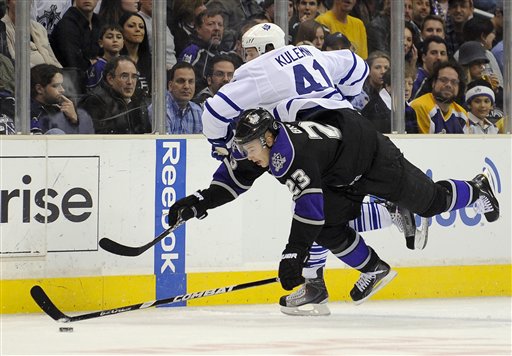 One of the hot topics in Leafland this summer has revolved around one of our (very few) T.O. developed talents, Nikolai Kulemin. After scoring 16G in 2009/2010, Kulemin earned himself a 2 year, $2.35M/season contract in a deal that is now looking like a short term steal. Don't expect him to come this cheaply after next year, Leafs fans. Kulemin exploded for 30 G in 2010/2011, and short of a hugely disappointing contract year in 2011/2012, Kulemin will be looking to get paid and will be looking at the recent Dubinsky/Callahan contracts as comparables.

But can he perform like last year again? A quick scan over his stats shows a whopping 17.1 shooting percentage, as compared to his previous career average of 11.3%. The immediate reaction is to label him a "regress to mean" candidate that is slated for a pullback in production. And I don't necessarily disagree.

How does he compare to other 30 goal scorers? Will he be a one-hit wonder? Should we expect 20G from Kulemin going forward, or could he see 30+G again? After the jump, we'll see where he stands within the 30G group, as well as what he (and the coaching staff) have to do to keep Kulemin's game at an elite level of production.

To see how #41 compares to other 30 goal scorers, I took a look at every player that had at least one 30 goal season since 1998/1999. Why 98/99? Well, because this is when they started publishing TOI data for all players, which I thought might be a useful stat to use. However, the sample data includes ALL career data on players that scored 30G from the 98/99 season onward, and as such certain prior seasons will not have TOI data included and were therefore excluded from any TOI analysis. The result is 150 players ranging from Scott Gomez to Steve Yzerman, all with different styles, draft pedigree and upside potential, but all with 1 thing in common - they at one point scored at least 30 goals. 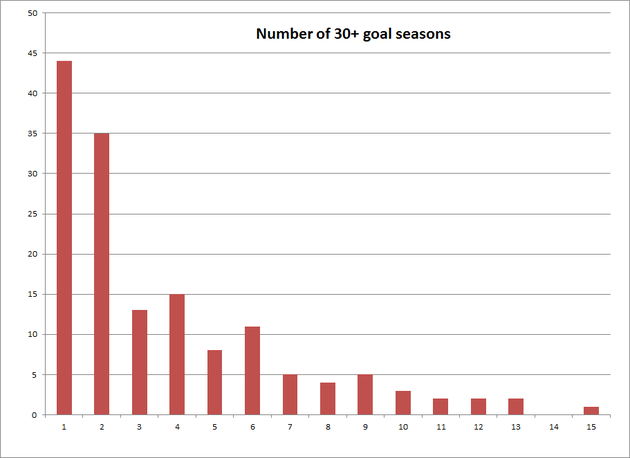 What's interesting about the above chart? Well, for one thing, 71% of the players that scored 30G at least once did it again at some point in their careers. Another thing to remember is that the sample includes players that are still playing and many have a high probability of another 30G season in them - Jeff Skinner, Logan Couture, Derek Roy and Nicklas Backstrom to name a few. Another neat bit of info, only 3 players in the sample had 13 or more 30G+ seasons in them - Jaromir Jagr, Brett Hull and Mats Sundin. 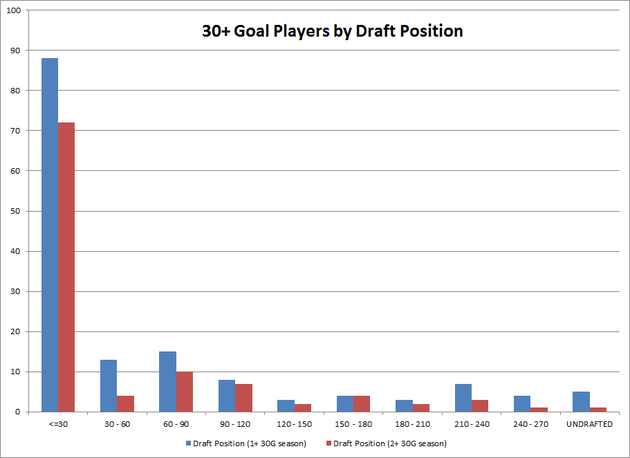 This chart shows in a rather dramatic fashion how obviously important early draft picks can be to acquiring high-end goalscoring talent. 59% of the players in the sample were drafted by pick #30 or before, with 48% of those having multiple 30+ goal seasons. The only undrafted player in the sample with multiple 30+ goal seasons is Martin St. Louis.

Shooting % and Why it Matters

Below we see the first dramatic instance of how shooting % affects total goal output - depending on whether you look at his pre-2010/2011 sh% (~11.3%), his career sh% (~13.6%), or his 2010/2011 sh% (17.3%), the expected output ranges dramatically. The 17.3% stands out not only because it is substantially higher than his previous and now current career sh%, but it was quite a bit higher than the Sample Group's sh% as well. In seasons where the players in the sample scored 30+ goals, the group averaged 15.4%, and in non-30G seasons the group average was 11.5%. In some ways this is positive news, as a fallback to only 15.4% rather than 11% would give Kulemin a significant chance at repeating the 30G feat. Below is a graph of Kulemin's 10-game moving average sh% throughout the year, as well as how his he compares with the Sample Group. 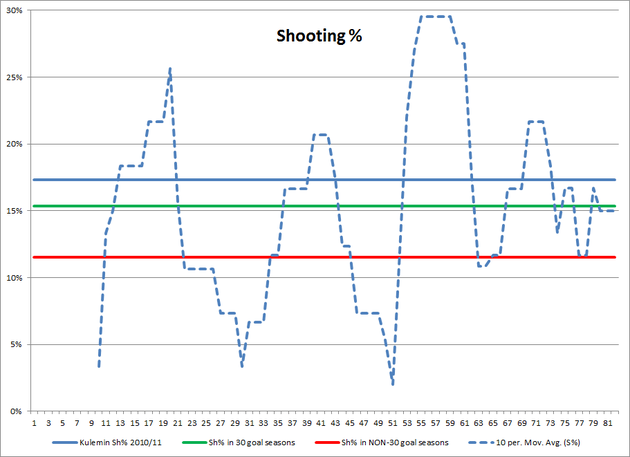 This one is obvious, but can't be emphasized enough: Getting to 30G requires not only talent, ice-time and a bit of luck, you can't be taking injuries. The Leafs were incredibly lucky with injuries to their Top 6 last year, and Kulemin was no exception - 30 goals scored in 82 games played. Regardless of what his shooting % returns to or how often he shoots, his number of games played will be one of (if not the most) significant factors in re-achieving 30 goals.

The Sample Group splits shows the importance of staying healthy - in seasons where the players in the sample scored 30+ goals, they played on average 78.1 games, while the seasons they did not accomplish that feat, they played on average 62.7 games. Kulemin has proven extremely resilient thus far in his career, and short of an unpredictable injury there is no reason to conclude that 78+ games can't be achieved in 2011/2012. Depending on what shooting % he achieves, this could mean he could achieve anywhere between 18.6 and 30 goals, holding all other factors constant. 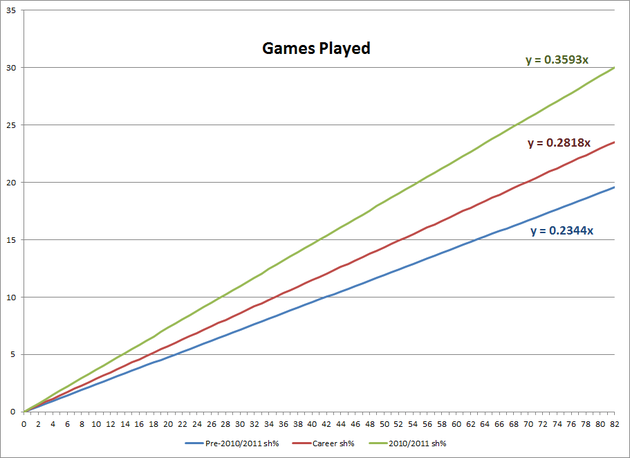 The amount of ice-time a player gets is a huge factor in his total production. But ice-time shouldn't just be handed to a player, they have to able to do more with the time given to them than other players or they see themselves getting bumped down the depth chart.

This is one area where I believe there is room for a SIGNIFICANT increase to Kulemin's game. Not only did Kulemin score 30 goals last year, he did it playing a paltry 17:19 per game, with on average 0:55 of that spent on the PK, which was actually an upgrade as he had played 13:48 and 16:22 the previous two seasons, bringing his career figure to 15.54 minutes per game. The players in the Sample Group on average had 19.37 minutes of ice-time per game when they had 30+ goal seasons, and just over 17 minutes in seasons they didn't. 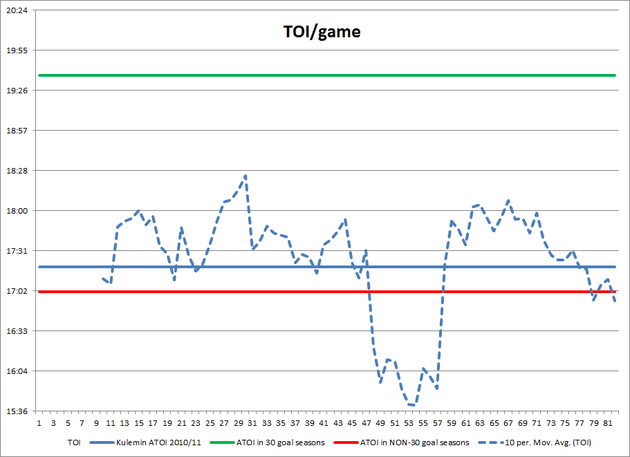 As we see in the table and chart above, by increasing Kulemin's ice-time from 17.19 to the Group average of 19.37 in 30+ goal seasons, Kulemin could have seen his goal output raised between 2-4 goals over the course of the season, depending on the realized sh%, all other factors being held constant. If MGK dominates like it did last year, we may see the line a lot more in 2011/2012. Oh and if you're wondering, the significant drop around game 48 was due to him seeing 5:48 in ice-time that game after being punched in the face by Tim Gleason. And before you ask, excluding that game only moves his average ice-time up to 17.27. 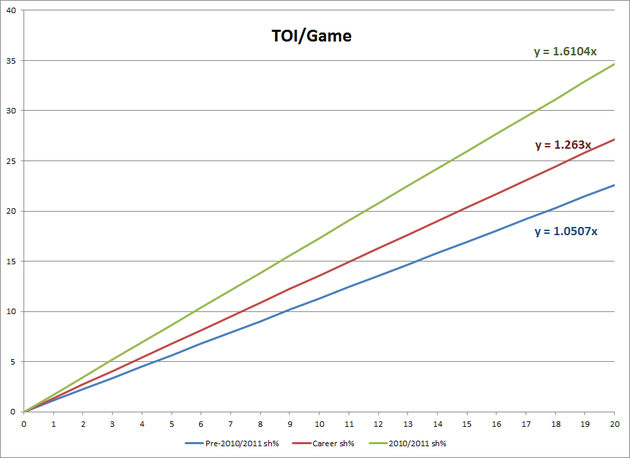 I'm going to avoid the "shot quality" discussion entirely here, so anyone who wants to expand please feel free in the comments. But it's hard not to agree that all else being equal, shooting more will lead to scoring more, and that's why for the purposes of this analysis I'll say: If Kulemin wants to repeat that 30+ goal season, he needs to shoot more. A lot more.

Despite his great goal-scoring production last season, Kulemin didn't really shoot a lot more with the ice-time he was given than he did in previous years, around 7.3 shots/60 minutes of ice time. Comparatively, the players in the Sample Group shot at 9.46 per 60 minutes of ice-time in 30+ goal years, and 8.49 per 60 minutes in non-30+ goal years, both still well above Kulemin's level of shot output. From the table above, we can see that had he shot as much as the Sample Group's average during 30G seasons, Kulemin could have increased his output by as much as 9 goals, holding all other factors constant. More realistically speaking, if his sh% falls back down to his career average, he could still reach 30G by shooting at this increased rate of 9.46 Sh/60. 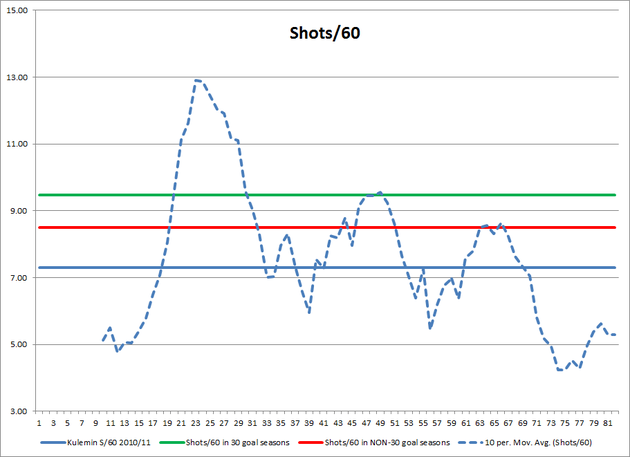 I find this graph to be the most interesting of all as it really highlights how much less Kulemin shoots in comparison with the 30+ G Sample Group. Even more so, it seems that he actually was shooting less and less per 60 minutes of ice-time as the year went on. Whether this situation continues next season will be one of the largest contributing factors to his production success. 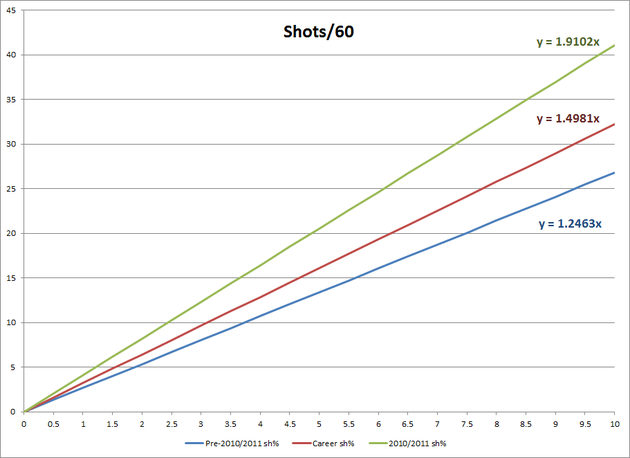 Well, I chose these 3 factors not only because they are the obvious way to increase ANY player's production, but also because I believe they are all EQUALLY important in determining the final goal prediction, so in my final calculation I will equally weigh the 3 to come up with a final figure.

Sh%: Since every one of the predictions is based on a guess for sh%, I'm going to go with his career sh% (13.6%) as it seems to be as good a guess as anything else.

Games Played: No matter how much I hope and pray that Kulemin sees 82 games next year, I gotta go with the career average (77.7) for the estimate.

Ice-time: Why Kulemin started seeing less time on average as the year went on is a headscratcher for sure, one that I will look into more separately. Did Kessel's line start getting hot? Was MGK used more to shutdown opponent top lines rather than get premier ice-time? Does Kulemin perform better given a lighter workload from an ice-time perspective? Whatever the answer, I have to think that based on his outstanding performance last year, he will receive a bump in ice-time, which I'll guess is 1 full minute more, up to 18.19 minutes per game.

Shots/60: Whether he knows it or not, Kulemin has to be shooting more with the ice-time he's given if he's going to repeat for 30 goals. That being said, there didn't seem to be many indications that he was starting to shoot the lights out as the year went on, so maybe his on-ice success has more to do with being in the right position than shooting the puck every time he touches it. Whatever the case, unless he actively works at changing his game to shoot more, I have to guess that we'll see something along the lines of his career 7.24 Shots/60 minutes again next year.

So, given the equation, what would YOUR prediction be? Am I being too conservative/aggressive with the Games Played, Ice-time and Shots/60 predictions? Can Kulemin maintain a high shooting % or was this a 1-off year?

As always, glove tap to Hockey-Reference for the use of their spectacular hockey database.

All Data used in the above post available here.

For the 100th time, how many goals will Kule-Aid pot next year?