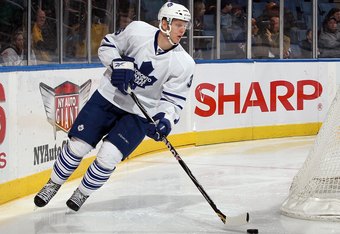 Like many around here, I am ecstatic with the return of NHL hockey. Very few things have made me as happy as seeing the boys in blue lace 'em up and go battle the evil Sens or take it to the Flyers in their own arena. However something has been pissing me off a lot at this joyous time. It is the assertion that Carl Gunnarson should be a bubble defenseman and that he should be near the bottom of the Leafs defenseman depth chart.

Read on after the jump for why I think Gunnarson is a pretty damn good defenseman and deserving of a top 4 role with the club.

Here are a few examples of what I am talking about:

Two from Mike Ulmer at mapleleafs.nhl.com (the quotes are links to the articles)

Defence: The race is between Mike Komisarek and Carl Gunnarsson for the sixth spot. A slimmed down Komisarek has impressed but Gunnarsson is a better skater who brings more speed but a less imposing presence around his own net.

With Phaneuf, Keith Aulie, Luke Schenn, John-Michael Liles and Cody Franson not really having to break a sweat to start the season October 6 against Montreal, you have three contestants, Gunnarsson, Mike Komisarek and Gardiner fighting for the remaining spot.

Two from journalists who I generally like, Jonas Siegel (my second favourite sports journalist) and Dave Shoalts:

Along with Gardiner - who is pushing the likes of Mike Komisarek, Carl Gunnarsson and Cody Franson for a job -Siegel

The Leafs’ defence is supposed to be a closed shop heading into the NHL season, with the seven roster jobs locked up. Training camp would decide who will get the job as the sixth defenceman and who will spend most of his time in the press box – Carl Gunnarsson or Mike Komisarek. -Shoalts

Offense from the back end

The Leafs last year had a lot of problems, one of which was a lack of offense from their back end. To solve that Burke went out and acquire to defenseman known for the offensive side of their games, JM Liles and Cody Franson. While I definitely do not begrudge these moves (in fact I like them), part of their offensive growth from the back end should come from giving Gunnarson more playing time.

If you had to guess, where do you think Gunnarson would rank in points by a defenseman over his career? Keeping in mind that there are 30 teams in the league and each team roles 6 defenseman at a time, many would likely think he would rank around a typical #4 or 5 defenseman or around 120th in D scoring. Lets see where he actually ranks:

*All stats come from www.hockey-reference.com
**min 30 GP was used for per game stats for one season and min 60 GP for 2 seasons

*All stats are from www.nhl.com and www.behindthenet.ca
*Min 30 GP and 1 minute of ice/60 (for both Even Strength and Power Play) was used for ranking

This paints a very different picture. While Gunnarson only produced 12 and 16 ES points in his first two seasons (ranking him as a 4th-5th defenseman and a 3rd defenseman), he did that playing just under 16 and 14 minutes in his two seasons ranking him at 100th and 164th for ice time. If we look at his per minute production it rockets him to playing at a top 30 level in his first season and top 40 his second season. Similarly his power play production would rank him as a 4th or worse defenseman. But if we look at it in regards to his meager ice time he begins to look much better. An interesting thing to note is the only time in these 4 situations where his ranking in minutes was better than his ranking in production was in his power play time in his first season.
*A caveat for this section is that his power play numbers are dealing with a tiny sample size (2 and 4 points) so the variance could very well be higher than any significance I am trying to show.

What this shows to me is that, at least offensively, Gunnarson is deserving of more minutes. From a per game perspective he has produced at the level of a 3rd defenseman (around 80th in the league), while at an ES minutes perspective he was producing at an extremely high level. Similarly his powerplay production based on his meager ice time suggests that he may be deserving of more, but due to the tiny sample size it is difficult to say this with certainty.

This discussion of production based on minutes played leads me to my next discussion point...

A very important function of defenseman (that is often overlooked by people who love looking at 'box score stats') is that of "eating minutes". Eating minutes refers to the ability of top defenseman to play a lot of minutes. Generally if a defenseman can play 20-22 minutes with good results he is playing top 4 minutes. If he can play above 22 minutes its a lot (think top 2) and above 24:30 and its pretty damn elite (17 did it last NHL season). So where does Gunnarson come in? In his first NHL season Gunnarson played 21:26 good for a tie for 76th-80th in the league (along with such terrible defenseman as Eric Brewer, Dererk Morris, Erik Johnson, and Michal Rozsival). Among rookies he ranked. Among rookies he ranked 3rd behind only Jamie McBain, who played 13 games, and the Calder Trophy winner Tyler Myers.

After a great first season in the blue and white, many were excited for his second year. However, in his second year the coaching staff lost faith in him. From the beginning they significantly cut back his minutes. After playing over 21 minutes per night and being the leafs number 4 D-man in his rookie season, Ron Wilson and co cut him back to 17:53, 17:15, 14:52, and 6:13 in his first 4 games of 2010-2011. As well his league average TOI/GP dropped to 18:14 or 144th in the league.

This may suggest to you that he was a hot rookie who is not capable of handling tough minutes. I however disagree and have some evidence for you. The Leafs made two big trades last February, first trading minute-munching Beauchemin, and then trading long-time leaf Tomas Kaberle. After the Kaberle trade Gunnarson's minutes jumped to 24:27 per night. Had he played those kind of minutes all year he would have been 18th in the league. This was during the peak of Leafs success, so it is not as if he was playing these minutes while the Leafs were losing. What this shows to me is that Gunnarson is capable of playing a lot of minutes and should be given that chance. (Note there is a misconception that Aulie was playing an absolute ton of minutes after the two trades. In the same time period Aulie was playing 21:17 or over 3 minutes less than Gunnarson).

But wait you may ask: "Was he just seeing paper thin minutes?" Well I am glad you asked, hypothetical question asker I am using as a writing crutch. Lets see:

Advanced Stats (with some basic ones mixed in)

Description of some advanced stats in case you don't know them (skip it if you feel comfortable with them).
CorsiON: I like to describe corsi as the +/- for shots. Basically it takes shots for and against while a player is on the ice and then adjusts it slightly with the players time on ice. By looking at shots instead of goals the measurement is able to increase sample size and remove goalie effects. On the other hand it assumes all shots are equal (whether this is a problem or not is a hot topic for debate). Regardless it is considered a measure of team wide possession while the player is on the ice.
SA/60: Shots against per 60 minutes
GA/60: This is the goals against your team while you are on the ice per 60 minutes.
CorsiQoC: How good your opponents are as measured by Corsi
CorsiQoT: The same but for teammates.

Please note the following are for even strength minutes:

To be honest I don't see a particularly clear picture here. But I'll try to break it down anyway:

So overall I get the following picture from these stats (I am happy to hear other interpretations): he played lots of minutes with a good quality of teammate against relatively easy competition with pretty good results (okay Corsi, but good GA and SA). In his second year his minutes dropped, his teammates got worse, his competition got harder, but his results seemed to stay more or less the same (solid but not spectacular). His Corsi (relative to his team) improved a little and he was middle of the pack in the team. Similarly his SA and GA were pretty good (SA was best on the team).

Overall I would argue that Gunnar is a good offensive defenseman and if given the opportunity (minutes both ES and PP) I think he could (edited to be clearer) produce offensively at a level equal to a number 2 defenseman (top 60 in points by a defenseman). He has shown in both his rookie season and the last 24 games of last season that he can play a lot of minutes and deserves that opportunity. Further he hasn't been playing joke minutes nor been carried by his teammates.

Finally (believe it or not) I do watch the game and I think he has looked in this preseason. He skates well, has solid positioning, and makes smart passes. I think his relatively conservative, yet offensive style of play would compliment Phaneuf's aggressive, big hitting offensive game, by both supporting his offense with his smooth passing and supporting him in his big hits by staying in position for when Phaneuf ends up out of it (by hits or shots).