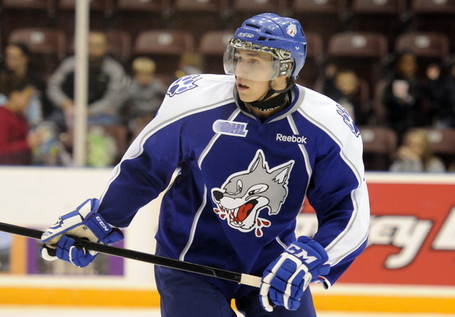 One of the challenges with this exercise is weighing current accomplishments against future potential. When you have a collection of young players between the ages of 18 and 24, some still developing in amateur leagues, others transitioning from one professional league to another, it makes comparing apples to apples exceedingly difficult. An older player might be obviously a better hockey player than a younger one, but the younger one might possess the potential to be a more important player to the organization, provided they get there. Creating a list of the Top 25 players under the age of 25 requires balancing the short-term "Who's better right now?" with a bit of analysis "Who will be better down the road?"

Picking Josh Leivo as #21 on the list of the Leafs' Top 25 Under 25 required us to consider this question to put him ahead of Jussi Rynnas. Rynnas has been a professional for five years in Finland and North America, while Leivo is in the middle of just his second season with the Sudbury Wolves of the OHL. Rynnas is an objectively better hockey player today than Leivo. But Leivo is also six years younger than the Finnish tender, and the 3rd round pick has the potential to grow into a dependable NHLer.

In this instance, potential trumped accomplishments, and the young winger gets the nod at #21.

The Leafs took a bit of a gamble on selecting Leivo in the 3rd round of the 2011 Entry Draft, 86th overall (one of the draft picks received from Philadelphia in exchange for Kris Versteeg). A strong two-way player with a lot of the raw tools necessary to be an effective top nine forward, and a frame yet to fill out (6'2", 180lbs), Leivo's stats for Subdury in his draft year weren't overly impressive; just 13 goals and 30 points in 64 games in his first season in the OHL. The boxcar stats did not paint the whole picture, as he had a real difficult time adjusting to the league in the first half of his season, taking off in January as an effective offensive player.

His strong play continued into the playoffs where he second in team scoring with 13 points in 8 playoff games as the Wolves would sweep heavily favoured Ottawa (seems familiar...) before getting swept themselves by a strong Mississauga team.

This season, Leivo's picked up right where he left off and has effectively matched all of his totals from the prior year through half of a season. In 35 games he's registered 34 points compared to 30 last year, has racked up 34 PIM compared to 37, and has improved his +/- from a -10 to even. (Flawed stat or not, this is an impressive acomplishment)

While it will be some time before Leivo's potential can be determined, Levio has certainly shown growth as a player in the roughly seven months he's been a member of the Leafs organization, and as another selection that was among the youngest draft-eligible players selected, he has time on his side.

Leivo is the first member of the list to be included in everyone's Top 25. The group consensus had him right around where he was actually picked, with me leaving him a bit lower at #24, and birky putting him the highest at #16. birky explains his ranking:

The wiry left-winger was drafted by the Leafs based largely on his excellent but brief playoff performance last year. He scored 13 points in 8 games, and finished as the second best rookie performer in the postseason. He's described as a late bloomer and plays on the top line in Sudbury with two older players, but the scoring touch he found last year has stuck around. He's a project for sure, but he seems to have the tools and just needs help putting it all together.