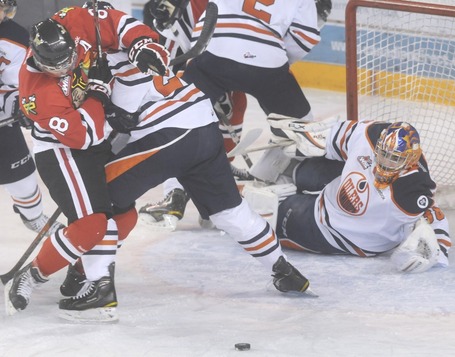 In several interviews and media appearances this season, Leafs General Manager Brian Burke has expressed his desire to add size and toughness to the forwards. By that statement Burke isn't talking about the Colton Orrs of the world; Burke's decision to waive Orr made it clear that the Leafs are not interested in adding players who fight and contribute nothing else to the team. Rather, Burke wants to add players who blend skill with physicality, who make it difficult for opposing forwards to play against them. The Leafs collective forwards rely on blistering team speed, but Burke (rightly) wants to add another dimension to this team's attack. When a team has the ability to lock down or neutralize the Leafs speed or entry into the zone, they have struggled to generate offence.

Burke wants to add that size and aggressiveness to give the team additional options when attacking offensively. Now while it seems likely that the Leafs will try to trade for such a player this season, or add that element via free agency in the summer. But it is just as likely that the Leafs will try and draft such a player who can contribute in this manner (Tyler Biggs springs to mind).

Through three and a half season with the Portland Winterhawks, winger Brad Ross has demonstrated that he may be this type of player; responsible in both ends of rink, an effective contributor offensively, the type of player who makes life difficult for opposition (through a combination of his forechecking, physical play and agitation), since his draft year has brought to mind visions of the next Darcy Tucker, a beloved Toronto super-pest who scored, fought and generally out-crazied everybody on the ice.

It seems appropriate that, after next season when Darcy Tucker's buyout finally is removed from the Leafs cap, that a potential successor may be ready to take his place. Ross checks in at #14 on our list of the Top 25 Under 25.

With no first or second round pick in the 2010 Entry Draft (the result of the Phil Kessel trade), Brian Burke shipped prospect Jimmy Hayes to the Chicago Blackhawks for the 43rd pick, which was used to select Ross, a two-way agitator from Portland, coming off a season where he accumulated 68 points in 71 games along with an eye-popping 203 penalty minutes, playing the role of defensive conscience on the Winterhawks top line alongside 4th overall pick Ryan Johansen and 5th overall pick Nino Niederreiter. Ross was projected as an agitator or pest of a forward who could also contribute offensively, and so Leaf fans immediately called to mind comparisons to Tucker, who arrived in town a wild-eyed maniac of a forechecker and evolved into a fan favourite who took no prisoners.

Ross was able to repeat his performance the following season, registering 69 points in 67 games, while managing to reduce his penalty totals to 171. This season, having emerged as a veteran leader of the WInterhawks, he plays primarily on their new top line alongside Ty Rattie and Sven Bartschi, serving a similar role as he did with Johansen and Niederreiter. But his game has matured, and he looks to be on pace to significantly improve on his point totals from the prior year (29 goals, 55 points through 44 games) and has managed to again reduce his penalty minutes, having accumulated just 112 thus far. Ross was rewarded for his continued growth as a player with an invite to the World Junior Selection Camp, and was among the final cuts from the team.

Any Leaf fan expecting the 2002 or 2006 version of Darcy Tucker where he scored 60 points, and was probably one of the Leafs three or four best forwards is probably too much to ask. Tucker's socring record for the Kamloops Blazers was significantly better than that of Ross. Offensively, Ross doesn't possess the same skill Tucker did. However, at 6'1" Ross has the ability to add strength and become more physically imposing than the 5'10" Tucker ever was, which would allow him to continue to play his high intensity forechecking game in the NHL. A more reasonable projection for Ross could be seen in Tucker's 2001 or 2003 seasons, where he contributed roughly 30 points and 100ish penalty minutes isn't out of the question. Ross' NHL equivalency which pegs him at about a 27-28 point player bears this out.

Ross could be the exact sort of third-line high-energy player Burke is looking to add to inject tenacity and truculence into his lineup without devaluing its skill. As a Leaf fan who was just a little too young to vividly remember the Clark heydays, the Quinn era Leafs solidified my bond with the Leafs. It'd be nice to have a player crazy enough to dive into the Senators bench again.

As we start to move into the Top 15, the amount of fluctuation between votes is starting to decrease. Ross cracks SkinnyFish's top 10, but is mostly receiving votes right around the 12 -14 range. From, the site's eponymous co-head:

I haven't seen a lot of Ross, obviously, and I'm pretty disappointed he didn't make it on to Canada's team this holiday season. I think that a good ceiling for Ross would be Matt Frattin. They're similar to Tucker in that they can mix it up but if you give them talented players they can chip in with a good bit of offence. It's not the sexiest ceiling but if you can develop players for your third/fourth lines and PK that can fill in for injuries it really helps you save your dough for your star players.