Scouting the NHL at the Trade Deadline

Share All sharing options for: Scouting the NHL at the Trade Deadline

The trade deadline is fast approaching, and that means looking at players who could be added to the Leafs to help their playoff push. On Monday's edition of the #MvsW podcast, John Ferguson Junior, the head of pro scouting for the San Jose Sharks, was asked by Jeff Marek :"What’s the one stat you value MOST as head pro scout of the Sharks?" JFJ stumbled around his words for a while before saying "Goals". Look everyone know that us here aren't anywhere near as good when it comes to evaluating talent as a man like John Ferguson Junior is. Aside from the box scores, he has something to judge we could never hope to have, a player's intangibles.

So let's do a bit of role playing here. We're all JFJ and we need to evaluate some talent. What do we look for and how to we value different aspects of a player's game? Well I think in the eyes of a man like JFJ, a hockey player can be broken down thusly: 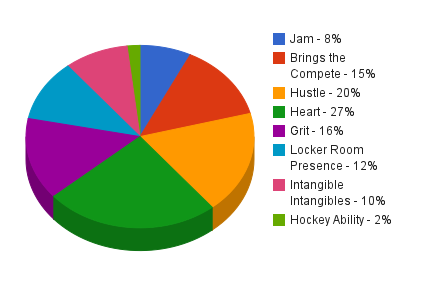 Spot on don't you think? Links after the jump.

PPP has the Zapruder film on the headshot that activated Grabbo's superskills as well as a look at his continued greatness.

Do his two goals last night have any affect on his trade value?

Have the Maple Leafs Accomplished "The Drafting Goal"?

Fighting for Stanley with a recap.

Game recap at the G&M.

An open letter to Jonas Gustavsson.

Three options for the pineapple hater.

Want a job writing hockey at Leafs Nation? Click on through.

Now the Leafs Can Enjoy the Break

Mike from VLM loves Kessel on the Off Wing.

An Optimist's Guide to Non-Playoff Teams

DGB see the glass half full.