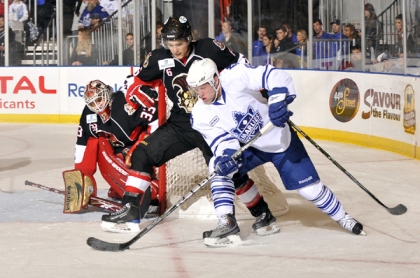 The crapshoot that is trying to develop young players into NHL calibre athletes is not easy. Each team has scores of young men who came up short in their quest to reach the show. WIth 45 players under the age of 25 either under contract to the Maple Leafs or whose rights are owned by the Leafs, there are certainly a number of these young men that will eventually fail to ever pull on a Maple Leafs sweater. In ranking the Top 25 Under 25, our job was to make an objective analysis of who are the most likely to fulfill their potential and make meaningful contributions at the NHL level. Five years from now, hopefully we'll remember some of these young players as kids that we recognized the potential they had early on. Or, we'll just pretend that this never happened.

We won't go through and look at everyone who failed to make our top 25, but since our process involved assigning ratings to the top 30, let's take a look at the five players who finished just outside the Top 25.

Devane was a surpise (to many, not a pleasant one) selection in the 3rd round of the 2009 Draft, having contributed just 17 points in 64 games for the Plymouth Whalers. The big, physical winger was the prototypical player you would have expected of Burke's new "truculence" mantra. He has shown moderate improvement since his draft, including a strong showing at this fall's Rookie Tournament, and an extended look with the Marlies before ultimately being returned to Plymouth for his overage season (23 points through 30 games as of this writing). Devane will certainly be given an opportunity with the Marlies next season, but has to be considered a bit of a longshot to be an NHL pro of any consequence.

A third round pick from the 2007 Draft, Mitchell was a strong scorer through four seasons in the OHL with the Oshawa Generals and Windsor Spitfires, he's translated to the pros as an agitating forward. In his first full professional season, he played 49 games for the Marlies recording 13 points, missing some time due to injury. He's been caught up in the added numbers this season and more injuries, notching 10 points in 10 games for Reading of the ECHL and 2 games for the Marlies. An RFA at the end of the season, the second half of this season could well be the last chance for the 22 year old to maintain his spot with the club. Mitchell and Devane actually tied in our rankings, but the Etobicoke native gets the nod due to appearing on 4 ballots versus Devane's 3.

Signed as an undrafted free agent in 2008 after a breakout season with the Seattle Thunderbirds, the versatile winger has become a favourite of Dallas Eakins with the Toronto Marlies. A strong skater capable of playing at both ends of the ice, Scott is often utilized in defensive roles as a forward matched up against other teams' top lines and on the penalty kill, he's steadily improved offensively and now in his 3rd year with the Marlies has 20 points in just 33 games, well on his way to setting a new career high as a pro. The 23-year old could well find himself a potential callup for a fourth line role in the near future.

Carrick was picked in the 5th round of the 2010 Draft, as a strong two-way player on an offensively impotent Brampton Battalion team. While not at all flashy, he has become a dependable leader for Brampton, continuing to improve his offensive totals while Brampton continued to struggle to score. As an overager he's leaned on heavily by an overachieving Battallion squad, leading the team with 33 points through 37 games. Carrick has yet to be signed by the Leafs to an Entry Level Contract, but with his continued strong play he will make a case for a spot on the Marlies next season.

Most scouts compare Granberg's game to that of his countryman (and fellow Leaf) Carl Gunnarsson, the 2010 4th round pick was a signal in the Leafs' shifting draft priorities; beginning to favour strong skaters who also had considerable time to improve (Granberg was among the youngest players selected in his draft class). The Skelleftea defender is establishing himself as a pro in Sweden's top league, and is currently in Calgary as a member of Sweden's U20 World Championship team. Granberg's contract with Skelleftea runs until 2013, so it will be at least another year before the 19-year old can even be considered for the Leafs or Marlies.

Which of the honourable mentions do you think should have been included in the Top 25?