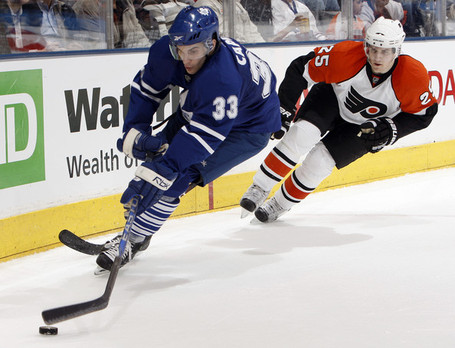 The first official member of our Top 25 is also no longer with the organization.

Yesterday afternoon news broke that the Maple Leafs had send the winger to Anaheim in exchange for Nicolas Deschamps. Chemmy covered the transaction, which amounted to a swap of two minor-league that had dropped down on their teams depth charts.

Even though Luca has fallen out of favour with the Toronto Maple Leafs, he was still a prospect of the team at the time these rankings were compiled, and so he retains his spot at #25 in our rankings.

Caputi was acquired from the Pittsburgh Penguins ahead of the 2010 trade deadline in exchange for soon-to-be UFA Alexei Ponikarovsky. Reports indicated that given the choice between Caputi and a draft pick, Leafs GM Brian Burke opted for the winger as he felt that the 2007 4th Round Draft Pick was on the verge of making the leap to the NHL, and could be an integral component of the team's youth movement.

Caputi's scoring prowess exhibitied in the OHL with the Niagara Ice Dogs and in Wilkes-Barre never seemed to translate to his NHL game. The scouting reports pegged as a "nose for the net" kind of guy, the sort of player who would take the punishment in front of the net necessary to pick up the garbage goals. But in his time with the Leafs it never seemed to materialize; not the strongest of skaters, Caputi always seemed to be unable to get to the dangerous areas in time to make good on his chances. In 26 games over parts of 2 seasons with the Leafs, Caputi registered just 1 goal and 6 points.

What really signaled the end of Luca's stint with the Maple Leafs was injuries; after a strong 2010-11 camp where many thought he deserved to make the team out of camp, Caputi suffered a hernia that would keep him out for much of the season, limiting him to just 7 NHL games and 13 AHL games. During a season largely spent on the shelf, the emergence of Nazem Kadri, the arrival of Joe Colborne, and the development of Jerry D'Amigo and Matt Frattin served to knock Luca down the depth chart. Another injury at the start of the current season limited him to just 21 games with the Marlies, where he registered just 3 points.

Still only 23 years old, if Luca can rediscover his game he probably has a chance to make an impression on a pretty awful Anaheim team, especially if they go into firesale mode in the next few weeks. At the very least he proved himself to be a competent fourth-liner with the Maple Leafs, and without any expectations of the player becoming more than that, he could succeed in such a role for the Ducks. In return the Leafs got back a younger player who already has just one less goal for the Marlies this season than Caputi did.

Caputi is the first player in our rankings that was unanimously selected by all seven voters, though four of the seven did not have him in their top 25.

Here's Plea From A Cat Named Felix to explain his ranking of #28 for Caputi:

Initially I ranked Caputi so low because he is a pretty terrible hockey player. He has played in a seemingly impossible 26 games with the Maple Leafs and I cannot remember a single thing that he did. He was being dragged down the depth chart like he was wearing a pair of cement shoes. I don't want to embellish anything, but it was obvious that his stock had taken quite a dive. Then Brian Burke traded him for a guy I've never heard of. So he probably should have been ranked even lower.