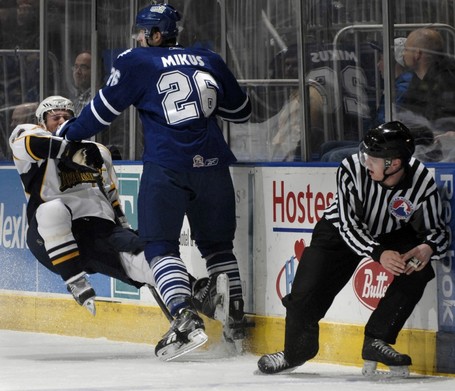 Generally speaking, if you manage to get a dependable AHL defenceman out of your 5th round draft pick, that's probably a win for your scouting staff.

Halfway through his third professional season in North America, Juraj Mikus is soldifying his spot on the Toronto Marlies blueline, enough to make him #24 in our list of the Top 25 prospects under 25.

The rangy Slovak was a 5th round pick back in 2007, after collecting an impressive 9 goals and 24 points in 42 games as an 18-year old in Slovakia's U20 league, and playing 22 games for Dukla Trencin in the top Slovakian professional league. At the draft Mikus was considered a long-term project, but a player that also possessed all of the raw skills to be an effective two-way defender, rolled up into a 6'4" package.

His rookie season with the Marlies was an overall success. While the 2009-10 Marlies were not particularly strong, Mikus adapted to his new culture and continued to add weight to handle the rigors of the North American game, tallying 5 goals and 23 points in 68 games.

The following season an influx of veteran defenders and new young acquisitions made competition for ice time much more fierce, and injuries took a toll on the club. Mikus found himself rotated in and out of the lineup quite frequently and registered just 4 goals and 16 points while playing in just 56 games.

MIkus has re-established his position on the Marlies' depth chart this season. He has been a regular fixture on the blueline through the first half of the season, playing the most games out of all defenceman. While his offence has taken a step back (just 5 points through 33 games) he has been used by Marlies coach Dallas Eakins in all situations and is being counted on as a key contributor to the first-half success of the Toronto farm club.

Mikus remains a bit of a project for whom there is still potential that remains untapped. Now at 6'4" and 210 lbs. he's developed into a sizable defender that is sound positionally in his own end, but has managed to retain much of the puck-moving and skating abilities that made him an attractive draft choice in the first place. Having just turned 23 at the end of November he still has some time before he reaches his peak as a player, and while he is a pending Restricted Free Agent at the end of this season, the likely departure of other veteran defenders such as Jeff Finger and Matt Lashoff could position Mikus to return next season as a veteran stalwart on the Marlies blueline.

Mikus' ratings actually portrayed his current position within the Leafs organization pretty nicely, with a few voters giving him consideration as a top 30 prospect, while Professional Defenceman Hater birky left him off entirely. Two voters also seemed to recognize the potential Mikus still possesses, and awarded him positions in their top 20, enough to edge Caputi for #24 on the list.

Here's PPP to explain his choice of Mikus as #18.

Burtch took a look a Mikus earlier in the year alongside fellow forgotten prospect Korbinian Holzer that meshed with what I've seen of him live. His stats this year don't leap off of the screen at you by any stretch of the imagination but he's still young. From the handful of games I've seen of him he reminds me a lot of Gunnarsson in the sense that he has decent size but relies more on his stick and positioning and is calm with the puck.

He is in a decent group of defensive prospects - alongside Holzer and Blacker on the Marlies - and the Leafs' blueline is young but I seem him as the kind of unsexy prospect that sees others moved out of his way to plus other holes. There's a high likelihood that this choice will look really bad in a year or two but I think Mikus' is a long hold for the buds. The tools are there, it's just a matter of them developing and a spot opening on the big club. Or basically, there's everything to go.