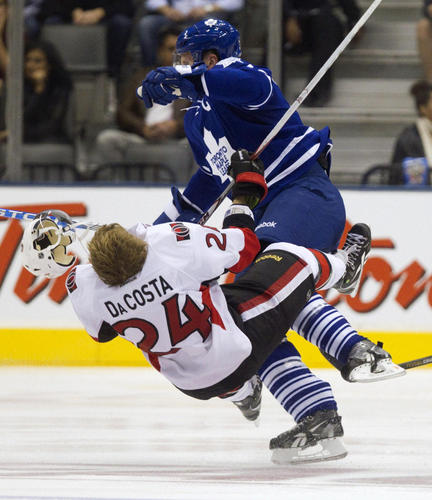 "I had a linesman tell our coach last week that he's had players say that to him. I'm not hitting anybody, I'm not getting suspended. That's what I worry about."

I was wondering if that statement is actually true, and thankfully for us, NHL.com tracks hits on both the individual and team level, making the claim pretty easy to check out. So I added up all the hits from the last 4 seasons and the first half of this season, then divided them by the number of games played to see whether the frequency of hitting has changed noticeably over the past few years.

As you can see, the number of hits being thrown in the NHL has actually gone up in the past few seasons. If this season's pace keeps up, there will be nearly 7000 more hits thrown this year than there were in 2007-08. So what does this tell us? It tells us that there are a bunch of old curmudgeons around, yelling at young whippersnappers to get off their lawn, who aren't against change because of what it means, but because it's change at all. The numbers are pretty clear, though - there's just as much hitting in the game this season as there has been in any other recent season.