And Then Josh Leivo Woke Up (Fun With Graphs!)

Leafs prospect, and OHL Player of the Week, breaks out from his sleepy September with Sudbury to score 6 goals in 3 games. How does his production stack up vs. other prospects?

Share All sharing options for: And Then Josh Leivo Woke Up (Fun With Graphs!)

Josh Leivo lit the lamp a lot for Sudbury in the pre-season. He led the entire IIHF World Junior Club Cup in scoring as the Wolves went on to win the 2nd annual edition of the IIHF tournament. Unfortunately that success didn't translate into early production through September for the Wolves, as he only potted 1 goal and 2 assists through the team's first 5 games. Sudbury came through that brief early season segment relatively unscathed going 2-3-0 despite low production from their offensive leader.

Now the team can consider itself to be back on a roll, largely driven by the production of Leivo, as they won 3 games in a row, with their sniper registering 6 goals in the process. Leivo now has produced 13 goals and 7 assists through 14 games in the 2012-13 season in all competitions. That amounts to production of 1.43 points per game so far for a player that will need to lead Sudbury in scoring if they hope to make any hay this year in the OHL.

Video highlights of the first two games can be found by following the links to the OHL video-feed below:

That Sunday game saw Leivo post a hat-trick versus the Ottawa 67's on the road, and this likely cemented his position as OHL player of the week. Actually - it's quite possible that Leivo's top competition for the award at the time was fellow Leafs prospect Tyler Biggs - the only player with a more significant point streak underway at the time (Biggs had produced 5 goals and 2 assists for 7 points through his last 4 games).

All in all, the early returns for the Leafs large over-agers should be taken as positive. David Broll is also off to a solid start, producing 2 goals and 6 assists for 8 points through his first 7 games this year with the Soo Greyhounds.

The key distinction between Leivo and his two fellow Leaf prospects Broll and Biggs is the following - he isn't playing with another top OHL scorer to help drive his offensive production. Broll is playing with Nick Cousins (2nd in OHL scoring) while Biggs is playing with Boone Jenner (1st in OHL scoring). Last year - Leivo's breakout season at the junior level - Sudbury was led by OHL leading scorer Michael Sgarbossa who posted 102 points in 66 games. Leivo likely learned a lot by suiting up alongside the productive over-ager, but now that he's largely left to his own devices he's demonstrating an ability to produce offensively without huge amounts of support.

Michael Kantor, Nathan Pancel, and OHL rookies Dominik Kubalik and Dominik Kahun, have provided the majority of offensive support so far this season. Kantor is in his 4th OHL season, and while he has 7 points in 8 games so far this year, he has never produced over 11 goals or 29 points in a single season prior. Pancel is a diminutive 5'10" winger in his draft year that produced 44 points last year as an OHL rookie. So far this year he's on a point per game pace so he may be Leivo's best support this season.

Leivo does have a propensity to score in bunches. Last year he had bursts of 6 goals in 6 gp, 13 goals in 15 gp, and 10 goals in 14 gp. Thus concentrating 29 of his goals into 38 games when he only registered 3 other goals in the other 28 games of the season. This has generally been true of most goal scorers though, so it's nothing to be particularly concerned about long term.

Leivo's late birthday gives hope to those that envision prospects blooming over time, so while his 19 year old OHL production should be taken with a grain of salt, don't forget that he is far from the only 19 year old still in the league (thanks NHL lockout!), and his production is beginning to align with some players who were selected quite a bit ahead of him in the 2011 NHL Entry Draft.

Take a look at the graph below charting the OHL point production vs. age in days (click on the image for a larger version) and you'll realize that Leivo's rate of production actually closely matches that of more highly touted prospects such as the Jets' Mark Schiefele - who currently is 3rd in OHL scoring and suits up for the Barrie Colts - a frankly much deeper OHL side 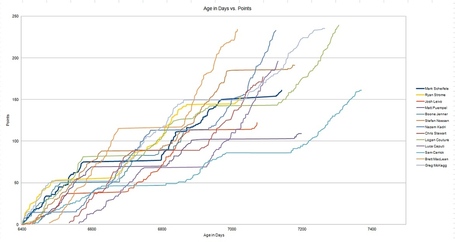 The age selected for the start point was 6402 days (17 years, 196 days) because that is the age Scheifele joined the OHL. Beyond that it was completely arbitrary, but it captures the player's production in their pre-draft year, and then onwards to either their current totals or their final amounts. I included a variety of past and present prospects from the OHL for comparison's sake.

Take note that Brett Maclean and Luca Caputi both put up very solid numbers and eventually became AHL regulars. By way of explanation we could mention that Maclean was playing on the Oshawa Generals and his numbers took off when John Tavares joined the OHL, and Caputi didn't really produce a lot until his final year as a 19 year old when he went gang busters as the primary option with Niagara.

Also on the chart are Logan Couture, Chris Stewart, Nazem Kadri, Greg McKegg, and Sam Carrick - the latter 3 for Leaf fan comparisons. Note how excellently Kadri produced - there is serious reason to think he will be productive in the NHL with these numbers.

Just as an alternative means of comparison, I also organized the same data set by GP vs. PPG to do away with the confusion around birth dates introducing gaps in the data. The results are shown on the graph below: 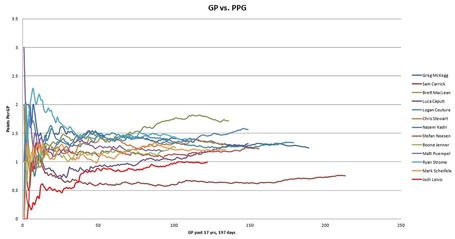 Again here it is worth noting that Leivo's numbers are quickly climbing to join the core of that group of top prospects, though he is obviously at the lower tier of the group (as the only 3rd rounder in the bunch that makes some sense). Note that 5th rounder Sam Carrick from the 2010 draft is the line along the bottom... this may indicate some of the gap between player selections. Carrick was a top producer for the Brampton Battalion in his final 2 years in the OHL, and his production still never really climbed to the levels seen by the rest of the group.

The issue with much of this data is it's purely base on points production vs. age and time. There is zero distinction made for PP production vs. ES or SH. There is no accounting for line mates, though I would suggest that they have a very large impact. The assumption is that many of these players play with players of comparable abilities, and are afforded comparable opportunities.

Playing with the leading scorer in the OHL last year definitely helped Leivo, but if he can maintain his current production there is some indication that it wasn't entirely Sgarbossa driving the bus. Perhaps in the end Leivo will develop into a useful offensive player in the NHL, perhaps not - but at the least, his numbers provide reason for pause and discussion.