We're staring down the barrel of a cancelled season. What should we write about?

We here at PPP Heavy Industries and Kitten Ranching GmBH are always eager to improve the community's experience at the site. In a perfect world, we'd ice Bettman, Daly, Fehr, Jacobs, and a couple of other owners before taking strategic hostages in order to get the season going. However, since we don't live in a perfect world we've decided that the next best thing is to ask you people what you want to read about during the inevitable year-long lockout. We're pretty sure that we need to come up with something before you guys start cracking each other's heads open and feasting on the goo (ie talking Tyler Biggs non-stop).

Share your suggestions with our VP of User Experience. 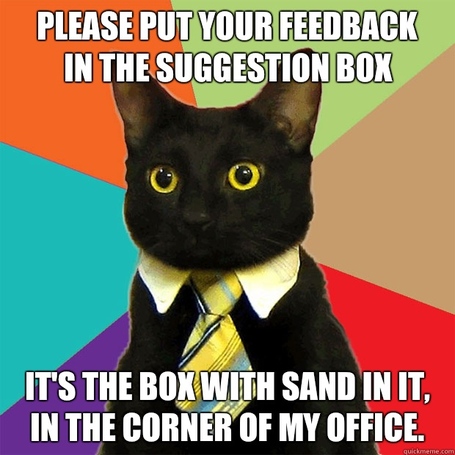 Not sure why his suggestion box has sand in it but give us ideas please.

Jake Gardiner and the offensive potential lurking just beneath the surface
The kid's good but how good could he be?

2008 - Worldwide Premiere of Bacon Yada!
If you're not familiar with this video then you need to be

2009 - What do the Leafs do at Centre?
WE ARE STILL ASKING THE SAME FUCKING QUESTION

2011 - Another goalie injury, another controversy in net?
Gionta should be arrested the next time he's in Toronto