Roberto Luongo Is The Best Option The Leafs Have In Goal

Generational Talent, Experience, Locked Up Long Term, Why All The Hand Wringing?

Share All sharing options for: Roberto Luongo Is The Best Option The Leafs Have In Goal

I'd like to think that there's more to the Leafs problems as a team than the fact that we haven't had a reliable goalie since Hall of Famer Ed Belfour left town following the last season prior to the lockout 2003-04. This was a man that set the Leafs team record for wins in a season as a 37 year old grizzled veteran, that posted back to back seasons of 30+ wins, and recorded a .922 and .918 save percentage in his only years in blue and white. In the 2002-03 season he finished 5th in the NHL in Save Percentage, 5th in shut outs, and 3rd in wins. He'd finish 3rd in wins again in the 2003-04 season.

I'd like to think there's a lot more to the Leaf's woes than the fact that since the lockout, three of the Leafs starting goalies (Raycroft, Gustavsson, Toskala) have been on average WORSE than Steve Mason over the past 6 seasons of the NHL. The others (Reimer and Giguere) have been too injured to accurately assess in their time in Toronto.

As much as I'd like to think these things, it gets increasingly more difficult with every passing (non-lockout) year.

14 of the top 15 goaltending seasons for a Maple Leaf since the 1983-84 season have been played by 4 men. Felix Potvin, Ed Belfour, Curtis Joseph, and Allan Bester. In a statistical comparison to their peers in goal, it is worth noting that those 4 goalies were above average in 11 of the 14 years they played for the Leafs. Bester, Joseph, and Belfour were all below average in their final seasons with the team, while Felix Potvin never offered a below average seasonal effort in goal for the Leafs.

The other season in the top 15 was played by James Reimer two years ago as a rookie. Unfortunately he followed it up with the 5th worst on record this past season... so let's just say when it comes to Reimer the jury is still out. He's demonstrated he has the ability to play at a high level in the NHL, but he's also had an injury plagued campaign at that level - which unfortunately was a pattern for him at lower levels in the AHL and CHL.

So in the midst of all the Leaf fan-angst around who they should allow to patrol the nets, and the slump that Ben Scrivens has been mired in to start this season (despite the fact that the Marlies are on a recent winning streak), I figured I'd take a closer look at goaltender careers, and whether or not we really need to stress about the likelihood of adding a player like Roberto Luongo via trade.

Here's the concern around Luongo as I have seen it discussed in Leaf land: He's 33 and his contract is expensive and lengthy. If we're on the hook for the remainder we should all be concerned about the fact that he's aging rapidly and old goalies don't do well in the NHL. I myself have shared some of these concerns, to the point that early on in the Luongo trade discussion, I typically found I was arguing AGAINST adding the franchise caliber guy who has been one of the top 3 goalies in the NHL for the past 5-10 years.

His playoff resume is less than exemplary when it comes to winning Stanley Cups, but then, so are the rest of the Leafs, so that really shouldn't mean he has no right to play here. If we waited around for Cup Winners only, we'd never get this damn thing off the ground.

In an effort to collect as much data about this as possible I decided to look into this aging goalie question in depth. I mean a lot of depth... like I collected seasonal save percentage data on every NHL goaltender to play 30 or more games since 1984. Now - I'm actually making fairly extensive efforts to use this data in a variety of ways. I'm also looking to expand the data set to goaltenders outside the NHL, and likely refine it to a game by game basis, though at the moment I haven't done that. In fact my brother and I are working towards submitting a research paper to sports journals on information related to what I was looking into with this data set, so I'm being as thorough as I can when I look into this information.

So what does all this information about NHL goalies show us and what are the limitations of the data? Well - the first part I can answer - the 2nd part is what the research paper is about. The data set shows fairly conclusively that there is virtually no correlation between a goaltender's age and his seasonal save percentage.

How I tabulated this was I determined the number of standard deviations a goaltender was above or below the seasonal mean save percentage for goalies with 30+ gp. This gave me a baseline reading for how goalies compare to their peers in any given season, and allows for comparison across generations. It let's me say pretty damn conclusively that Dominik Hasek is basically the most dominant goalie of the last 30 years of NHL hockey. 3 of the top 6 goaltender seasons since 1984 are Hasek's, and that improves to 5 of the top 11. No other goalie's name occurs in the top 21 seasons more than twice (once you get to 23 Patrick Roy has his 3rd season).

It also tells me that Felix Potvin is the best Leaf goalie we've seen since 1984. His 1992-93 season ranks 25th amongst all goaltender seasons since save percentage was a recorded statistic by the NHL. Curtis Joseph is the only other former Leaf goalie to rank ahead of Potvin on the list, although that also occurred in 1992-93 and he was playing for St. Louis at the time. This goes a long way to explaining that epic Leafs/Blues series that year, as those two were the top goalies in the NHL in 1992-93 by a fairly large margin. Third best goalie in 1992-93? Ed Belfour with his best career season in comparison to his peers - what is it with former Leafs and 1992-93?

So all of this data is pretty interesting to explore, but if you explore the chart below, you'll observe that the correlation between goaltender performance and age is nil. Goaltender performance may not be random, but it's NOT related to the age of the goalie playing the position at the NHL level. 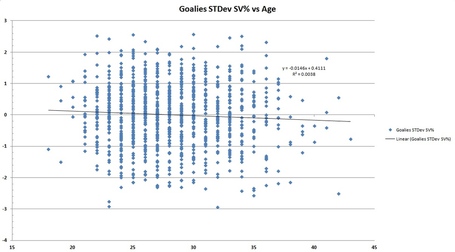 In fact - according to the analysis in our current research - while there seems to be an attrition factor as age progresses, performance actually seems to IMPROVE with age when other factors are controlled for.

So what are the key issues with Luongo if not his age and skill degradation then? Well - most likely the question becomes is the guy healthy, and can he stay healthy? If everyone remembers the tail end of Dominik Hasek's career it was marred by hip injury after hip injury. Ed Belfour's back started to act up on him. Martin Brodeur has also had back issues in recent seasons.

So physical degradation appears to be the problem. Dwayne Roloson played a relatively healthy and consistent game well past 40. Tim Thomas has been a regular Vezina candidate in recent years and he's 37, but how long can that last?

Well let's look at Luongo's career injury history. Since entering the NHL with the NY Islanders in 1999-00, Luongo has missed 58 games - with 1 of those being for personal reasons. That's 57 games due to injury TOTAL, with the longest of those being a 24 game stretch in January of 2009 with a groin injury. 13 of those games were missed with a sprained ankle in april of 2002, and 6 of those games were missed with fractured ribs in November of 2009. That amounts to three distinct injury situations totalling 43 of the games he's missed, and there's another 4 game stretch in 2001 where he had a lacerated forearm (unlikely to recur).

He sprained his ankle a decade ago - I'm not worried about that. He pulled his groin around 4 years ago, that's sort of in the distant past. Do we really think this is an ongoing problem for him? I guess what I'm saying is - yes it's possible he will start to break down physically - in fact it's quite likely that process begins in the next 5 years, but there's no history to say we should expect him to be a wreck long term.

Ed Belfour signed in Toronto as a UFA and he HAD a long history of back issues. He missed an increasing number of games with the Leafs but he joined the club when he was 37. Luongo is a few years away from that issue, and lacks the prior history.

The other reason I would say Leaf fans shouldn't be so cautious on the front of an aging goaltender is, much of the Leafs success historically has come with veteran netminders:

Honestly - great goalies have always seemed to make it to they're late 30's or even past 40 - Sawchuk, Plante, Esposito, Hainsworth, Bower, Hasek, Belfour, Brodeur... this doesn't seem like an impossibility for a guy with Luongo's record and health.

If you examine his results above, Luongo has NEVER had an NHL season with 30+ games played where he produced below average numbers. He also hasn't had a single season with all world level numbers like a Hasek or Roy. But that doesn't mean he's inferior to a goalie like Martin Brodeur, who has actually produced below average save percentages in 5 of his 18 NHL seasons with 30+ gp, or almost 1/3rd of them.

Luongo is actually AMAZINGLY consistent. This is the key part to all of this discussion. Only 3 goalies to play 30+ games more than once since 1984-85 have a higher average playing level than Luongo. In order they are Dominik Hasek (1.574133), Patrick Roy (1.192699) and Tim Thomas (1.098202). Luongo is fourth on the list with an average Save Percentage that is 0.989847 above the mean for NHL starters. Lundqvist is fifth at 0.95119, and then Roman Cechmanek, Pekka Rinne, Niklas Backstrom, Manny Legace, and Tomas Vokoun round out the top 10 over the past 28 years. That makes Luongo the 2nd best goalie still active - and he's AVAILABLE.

*For those of you who are curious - Martin Brodeur ranks 20th, behind Craig Anderson, Jonas Hiller, Miikka Kiprusoff, Ryan Miller and Jaroslav Halak amongst others. Carey Price is even further down the list at 32nd overall - take that HABS!*

Luongo may not provide spectacular all-world netminding for the Leafs - but we don't NEED him to. As we have seen before - the Leafs would have made the NHL Playoffs with AVERAGE goaltending. If Luongo can provide that at the minimum, why would we reject it out of hand?