Share All sharing options for: Team Holzer vs. Team Aulie 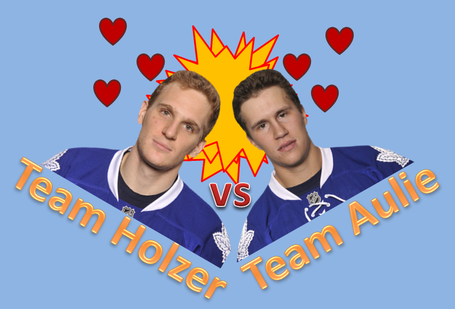 With news that Carl Gunnarsson tweaked his knee and will require an MRI after a collision with strip club connoisseur Jay Rosehill at today's practice, instantly we began to think who might get called up to replace him watch games from the press box. I'm of the belief it should be Korbinian Holzer, who should have found some icetime during his earlier time up spent eating stale popcorn. Birky is of the belief that The Wookie Keith Aulie deserves to suck defensively in front of 20,000 fans instead of 2,000.

We found ourselves at an impasse, so we're going to let you, the loyal PPP members, decide who Burke should call up to fill in for Gunnarsson, should he miss games with this "lower body injury".

Follow the jump for some pandering by birky and meI to get you to vote our way in the PPP Poll.

First off, birky on Aulie:

Keith Aulie is probably the third or fourth best defenseman on the Toronto Marlies at the moment. Reports indicate Jesse Blacker and Korbinian Holzer have been the better players this season. But I still think the Leafs will recall Aulie should Carl Gunnarsson be seriously injured. Back in October, Mike Komisarek broke his arm and went on IR. The Leafs originally recalled Holzer, but did not use him in a game. They then sent him down seven days later, and recalled Keith Aulie, who went on to play fifteen games with the Leafs. He was finally sent back to the Marlies on February 1st, when John Michael Liles returned from his concussion. Holzer is probably the better player right now, but three things stand in his way of ice time with the Leafs: Aulie has a history playing [poorly] with Phaneuf, the Leafs seem to think he's NHL ready, and he plays the left side like Gunnarsson.

Now myself, SkinnyFish, on why Holzer is far superior to Aulie:

He's German which means he's one of the most efficient defensemen in the NHL. He's got a truly bitching first name; Korbinian. Such a name is generally reserved for kings and emperors, but how cool is it that the Leafs can have it be the name of a 3rd pairing defenseman? He's a former Olympian, having played on Team Germany in Vancouver. While not a wookie like Aulie, he's no shrimp standing 6'3" tall and fleet of foot to boot. Also, he's obviously the prettier of the two. And frankly, he can't be any worse than Keith Aulie at the NHL level right?