Return of the Dead Puck Era My Ass

Share All sharing options for: Return of the Dead Puck Era My Ass

Friend of the blog Justin Bourne put up a post on The Score's Backhand Shelf that I disagree with. Let me tell you why. The post titled "The Sedins and the Numbers Agree: Dead Puck Era Hockey is Creeping Back into the NHL", references an article in the Montreal Gazette Vancouver Province by Ed Willes the meat and potatoes quote from which is:

This year, goals in the NHL are down for the third straight season.

Now, in and by itself, that development isn’t overly alarming. We’re talking about three-10ths of a goal per game between the 2008-09 season and this year. But it’s also part of a trend that’s seen a steady downturn in goal production since the 2005-06 season, and that is alarming.

I'll spare you most of the quick, thoughtless math and the whining by the Sedin Twins regarding the type of system hockey played by their Western Conference rivals that Ed uses to "back up" his headline, but here are some good ones:

"You look at every game now in the Western Conference. They're extremely tight and there aren't a lot of scoring chances." - Author note: One of the Sedins, I'm not exactly sure which. Nobody is.

We trust we don't have to explain the correlation between goals and power plays.

Oh but please do Ed. No? Odd, seems like you'd want to explain such an 'easy correlation' to further back up your claims. But Ed doesn't, most likely because Ed doesn't know how.

Follow me after the jump for more on Wille's unfounded hypothesizing, and my own theory behind the drop in goals since the lockout. (Hint: It's goaltending.)

Along with vague remarks about a drop in powerplays (Aside: What's more exciting to watch, a game in which the fluidity of hockey that we love so much is nullified by endless whistles and powerplays; or a game in which hockey is played as it is meant to be 5on5 with constant ebb and flow?), Willes also blames the coaches and the players for the lack of scoring:

The sense here, moreover, isn't that the officiating standard has lapsed. Players have simply adapted. They've been drilled in the new game for almost seven full seasons now and if we know one thing about the contemporary NHL, we know it's not under-coached.

Coaches, in fact, remain at the root of the problem. A few have embraced the spirit of change. The vast majority have opted for a defence-first system.

Sure, whatever. Enough of Mr. Willes' ode to a game played by the Sedin Twins in which merely looking at them funny gets you two minutes in the box. Let's get to the real reason behind the NHL's drop in goals, which is actually a real thing. Since the lockout, a team's average goals per games have fallen from 3.03 to 2.67 this season. Over a full 82 game season, that's 30 less goals scored. 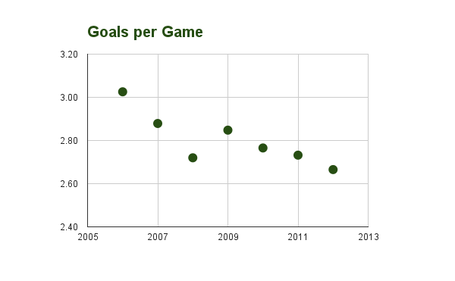 That seems pretty significant. What could be causing it? Willes suggests lack of PP time (Author's note: BCWW) and/or defensively oriented systems (Author's note: The standard MSM uneducated go-to answer) being the reason(s) for this. I'm not sold. As the Lightning showed against the Flyers earlier this year, defensive systems are all about limited an opposing team's shots on goals. So it therefore makes sense to look at shots on goals since the lockout. If defensive systems and lack of PP are at fault, surely shots on goals will be down: 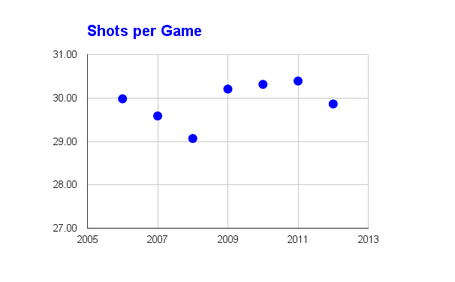 But but but Ed said.

So let's recap. Goals are going down, yet shots on goals remain the same. What comes become a shot on goal and a potential goal? Oh right! The goaltender! Maybe goalies have something to do with all this "goalless nonsense".

Ever watch a hockey game from the pre-Patrick Roy era? Total gong show. Goalies have been the last players in hockey to "evolve" their play style to catch up with the rest of the league's elite levels. Now that's not to say that the greats of old weren't great, they were, but the fire-wagon hockey of the 70s and 80s would have been a lot different have guys like Hasek, Brodeur, Roy, and Lundqvist been around back then. So let's look at how the goalies have been doing since the lockout shall we? 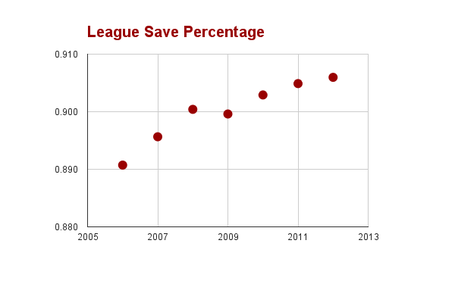 (Author's note: This data has had EN goals removed for proper save percentage calculations.)

There you have it folks, the reason goals are down in the NHL: Goalies are getting better at keeping pucks out of the net. (Author's note: That slight downturn for 2009? Two words: Vesa Toskala)

Need more evidence? Here's a list of the all-time best seasons by a goalie for save percentage ever. Four, FOUR of the top 10 seasons EVER are going on right this very moment. Another happened last season. Sure looks like goalies have gotten their collective shit together to me.

The Dead Puck Era was categorized by the relative freedom one enjoyed while clutching, grabbing, holding, and hooking whomever they wanted. That's a thing of the past. Powerplays were up after the lockout because players hadn't adapted yet and were getting called on it. Now they've realized doing so is a no-no and the game have opened up. Coaches have used the trap since the dawn of time, and shots on goal are relatively unchanged. Goalies however are better than ever before, and putting a puck past them is now truly an accomplishment. (Author's note: Seriously Gretzky is overrated.)

Shut up about the Dead Puck Era already, because like it's namesake, it too is dead.

All data can be found here. Compiled from NHL.com

Post script: Personally I don't find the current "lack" of goals to be a problem. I think hockey is better than ever. I don't want to watch a game where a full quarter of it is spent on special teams because that's real fucking boring. The longer the game goes between whistles the better. I wrote this post because I'm tired of reading what I consider to be terrible and pedantic articles that I feel only further ignorance within hockey's fan base.