Share All sharing options for: Leafs 1, Employers of Matt Cooke 0

In life, we are all forced to do things we really don't want to do. Take me for example. As a board-certified massage therapist, every day I have to work on people from all walks of life who think that just because I'm "comfortable" with their nudity, suddenly I must be their psychiatrist or something. Like this one client I have, I'll call him "Howard B." Petulant and with eyes swimming with unfulfilled dreams, the moment he gets his towel on he begins to drone on and on and on about being a professional laughingstock, swearing his ass off the whole while. I just try and get through it. The whole time he's ranting, all I'm thinking is, "Please God, don't let him get wood" and, "Really? A Goatee? In 2012?!"

The point I'm making is this, we all have things we dread but have to face. Yesterday it was the Leafs having to play the Pittsburgh Penguins for the second night in a row. Wednesday's game, coming off as a diabolical stream of "if only's" which allowed the Pens to come all the way back from 4-1 in the 3rd to winning in overtime, only stoked my anxiety. To say that after the collapse in game one I was dreading game two would be an understatement; I haven't had such mixed feelings about a back to back since the final scene in "Requiem for a Dream."

As it turned out, my fear was for naught, as the Leafs, led by Morweena, MAN's own Tebow, James Reimer, bored us and the Pens to sleep with a 1-0 shutout. Shaky for the first few minutes, Reimer eventually returned to his pre-scrambled eggs-brain form by doing what we've seen him do so well: Making cool-headed positioning decisions and simply allowing the puck to hit him. The natural by-product of this is a Leafs team who trust that he's got their back, and go out and score goal after goal after goal. Not last night, I'm saying before. Like the back half of last season, remember? But still.

In many ways the game was a study in opposites: Just as ONE is the opposite of NONE, so too is the sunny, humble and likable Reimer the inverse of the detestable and morally corrupt Matt Cooke. 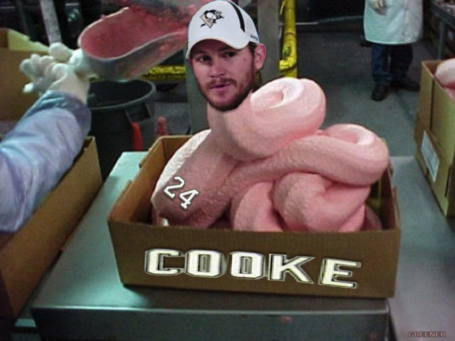 Cooke, seen here in the trainers room in his natural form, as the Pink Slime McDonald's just banned from its meat, has made a career of cheap shotting, diving, checking from behind and going knee on knee. Hilarious traits that his boss and world class hypocrite Mario Lemieux used to call "Things that are ruining our game" but now calls, "My sometime alternate captain doing what he needs to do to be effective". But wait, I'm sorry. I forgot that one of the dramas around the Penguins this season is the heartwarming story of how Matt Cooke is "reinventing" himself. What's he reinventing himself into? Well it certainly isn't into the bloodied speed bag at the other end of Mike Brown's fists. The manly Cooke couldn't get Brown to turn and face the boards so he gamely fled the scene of that potential perfect crime.

With 8 goals in 51 games and just one goal in his last 20, you have to wonder how long this peace filled epiphany of Cooke's is going to last. I think if I were a player on a team facing the Penguins in the next two weeks, I'd be having conversations with loved ones that start like this: "Honey, If anything should happen to me..."

Meet me on twitter @Le_Greener where I'll take you out for some Harvey's and RT the shit out of you.